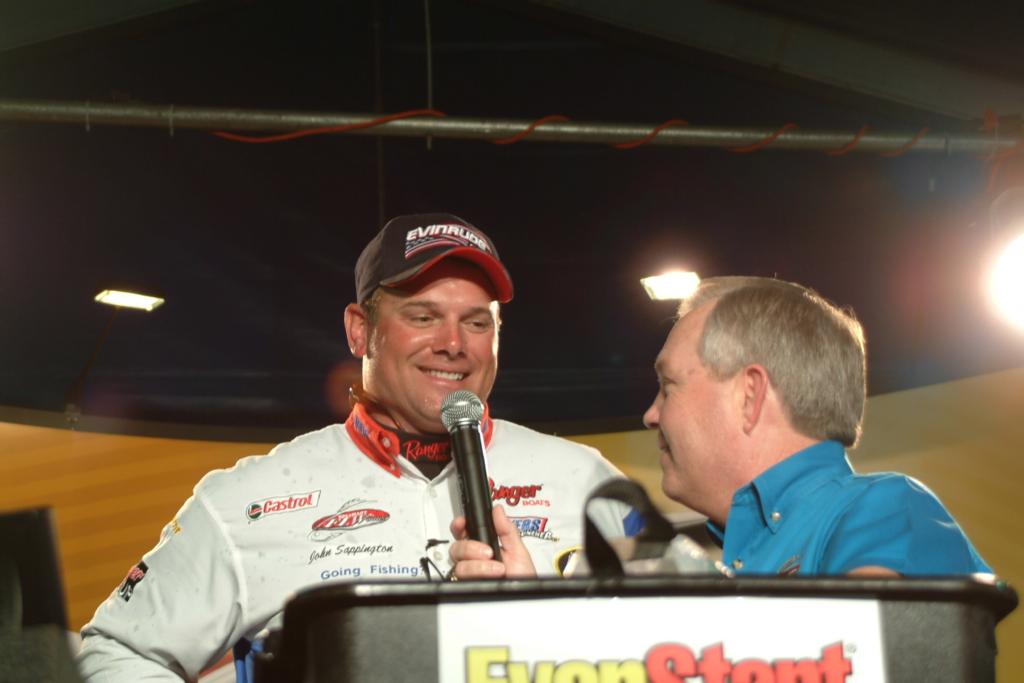 A former champ returns … Opening day of the FLW Tour Lake Okeechobee event marked the return of Snickers pro John Sappington, who is back after a season-long absence. Sappington was involved in a frightening accident on the Atchafalaya Basin in February 2004 during practice for the FLW Tour event there. His back and neck sustained severe injuries and Sappington, who required the use of a medical halo during his recovery, was forced to sit out the remainder of the 2004 season. His return was met with cheers and well-wishes for the former FLW Tour champion, who caught a respectable limit Wednesday weighing 8 pounds, 12 ounces, good for 60th. … “I appreciate everybody out there,” Sappington said. “This is my second family. I miss (my family), but when I’m at home I miss here.”

A rookie earns his stripes … Lakeland, Fla., pro Bobby Lane showed he has what it takes to fish with the big boys with a day-one-leading limit of 23 pounds, 8 ounces on his first-ever day of FLW Tour competition. Lane is no stranger to the top of the leaderboard, though, having ranked sixth in the 2004 EverStart Series Eastern Division standings. Lane is also no stranger to Okeechobee – he finished fifth here two weeks ago at the EverStart Series Southeast Division event.

It’s (not) in the bag … Banana Boat pro Kevin Vida had the hard-luck story of the day thanks to a fish gone airborne. Vida had a limit in the bag as he prepared to leave his boat for weigh-in, and upon handing off his sack of bass to get off the boat, a fish that weighed an estimated pound and a half leapt from the bag back into the water. Vida’s four-fish stringer put him in 42nd place, but with an extra pound and a half added on to that total, Vida would have placed approximately 10 places higher. … Vida’s advice? “Hold your own bag.”

Must be something in the water … It appears as if Tennessee pro Jason Abram may have found the good luck that Kevin Vida lost. At one point during the day, Abram reeled in what he thought was a fish but was in fact a crankbait. After losing the crankbait he’d been using, Abram tied on the one he’d caught from the lake. Abram went on to catch four fish on the newfound bait and lost it no fewer than four times – only to find it each time. Said Abram, “If that ain’t a fish story, I don’t know what is.”

Kicked in the Shins … 2004 Land O’Lakes Angler of the Year Shinichi Fukae of Osaka, Japan, fell short of expectations Wednesday, weighing in an uncharacteristically low three bass that totaled 4 pounds, 5 ounces that landed him in 143rd. As for potential explanations for the shortfall, weighmaster Charlie Evans suggested it could be Fukae’s offseason marriage to longtime girlfriend Miyuki Nonaka.

1373-0: Total weight, in pounds and ounces, of fish caught by the pros Wednesday.

591-10: Total weight, in pounds and ounces, of fish caught by the co-anglers Wednesday.

191: The number of pros who caught bass in today’s competition.

200: The number of pros fishing in today’s tournament.

102: Total number of five-bass limits caught by the pros.

8-15: Weight, in pounds and ounces, of pro Bobby Lane’s bass that earned day-one big-bass honors in the Pro Division.

7-5: Weight, in pounds and ounces, of the bass caught by Larry Dix that claimed co-angler big-bass honors.

“It’s amazing what you’ll do when you put some of that Pedigree dog food on it.” – Pedigree pro Greg Pugh, on using his sponsor’s product for bait. Pugh sits in the No. 3 spot heading into day two.

“I wish I was in the tent all day instead of out there.” – FLW Tour pro Bernie Schultz, after a hard day of fishing on the Big O. Schultz finished in 162nd place on day one.

“They look like baseball pickles.” – FLW Tour pro Scott Suggs, comparing the size of his fish to a popular ballpark snack.

“You need to feed those fish some chicken wings.” – Weighmaster Charlie Evans to Tyson pro Alfred Williams, after Williams weighed in a five-bass limit weighing a scant 5 1/2 pounds.