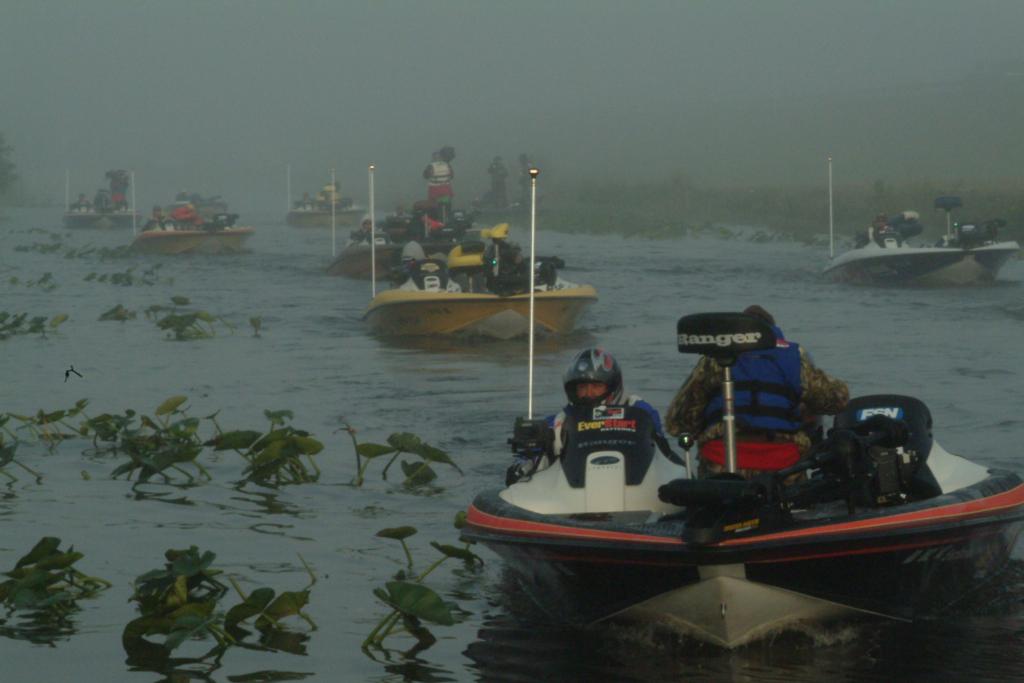 CLEWISTON, Fla. – Entering the final day of competition on Lake Okeechobee, the top 10 FLW pros found themselves once again battling the great white monster – fog. Although takeoff eventually resumed at approximately 8:30 a.m. EST after a 90-minute delay, anglers playing catch-up were put at a distinct disadvantage as the majority of the lunkers have been biting early in the morning.

Waiting for the fog to lift left little else to do at the dock than sort through tackle and shoot the breeze. Most of the dock talk surrounded around who would be the guy to catch the big one today. After all, this week on Lake Okeechobee, it seems it’s not about patterns or perfect spots but rather who is going to get lucky enough to snag the 7- or 8-pound bass that are definitely lurking.

“It’s kind of like playing the lottery,” said Yamaha pro Terry Bolton of Paducah, Ky., who currently sits in the No. 3 spot. “You can go from an 8-pound stringer to a 14-, 15-, 16-pound stringer with one cast. The key to it is when you find an area with big bass – that’s the kicker. Those big fish are there for a reason.”

“Obviously getting the big bite is really crucial,” he said. “You need that to separate yourself from everybody else.”

Indeed, the Okeechobee crowds have seen some mighty big bass cross the scales this week, including an 11-plus-pounder caught by Castrol pro Bobby Curtis on day two that entered the FLW Tour record books as its second-heaviest bass.

Yesterday, Pedigree pro Steve Kennedy parlayed his one good bite – a 6-plus-pounder – into a 7-ounce lead over Rojas. From his perch at the top of the leaderboard, Kennedy is definitely the man to beat. But, as Bolton said, the winning bass is usually only one cast away at Lake Okeechobee.

Anglers will combine today’s catch with yesterday’s weight in an attempt to produce the heaviest two-day stringer. Whoever comes out on top will be declared champion.

The $100,000 winner will be crowed this afternoon at the final weigh-in, which will take place at 3 p.m. at the Clewiston Wal-Mart store, located at 1005 W. Sugarland Highway.

Wind: from the southwest at 10 mph