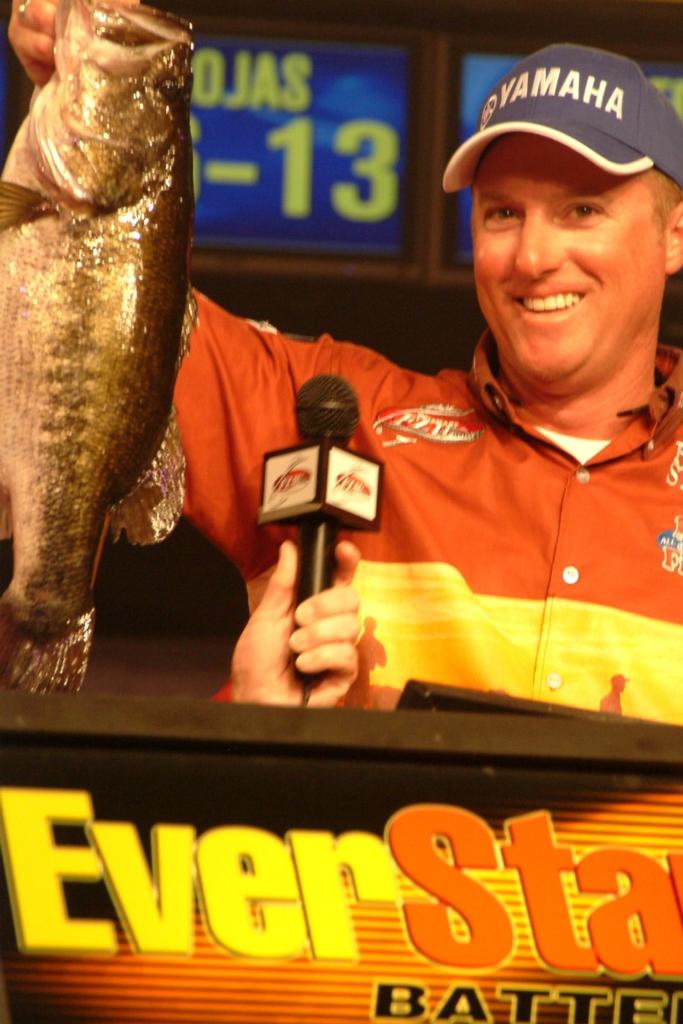 Thirty minutes of brilliance … Wal-Mart FLW Tour Lake Okeechobee winner Kelly Jordon caught four bass Saturday that weighed 23 pounds, an average of more than 5 pounds per bass. Included in the sack was a 6-plus-pounder and a crowd-pleasing 8-pound, 2-ounce monster that earned him the win. Amazingly enough, Jordon caught every one of his four hefty bass in a 30-minute time period this morning. … “It was the most amazing 30 minutes of my life,” he said. “It was one of those deals where everything just lined up.” … Jordon took the lead after weighing in just two bass. Later, Steve Kennedy briefly reclaimed the lead, setting a scene for an intense shoot-out to close the show. Jordon went on to defeat Kennedy by 4 pounds, 4 ounces.

40th time’s a charm … Jordon claimed his first career FLW Tour victory during his 40th FLW Tour event. This week also marked the first time Jordon has finished in an FLW Tour top 10. Jordon typically fishes five out of the six regular-season FLW Tour events and says Okeechobee is his second-favorite lake in the nation, behind Texas’ Lake Fork. His average FLW Tour finish on Okeechobee is 47th.

Hurts so good … Although Dean Rojas snagged third place and $25,000 with a two-day catch of 19 pounds, 8 ounces, the Skeeter/Yamaha pro was far from satisfied. After losing the 2002 Forrest Wood Open on Lake Champlain by only 2 ounces, Rojas has been seeking revenge ever since. He came close again this week but fell short after a two-bass catch on the final day. However, Rojas is well-known for his world-record-breaking 45-pound, 2-ounce five-bass catch on Lake Toho in 2001. Toho is the FLW Tour’s next stop, and Rojas is already gearing up, issuing a warning to his fellow competitors about those big Toho bass: “They’re going to have to come through me to get those fish.”

New kid on the block … Also looking forward to Toho is Lakeland, Fla., resident Bobby Lane, an FLW Tour rookie who made a name for himself this week with his seventh-place performance on Lake Okeechobee. Lane is an EverStart Series and Wal-Mart Bass Fishing League veteran who has cleaned up on Florida lakes, amassing eight top-10 finishes in the Sunshine State alone, including a second-place effort on Toho in 2002 in a BFL event. … So far, Lane is certainly enjoying his first foray into the big leagues. “I’ve never been in a helicopter, but I looked up today and there’s a helicopter 20 feet above me,” he said, referring to the Fox Sports Net camera copter. “The FLW Tour is amazing. I never thought that just by catching a few fish I’d be up here in front of thousands of people.”

A new look at an old game … This week’s event on Lake Okeechobee marked the debut of Fox Sports Net’s coverage of the FLW Tour, and the innovations just keep on coming. Garnering the most attention is the new “hat cam,” a tiny 2-gram camera that gives viewers a fisherman’s view of the tournament-fishing experience. The hat cam is practically weightless on the pros’ heads but does require them to wear a belt-type apparatus of equipment around their waist. … Viewers can also expect to see some underwater shots on Fox Sports Net’s FLW show. The crew has a camera rigged on a 20-foot crane that can descend underneath the water as well as above the anglers’ heads.

4-4: Jordon’s margin of victory, in pounds and ounces, over Pedigree pro Steve Kennedy.

64,000: Dollar difference between the first- and second-place cash awards.

11: Weight, in pounds, of Bobby Curtis‘ bass, caught on day two, that earned him the tournament’s $1,000 Snickers Big Bass Award.

8-2: Weight, in pounds and ounces, of Kelly Jordon’s big bass on the final day.

72-8: Total weight, in pounds and ounces, of fish caught by the pros Saturday.

3: Total number of five-bass limits caught by the pros Saturday.

“It was foggy this morning. I got lost, and that’s where I wound up.” – BFGoodrich Tires pro Chad Grigsby on the spot where he caught his lone keeper of the day, a 6-pound, 15-ouncer. He wound up in ninth.

“When I got her in the boat, I made more racket … everybody within a mile heard me.” – Big-bass winner Bobby Curtis, on his reaction to catching an 11-pound bass, his personal best.

“I can’t believe Dean’s dry. Kelly’s got me scared. He’s smirking.” – Day-three leader Steve Kennedy, realizing his lead was about to be taken away by eventual winner Kelly Jordon, even though he managed to eclipse day-three runner-up Dean Rojas.