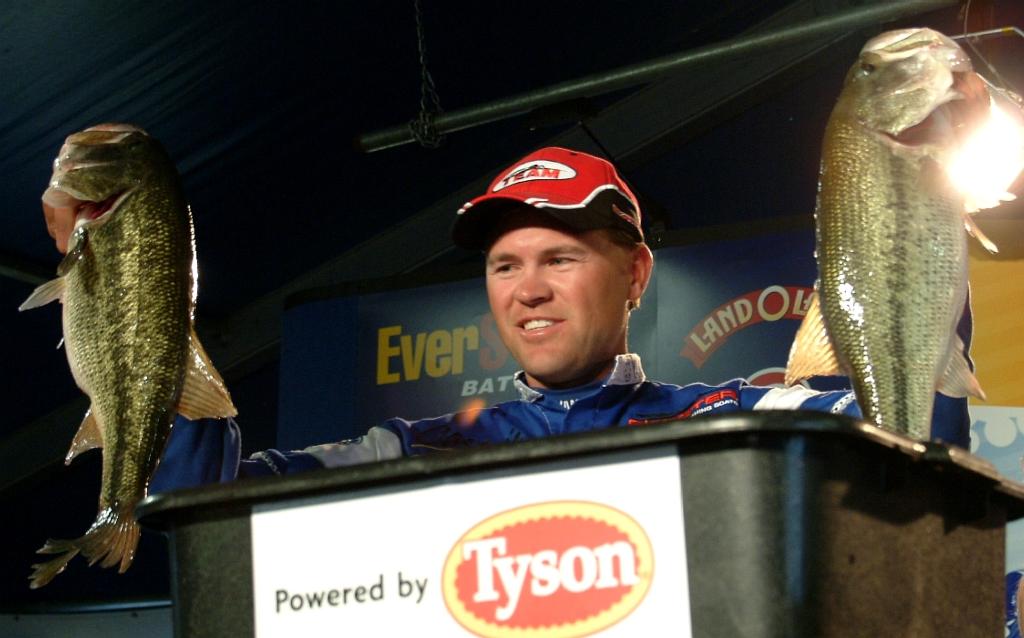 Wal-Mart FLW Tour rookie Clifford Pirch of Payson, Ariz., made a remarkable jump from 105th to first on the leader board Thursday with a 19-pound, 8-ounce limit that pushed his two-day total to nine bass weighing 27 pounds, 9 ounces. He now leads 10 Pro Division finalists into the second half of competition in the $1.25 million Wal-Mart Open. Photo by Jeff Schroeder. Angler: Clifford Pirch.
April 14, 2005 • Jeff Schroeder • Tackle Warehouse Pro Circuit

ROGERS, Ark. – Throwing practically everything but the kitchen sink at Beaver Lake’s bass Thursday, pro Clifford Pirch of Payson, Ariz., came in with a monster, 19-pound, 8-ounce haul and rocketed up the standings by 104 places to lead the opening round of the Wal-Mart Open.

Pirch began the week yesterday with a middling 8-pound, 1-ounce total catch that had him sitting in 105th place coming into today’s second half of the opening round. His 19-8 limit Thursday pushed his two-day total to 27-9, and he edged out Darrel Robertson by almost a pound for bragging rights in the Pro Division’s top spot.

“I had a really good practice, but I kind of choked yesterday,” Pirch said. “Today I was moving around quite a bit. I had to gain a lot of ground, so I fished as hard as I could. I just had to go for broke, I guess.”

Go for broke he did. Pirch said that he fished roughly three distinct patterns Thursday. He started in the morning fishing a shallow shad pattern, then as the clouds cleared he switched to sight-fishing for spawners. After that, he moved out and targeted prespawn, staging fish in deeper water.

All the while, he threw a whole lot of his tackle box at the bass. In the morning he used a Castaic Baby Jerky J soft plastic to catch a few, even breaking off a 4-pounder fishing shad beds. For sight-fishing he said he employed “a couple lizards, creature baits and a Roboworm.” Fishing the deeper rock ledges later, he threw a jig and a drop-shot.

The impressive five-bass limit to which he eventually culled included two kicker bass – one weighing 4 pounds, 12 ounces and another at 4-8.

“I just kind of used normal Western patterns; it’s just kind of what I’m used to doing,” said Pirch, an FLW Tour rookie who last made noise in FLW Outdoors with a top-10 finish in EverStart Western Division competition earlier this year at Lake Havasu. He also top-10ed at last year’s EverStart Championship. “This lake is pretty similar to what we fish out West. Obviously, there’s clear water, shad and crawfish, and that’s pretty much the same as a Western lake. So this is pretty much normal water for me.”

What also helped was the sunshine that burned off the cloud cover later in the morning. While catch weights dropped on day two, the bluebird skies as the day wore on helped out those, like Pirch, who needed to catch a few on bed to stay in contention.

“I haven’t had a really good tournament out (East) yet. I was starting to wonder if I should just stay out West.” Pirch said. “So I’m excited and relieved.”

The changing conditions put a shuffle on the leaderboard, most notably on day-one leader Guido Hibdon, who was unfortunate to post a zero on day two. But several top pros, like Jay, Oklahoma’s Robertson, managed to whack them again despite the sunny skies.

Burning a chartreuse-and-white War Eagle spinnerbait, Robertson caught another decent limit Thursday and finished the opening round with 26 pounds, 10 ounces. His second place Thursday makes the second FLW cut in a row that he’s made.

“I ran my batteries completely down today. I put my trolling motor on high and ran down the bank, throwing my spinnerbait, hoping to catch bed fish,” he said. “I didn’t catch as many fish, just what I needed. They’re hard to find, but it might be easier tomorrow with fewer people looking for them.”

Robertson said to look out for the sight-fishing as the week wears on.

Using a big catch early, Alton Jones of Waco, Texas, climbed from 27th to third place in the Pro Division with an opening-round weight of 25 pounds, 10 ounces.

“I caught that 4-12 (largemouth) on the first cast today,” said Jones, who added that he wasn’t sight-fishing but caught his fish on Yum soft plastics. “I did something different to catch it, and it really set the pace for the rest of the day.”

Pro Jeremiah Kindy of Benton, Ark., also conquered the shifting conditions to catch another contending limit and make his second FLW finals in a row. His limit Thursday weighed 10 pounds, 1 ounces, and he totaled 25-3 for the opening round, good for the fourth qualifying spot.

“I never caught a fish where I caught them yesterday,” he said. “It’s not the area you’re fishing. It’s pattern-fishing.”

Kindy went back to the crankbait well, using an original Wiggle Wart, and caught three of his keepers off rock ledges. He also caught a number of fish on a finesse worm.

“Today I had to fish bigger rocks, bigger `ledge-type’ rocks, I call them,” he said, adding that wind is key to his pattern. “I’m running and gunning a bunch. I burned a whole tank of gas today.”

2002 Wal-Mart Open champion Andre Moore of Scottsdale, Ariz., positioned himself for another shot at the title by qualifying for this week’s finals in fifth place. He caught 25 pounds, 1 ounce in the opening round.

“I had a great day,” said Moore, who took advantage of the sunshine and went sight-fishing, catching the bulk of his fish on a Reaction Innovations Smallie Beaver. “I had a lot of fun. There’s a lot of fish moving up. I can see an extra 4 or 5 feet deeper with that sun, so it opens up a lot more options.”

Rounding out the top 10 pros on day two at Beaver Lake:

The limit count was down Thursday, compared to Wednesday. The pros weighed in 110 limits.

Kilpatrick earned the day’s Snickers Big Bass award of $750 in the Pro Division with a 4-pound, 14-ounce largemouth. In seventh place, he also made his second consecutive FLW top 10.

Shaw is also a repeat finalist from the Ouachita River tournament last month.

Turner turns it on for co-anglers

Fishing with pro Art Berry, Jeff Turner of Plainfield, Ill., caught the heaviest limit in the Co-angler Division – 11 pounds, 2 ounces – and vaulted into first place with a two-day total of 17-11.

“I was just throwing watermelon and green-pumpkin finesse worms,” Turner said. “I caught three good smallies early when it was a little foggy. I only caught six keepers, but five of the six were over 15 inches.”

Second place on the co-angler side went to Jeff Baffa of Tinley Park, Ill., for an opening-round weight of 16 pounds, 13 ounces.

Frank Meyer of Marianna, Fla., placed fourth with 15 pounds, 9 ounces, and Derek Jones of Chicago qualified in fifth with 15-6.

Rounding out the top 10 co-anglers on day two at Beaver Lake:

Co-anglers Matt Scheipeter of St. Louis, Mo., and Ernie Hillebrandt of Sam Rayburn, Texas, tied for the Snickers Big Bass award and each earned $250 with a 4-pound, 5-ounce bass.

Day three of Wal-Mart Open competition at Beaver Lake begins as the 10 pros and 10 co-anglers take off from Prairie Creek Marina at 7 a.m. Central time Friday for the second half of competition. The co-anglers will wrap up competition Friday while the pros are fishing the first half of a two-day final round.