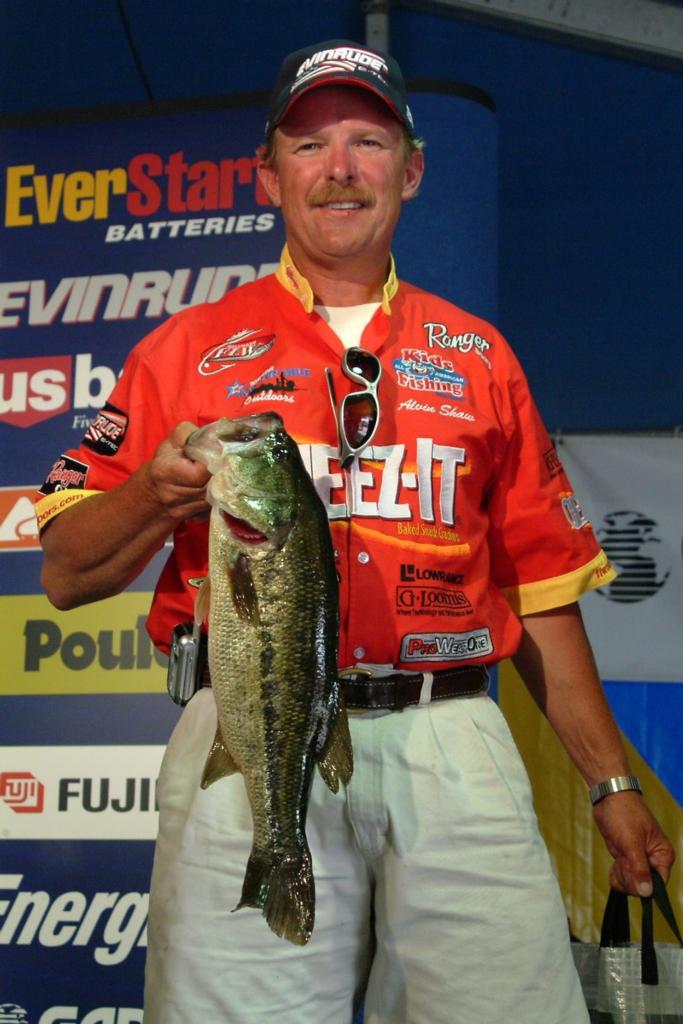 Shawshank redemption … There’s been a lot of talk this season about Bobby Lane’s three straight top-10s, but there’s a veteran angler lurking around Wheeler this week who’s gunning for his third straight top-10 of the season – Alvin Shaw. The wily pro finished sixth on the Ouachita River in March and seventh last month on Beaver Lake, and he’s currently 10th on Wheeler with a day-one limit weighing 17 pounds, 8 ounces. … King of the understatement, Shaw said on stage today, “It’s been going good these last couple of tournaments.”

Hicks the stick … Co-angler Mark Hicks, an outdoor writer who frequently contributes to FLW Outdoors Magazine, took everyone by surprise today when he brought in a 20-pound, 6-ounce limit to lead the co-angler field – by a lot – in his first-ever FLW Tour event. The stringer would have put him in fifth place on the pro side and gave him a 5-pound, 10-ounce lead over second-place co-angler Greg Fleming. He also smoked his pro partner Sam Newby, who still brought in a very respectable 16 pounds, 4 ounces to sit in 19th place in the Pro Division.

Great Scott! … It’s been a good year for rookies this season on the FLW Tour, and Arkansas pro Scott Suggs joined the list of successful first-timers today when he brought in 24 pounds, 7 ounces of Guntersville bass to lead the Pro Division. Suggs’ only two top-10 finishes in FLW Outdoors tournaments have come in BFL events on Lake Ouachita in his home state of Arkansas, but he’s apparently quite comfortable with north Alabama fishing as well, bringing in not one, but two bass today that totaled over 7 pounds. … Suggs stumbled at his first two FLW Tour events but has steadily climbed the ladder since then, notching a 32nd-place finish on the Ouachita River and claiming 24th on Beaver Lake.

Wheeler vs. Guntersville … The clear winner of today’s “where should I go?” battle was Guntersville, as most anglers took the gamble and made the long run through the locks. In fact, all of the Pro Division top 10 except Jonathan Newton, a local with plenty of Wheeler Lake knowledge, took the Guntersville risk, and it obviously paid off. For others, the ride to Guntersville was described as “a total waste of time,” with several making the long run only to turn around and come back to Wheeler for their fish. Pros Glenn Browne and Art Berry are among the pros regretting the long run, as Browne eventually caught all four of his bass close. “That may not have been my best decision,” Berry said of the lock-through to Guntersville. Berry currently sits in 108th place, with Browne in 65th.

Unpredictable … Any tournament on the Tennessee River chain in north Alabama gets tongues wagging about a few big-name pros almost certain to do well when it comes to Wheeler or Guntersville bass fishing. So how’d they do? Many predicted Matt Herren would bring in a fat sack, but he managed only four weighing 14-11, a tally still good enough for 33rd place. Aaron Martens, a former Wheeler Lake champion, caught a respectable 15 pounds, 1 ounce but has a bit of a hill to climb from 29th place. Guntersville connoisseur Andy Morgan also surprised a few when he brought in only four bass that weighed 11-1, good for only 78th place. Jonathan Newton, however, currently sits in the No. 7 spot with 18 pounds, 9 ounces of Wheeler Lake bass, and Kelly Jordon, another Guntersville expert, held the lead for a while before settling into third with 22 pounds, 15 ounces.

Keeping up with the Joneses … Co-angler Tee Watkins held a scant three-point lead over Derek Jones in the Co-angler of the Year race that he can probably kiss goodbye now that Jones is currently in fourth with a four-bass catch weighing 11 pounds, 12 ounces. Watkins landed in 78th with one bass for 3-8.

0: Number of times pro leader Scott Suggs had fished any of the lakes in the Tennessee River chain in FLW Outdoors events before this week.

6: Number of consecutive seasons Larry Nixon has earned a top-10 finish. He hasn’t yet earned one in 2005, but is currently in second place on the pro side.

8-10: Weight, in pounds and ounces, of Ray Scheide’s huge Guntersville lunker that earned him $750 as the Pro Division big-bass winner on day one.

“I could kind of settle down after that.” – No. 4 pro Ray Scheide on how he felt after catching an 8-pound, 10-ounce bass.

“I need to hit more lakes.” – Pro Bernie Schultz, who caught two bass today, each from a different lake.

“I guess I shaved my mojo away.” – Alabama pro Todd Ary, blaming his 172nd-place performance today on the removal of his goatee.

“They like to bite the way I like to fish.” – Larry Nixon on the bass in the Tennessee River chain of lakes.

“I want the bragging rights for Angler of the Year. I don’t care about the other stuff.” – Current points leader J.T. Kenney, who finished 46th after day one on Wheeler Lake. His closest challenger, Matt Herren, is currently in 33rd.

“I’m kind of embarrassed; I caught them on a little finesse bait. At Guntersville, I’m a little ashamed.” – No. 11 pro Chad Grigsby, admitting to using a small bait to catch big Guntersville bass.

“Somebody tell me how to shut him up.” – Pro Steve Kennedy on his most enthusiastic supporter, Louie – his Jack Russell terrier. Louie is famous on the FLW Tour for greeting Kennedy with loud barks when he gets on stage.

Tomorrow’s takeoff is scheduled to take place at 6:30 a.m. CDT at Riverwalk Marina, located on Highway 31 North in Decatur.