Jordon hits two in a row 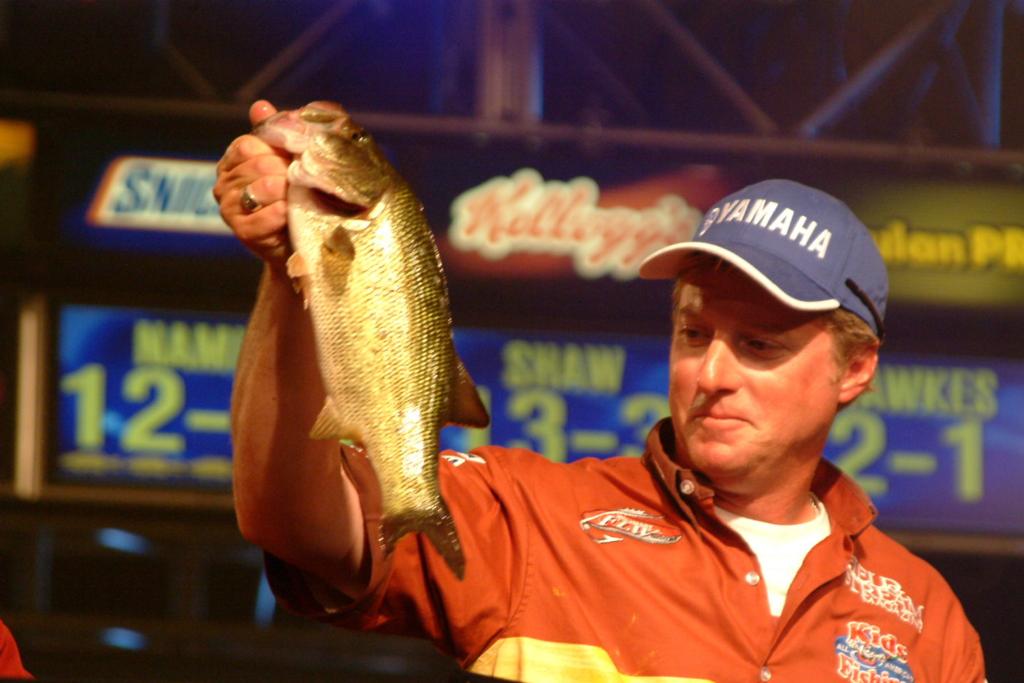 DECATUR, Ala. – The Pro Division leaders broke out the sight-fishing sticks with a vengeance Friday in Alabama, and once again it was Kelly Jordon who saw his way to the top. The pro from Mineola, Texas, boated a five-bass limit weighing 17 pounds, 11 ounces to lead the pros in the first half of the final round of Wal-Mart FLW Tour competition at Wheeler Lake. After also leading the opening round, he maintains the No. 1 spot heading into the final day.

Jordon has changed very little of his fishing approach all week long. With high, sunny skies and calm water again, today he returned to his areas on Guntersville Lake and went sight-fishing.

“I had a great day. This is just a great place to fish,” he said. “The moves I made today were just the right ones. I’m glad to be on a roll now. I just hope I can complete that roll tomorrow.”

Jordon said he fished “just typical big bays” on the main lake at Guntersville and seems to have a wealth of bedding bass to work with.

“I have six or seven bed areas,” he said. “I haven’t even had time to go to all of them. I found five or six more of them again today. Everybody’s liable to catch a big stringer here.”

Jordon’s stringers, of course, have been some of the biggest all week so far. He stayed with his two main baits, a Lake Fork Baby Creature and Baby Fork Craw, to catch four of his keepers Friday. He also hooked one on a Senko. In all, he said he caught about eight or nine keepers, eventually culling out to a stringer of bass that each weighed between 3 and 4 pounds.

His biggest fish, a 4-pounder, didn’t come straight off a bass bed but from a shallow bream bed where it was feeding.

“He was in so shallow, he couldn’t even jump when I hooked him,” Jordon said. “If you’re around bream beds, you can see then feeding on bream. If you can see them before they see you, you can catch them.”

Jordon wasn’t alone in the Guntersville sight-fishing movement Friday. All of the top pros said they locked upriver and used their eyes as their primary weapons.

Second place went to Michael Bennett of Roseville, Calif., who turned on his bass-bed radar yesterday and used those spots today to catch a 15-pound, 3-ounce limit.

“I found those fish yesterday. I was looking for new ones as quickly as I could find them,” he said. “It seems that, if you find one, there’s two more just like it in a similar spot.”

Bennett, who turned 21 years old just last Saturday, fished the Browns Creek Area of Guntersville. He didn’t catch anything in the first hour of fishing, but things came together for him after that. In all, he was able to pluck seven keepers off the bed on what he said were a variety of baits.

“It depends on the mood of the fish,” Bennett said about the lures he used.

Grigsby, Shaw, Namiki, Hackney all within a pound

Behind Bennett, places three through six are knotted up within a pound of each other. Not surprisingly, all of them fished in Guntersville.

Fishing near Bennett in Browns Creek, Chad Grigsby of Colon, Mich., also sight-fished his way up the leaderboard Friday. He caught a limit weighing 13 pounds, 13 ounces and placed third.

“I found one big one, but I lost her,” Grigsby said, adding that he mostly threw a weightless Venom Sling worm. “I caught six all day, and three of them I caught on the outside edge of the grass while I was looking for beds.”

“At this lake, you’re never out of it,” said Shaw, who went sight-fishing Friday. “With the fish they have here, 2 pounds isn’t tough to make up.”

Just behind Shaw is Toshinari Namiki of Tokyo, Japan, who showed that he was on some big bass by weighing in just three fish that totaled 12 pounds, 14 ounces. He placed fifth.

“Yeah, I needed two more,” Namiki said. “I didn’t lose any fish, but my co-angler (Mark Hicks) had a good day. (He won the Co-angler Division.) But that’s okay. I’m glad he won, but tomorrow I’ll have a big day.”

Rounding out the group of anglers who, besides Bennett, have the best chance to challenge Jordon Saturday is Greg Hackney of Gonzales, La., who caught four bass weighing 12 pounds, 13 ounces. He placed sixth.

Rounding out the top 10 pros heading into Saturday’s action at Wheeler Lake:

Day four of Wal-Mart FLW Tour competition at Wheeler Lake begins as the final-round field of 10 boats takes off from Riverwalk Marina at 6:30 a.m. Central time Saturday. Friday’s weights carry over to Saturday, and the $100,000 Pro Division winner will be determined by two-day combined weight.