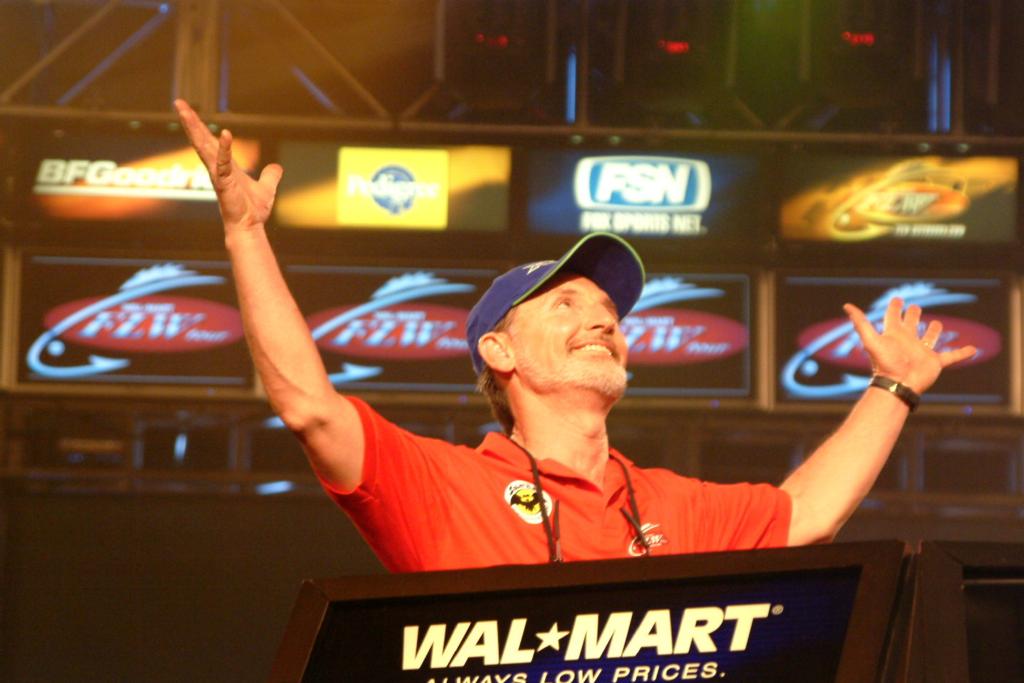 Captain hook … When a hook sliced through Mark Hicks’ hand before takeoff this morning, he instantly knew the tournament was his. The karma of the hook proved sweet, giving Hicks a $20,000 co-angler victory in his first-ever FLW Tour event. “It’s dark when you get there, and when I got the rods out of the van, I got a rod stuck on the running board,” Hicks said. “I went to lift it up and accidentally grabbed the hook. Honest to God, when I did that I thought I was going to have a good day.” Luckily for Hicks, the hook doesn’t have to stay in place in order for its good luck to take effect. “Darrel Stevens wrapped 3-pound line around it and snapped it right out,” he said. “It was great.”

State of grace … Mark Hicks began the fishing day with a hook in his hand, and he ended it flat on his back after taking a tumble out of the boat when trying to get out. “I put my foot out the side, and I thought I had it on something secure,” he said. Apparently not – Hicks fell 4 feet to the ground and landed on his back. “I was stunned,” he said. “I didn’t know if I was hurt or not. I’m going to have a sore rear end.” However, the best medicine for a sore rear end is a wallet full of money in your back pocket, which Hicks now has thanks to his lucrative co-angler victory.

Where’s the cake? … Pro Mike Hawkes may currently be 10th out of the final 10 pros, but he still has something to celebrate – today is his birthday. He claims he’s 29, and since it’s his birthday, we’ll let him get away with that tall tale. His only request was for television host Charlie Evans and FLW Tour tournament director Bill Taylor to sing him happy birthday, and Evans obliged, with the whole weigh-in crowd joining in. … Also enjoying a recent birthday is No. 2 pro Michael Bennett, who just four days ago turned 21 – and that’s the truth.

The Hack is back … Last season, Greg Hackney ranked No. 2 in Angler of the Year points standings on both the FLW Tour and Bassmaster trails and racked up two top-10 finishes on the FLW Tour. After a bit of a slow start in 2005, the Hack Attack is back with his first top-10 of the season, but just because he hasn’t been here yet doesn’t mean he’s been slacking off. In fact, Hackney has quietly accumulated enough points to rank eighth in the standings heading into this week’s event, and he will have certainly climbed few notches following his performance this week. “I kind of got off to a slow start, but I’m fishing really good right now, and I’m enjoying it,” Hackney said. “That’s the way it goes sometimes.”

Jonesing for a title … Although Tee Watkins leapt 68 spots up the leaderboard on day two to enter the co-angler final round – thus giving himself a chance to hang on to his points lead – he was still no match for Derek Jones, who out-fished Watkins on day three to lay claim to the No. 1 spot. Jones finished the tournament in second place while Watkins finished 10th, and they are separated by a mere five points. Jason Knapp checks into third place, 63 points behind Jones, with Stetson Blaylock and Bob Bjorklund rounding out the top five Co-angler of the Year contenders.

1: Number of FLW Tour events that co-angler winner Mark Hicks has ever fished.

4: Number of bass – out of a five-bass limit – that Mark Hicks brought to the scales on the final co-angler day. The four bass weighed more than 15 pounds combined.

5: Weight, in pounds, of Mark Hicks’ margin of victory over runner-up Derek Jones.

2-8: Weight, in pounds and ounces, of No. 1 pro Kelly Jordon’s lead over Michael Bennett.

2: Number of top-10s Kelly Jordon has scored this year – so far.

“They all had eyeball disease. Their eyes were too close to their tail.” – No. 10 co-angler Tee Watkins, lamenting the abundance of short fish he caught this week.

“The neat thing about being an amateur is you don’t have to do any work. You just show up.” – Co-angler winner Mark Hicks.

“I’m excited; I’m just, you know, whatever.” – The calm, cool and collected Michael Bennett, who’s experiencing his first FLW Tour top-10 with nary a sign of the jitters.

“I’m fishing out of the chip boat.” – Aptly named pro Chip Harrison, who’s fishing the final round out of the Lay’s chips-wrapped boat.

“He can’t speak east Texas, can he?” – Lendell Martin Jr., after weighmaster Charlie Evans had a difficult time pronouncing the name of Martin’s Texas home of Nacogdoches.

“It was kind of like a slap in the face.” – Alvin Shaw, describing the sting of his performances at the first two events of the season, where he finished deep in the 100s.

“When you catch a big stringer, you kind of fool yourself into thinking it was easy. It wasn’t that easy.” – Pro Mike Hawkes, who caught a big stringer on day two but couldn’t reproduce it on day three.

“I told you I was taking you to Vegas.” – Chad Grigsby to TV co-host Keith Lebowitz when asked what he would do with the $100,000 top prize.

“This is the year of Kelly Jordon.” – Charlie Evans, commenting on Jordon’s success on the FLW Tour in 2005.

Tomorrow’s takeoff is scheduled to take place at 7 a.m. CST at Riverwalk Marina, located on Highway 31 N. in Decatur.