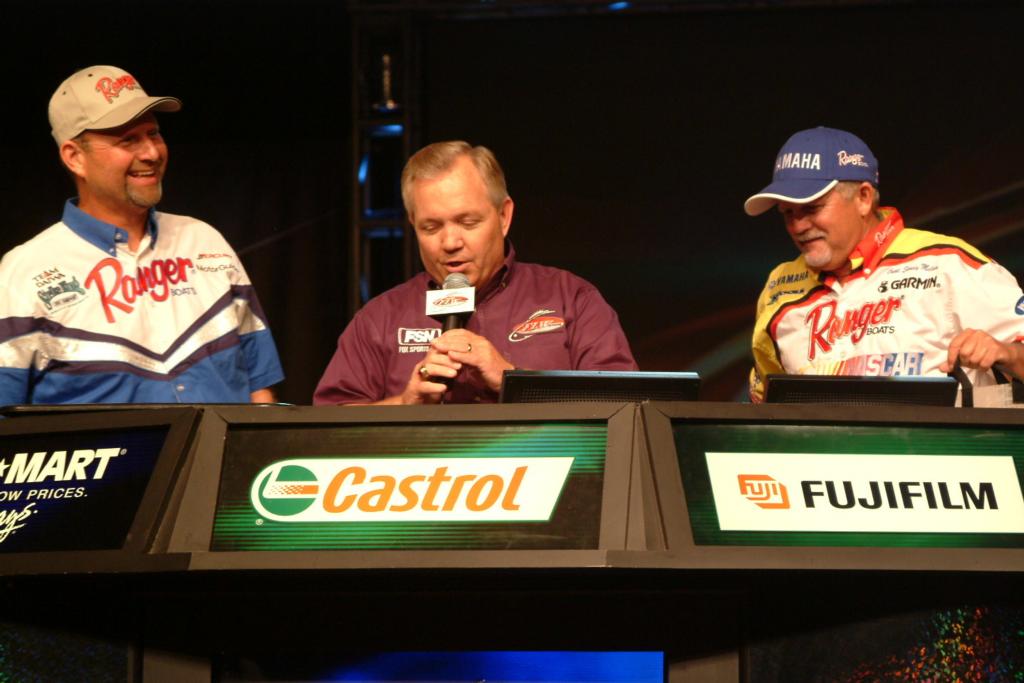 Marginal margins … The bracket-style format of the Wal-Mart FLW Tour’s Forrest L. Wood Championship is sure to create some drama, and today’s weigh-in was never short of it, thanks in large part to some pretty tight bracket pairings. The closest margin after day one was the razor-thin 1 ounce separating No. 16 seed George Cochran and No. 33 seed Sandy Melvin. Cochran, a Hot Springs resident who was thus considered a tournament favorite, managed only 3 pounds, 7 ounces on day one, but Melvin didn’t fare any better, clocking in at 3-6. “That’s close, isn’t it?” Cochran deadpanned after seeing the official tally. Cochran and Melvin were also the last pair of anglers to weigh in, prompting Cochran to say, “I feel like since I weighed in last, you made me suffer since I didn’t catch them today.” Melvin admits he left the door open, but confessed to taking a gamble after sizing up his local competition. “I assumed George was going to catch them, so I went for the bigger fish,” Melvin said. “I won’t get much sleep.” … Other potential insomniacs include Mike Hawkes and Mark Rose, separated by 9 ounces; Dwayne Horton and Zell Rowland, separated by 4 ounces; local pro Jeremiah Kindy and Chad Grigsby, separated by 10 ounces; and Art Berry and Wesley Strader, separated by 13 ounces.

Sitting pretty … At the opposite end of the spectrum, some anglers can relax a bit on day two after creating sizable chasms between themselves and their bracket-mates. The biggest advantage fell into the hands of No. 44 seed Tracy Adams, who caught the day’s second-heaviest stringer to lead No. 5 seed Dave Lefebre by a whopping 8 pounds, 4 ounces. “I was telling people I was really going to sack them up this tournament,” Lefebre said. “I’m so embarrassed.” … Other competitors with a solid advantage include Dean Rojas, who leads Todd Faircloth by 5 pounds, 3 ounces, and Brent Chapman, who caught 7 pounds to end day one ahead of bracket-mate Randy Blaukat by 5 pounds, 4 ounces.

Here we go again … You know it’s going to happen – every year, there is at least one bracket where both guys are on good fish, and only one of them can advance, while someone in another bracket with far less weight remains in contention for the $500,000 top prize. This year there are two (so far), and they are separated by the exact same margin – 4 pounds, 15 ounces. Arizona pro John Murray brought in 12 pounds, 10 ounces to lead Ken Wick’s 7-pound, 11-ounce catch – a good one on stingy Lake Hamilton. “He tore them up,” Wick said. “I knew he would.” … The day’s heaviest stringer belonged to Alabama pro Matt Herren, who weighed in 12 pounds, 15 ounces to lead the 8 pounds brought in by Tom Monsoor. Wick’s weight would have led 16 other brackets, while Monsoor would have led 17 and tied an 18th. “I was standing in line, and I heard somebody had a 5 and a 4,” Monsoor said. “I looked at Matt, and he smiled, and I knew it was him.” … Meanwhile, in another bracket, Dwayne Horton caught only 1 pound, 12 ounces today, but leads Zell Rowland by 4 ounces, and one of them will move on to the next round.

Tough as nails … At least they knew it coming in … the fishing on Lake Hamilton today was tough, to put it politely. All the pros did manage to weigh in at least one bass, however, while 10 co-anglers blanked. In fact, the current cutoff weight on the co-angler side (the top 24 advance to the final round) is only 1 pound, 15 ounces. Though three pros busted a 12-pound-plus sack today, the vast majority caught 5- to 7-pound stringers. Said pro Chip Harrison, who leads his bracket by almost a pound and a half, “I got a pound average. That’s pretty good on this lake right now.”

Arkansas Razor-slacks … With the fishing so tough on Lake Hamilton, many expected stiff local competition this week from Arkansas natives such as Rob Kilby, Scott Suggs, Jeremiah Kindy and George Cochran. However, out of the four, only one is leading his bracket, and that’s Cochran with his 1-ounce lead and only 3 pounds, 7 ounces today. Local legend Larry Nixon, though, did his state proud, leading his bracket by almost 3 and a half pounds and bringing in 9 pounds today, but he’s not holding his breath. “On this lake, I don’t feel good about anything,” Nixon said. As for Suggs, he admits he fell short of expectations on day one, but he’s only 1 pound, 8 ounces behind Todd Ary. “I had high expectations coming into this tournament, and I don’t know what I could’ve done differently,” he said.

12: Number of bracket matchups led by the higher seed.

12: Number of bracket matchups led by the lower seed.

50: Percent of pros who brought in a five-bass limit on day one.

1-6: Weight, in pounds and ounces, of the lowest catch brought in by a pro. The one-bass catch was weighed in by Todd Faircloth.

13: Weight, in ounces, of the lowest catch brought in by a co-angler, excluding the zeroes. Alabama angler T.R. Fuller took the honors.

“Somebody’s got to beat him. Might as well be me.” – No. 48 seed Sam Newby, dismissing the potential perils of fishing against No. 1 seed Greg Hackney.

“I don’t know anybody out there who doesn’t need half a million.” – Angler of the Year Greg Hackney on the championship’s lucrative top prize.

“An old, wore-out pro, I guess.” – Veteran Larry Nixon, on how he would describe himself in comparison to his bracket-mate, young rookie Bobby Lane.

“I’ve done it two years in a row – made the championship at the last tournament. It’s getting old. I’m 30 years old, and I’m getting gray hair because of it.” – Pro Todd Ary, who squeaked into the championship in the No. 37 spot.

“A shoot-out seems to follow me, but I’m up for the challenge.” – Overall weight leader Matt Herren, who’s no stranger to FLW Tour shoot-out-style competition.

“Today is my birthday. You’re supposed to give me a bit of an advantage. Keep that in mind tomorrow.” – Alton Jones to his bracket-mate Alvin Shaw, who leads him by a little more than a pound.

“They have masseuses out there, for crying out loud, but I didn’t get a massage. I had to go to the bathroom.” – Dave Lefebre, on missing out on one of the amenities offered to Yamaha pros at the outboard manufacturer’s Angler Appreciation Station.

“These 48 pros and co-anglers you see coming up on stage are the luckiest people on the planet. Not the United States – the planet.” – Former co-angler champion Ken Keirsey on the chance to compete in the Forrest L. Wood Championship.