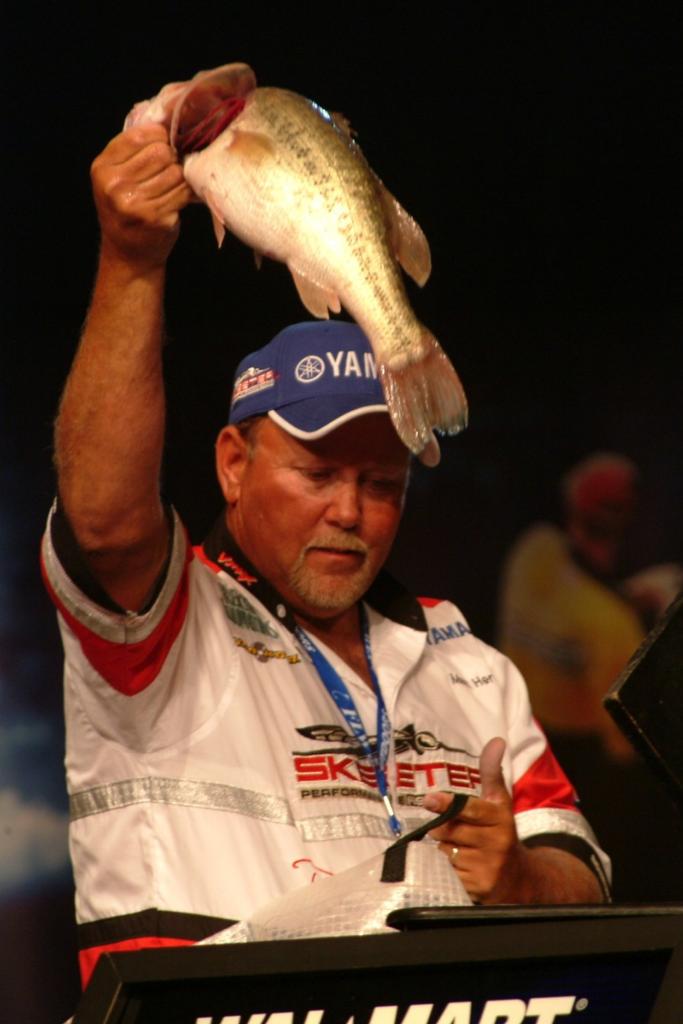 Matt Herren wowed the crowd on day one with a 12-pound, 15-ounce limit that was the heaviest stringer of the day. Photo by Jennifer Simmons. Angler: Matt Herren.
July 13, 2005 • Jeff Schroeder • Tackle Warehouse Pro Circuit

HOT SPRINGS, Ark. – Exactly half of the Pro Division field caught five-bass limits on opening day of the 2005 Forrest L. Wood Championship, but it was easy to tell that they weren’t exactly the kinds of limits for which most of the anglers were hoping.

After that, however, things were downright stingy. Even though 24 of them caught limits, nobody else in the 48-angler field broke double digits in weight on day one.

Tom Monsoor of La Crosse, Wis., impressed the Hot Springs crowd by posting the seventh-heaviest limit of bass today – 8 pounds even – but he has the misfortune of being paired against Herren’s 12-15 in the opening-round brackets and now sits 4-15 behind the day’s weight leader.

“That’s the downside to the bracket format,” said Herren, who was seeded fourth coming into the championship. “I had a really good day, but I hate to get into the bracket again that’s having a shootout. It seems to follow me.”

Two years ago at the FLW Championship on the James River, Herren got locked up in a heavyweight bracket battle with Shad Schenck. Even though he caught the ninth-heaviest weight in the opening round, Herren was edged out by Schenck and didn’t advance.

“You hope to learn from it,” Herren said. “At that one, I didn’t execute as well as I should have on the second day. I just hope I can go out and do what needs to be done tomorrow. I have to because Tom caught 8 pounds.”

Like much of the field, Herren caught the bulk of his bass Wednesday, which included two kickers in the 4- to 5-pound range, fishing brush piles. He said that his best fish bit between 10 a.m. and 2 p.m.

“I don’t really think there’s any secret to fishing brush piles,” he said. “You’ve just got to be the right guy in the right place, throwing the right bait in there when they’re hungry. It will be interesting tomorrow. I’ve got some more (fishing areas) that I didn’t go to today.”

Adams, seeded 44th for the championship, did some damage in his bracket Wednesday. His 12 pounds, 12 ounces topped fifth seed Dave Lefebre of Erie, Pa. – who caught four bass weighing 4-8 – by more than 8 pounds.

“This is the best day I’ve had so far, no doubt about it,” Adams said. “And I didn’t know it would be, either.”

Adams caught eight keepers on a shallow pattern and said he didn’t run around a lot like some pros did.

“All of my fish were mostly the same size. It was just about just getting on a stretch and working it,” he said. “I’m happy with it, but Dave Lefebre is one of the best fishermen out there. You just never know with a guy like Dave.”

In another bracket shaping up to be a heavyweight showdown – as well as a Western shootout – is 31st seed Murray versus 18th seed Ken Wick of Star, Idaho. Murray’s 12 pounds, 10 ounces leads Wick by almost 5 pounds, but with a limit weighing 7-11 – the 10th best catch of the day – Wick has shown that he’s also on some decent fish of his own.

Murray landed nine keepers, including two kicker fish in the 3 1/2- to 4-pound range. He said that he caught a few fish flipping docks as well as on a topwater bait, but it was his Western strategy later in the day that really paid off.

“The biggest thing for me was the drop-shot in deep water, which I don’t think a lot of guys are doing,” he said. “All I do all summer long is throw that drop-shot, so this suits me. Any time you have a good stringer, you feel good about it, especially at the championship. It was one of those glory days where I couldn’t do anything wrong. I wish it had happened on the last day, but I’ll take it today.”

With a high, hot sun – temperatures reached well over 90 degrees – and calm, clear water, most of the anglers came in off of Hamilton with tales of woe. The bass catches were few and far between, and those they caught were relatively small.

That’s why 14th seed Cody Bird of Granbury, Texas, thought he had a decent day when he weighed in a limit worth 5 pounds, 1 ounce.

“I thought I was doing good. I actually culled one today,” he said. “The best day I had in practice I only caught 9 pounds, so I don’t know what I’m going to do to catch the bigger ones.”

He’ll need to figure it out fast because his bracket opponent, 35th seed Danny Correia of Marlborough, Mass., caught a limit of his own that weighed 9 pounds, 1 ounce.

“I’m not on all that much, but I’m on some good fish,” said Correia, who caught three keepers off his co-angler partner’s spot, then moved to one of his own areas and proceeded to fill out his limit. “I’m fishing deep, and I’m really finessing them.”

Bee Branch, Arkansas’ Larry Nixon, the 24th seed, pleased the hometown fans with a limit of his own that weighed 9 pounds even, and he took a decisive lead over 25th seed Bobby Lane of Lakeland, Fla., who caught five bass weighing 5-10.

However, despite his lead, Nixon seemed frustrated by his own efforts on the miserly lake Wednesday.

“Shoot, on this lake, I don’t feel good about anything,” Nixon said. “I caught just the five keepers, and there’s no guarantee that you’re going to catch anything at all. It’s so tough out there. I don’t know what’s going on. I just keep running around, going to places that I haven’t been to yet, hoping that I can catch one.”

“I fished within three miles of the upper dam and two miles of the lower dam,” Morgan said. “I’m just keeping my head down and fishing deep brush piles, rocks and shallow weeds. It’s junk fishing.”

Locals lock up in tight matches

Many predicted the Arkansas locals would have a distinct advantage under the summer conditions here at Lake Hamilton. However, many of them didn’t catch as much as they probably wanted to Wednesday and found themselves thrust into some pretty even matchups heading into day two.

The second half of the opening round in bracket competition begins Thursday as all 48 pros take off from Andrew Hulsey Fish Hatchery ramp on Lake Hamilton at 7 a.m. Central time. Following tomorrow’s fishing, the field will be cut in half. The 24 pros who win their respective head-to-head matchups, based on two-day weight, will advance to Friday’s semifinal round.