Down to 24 at Lake Hamilton 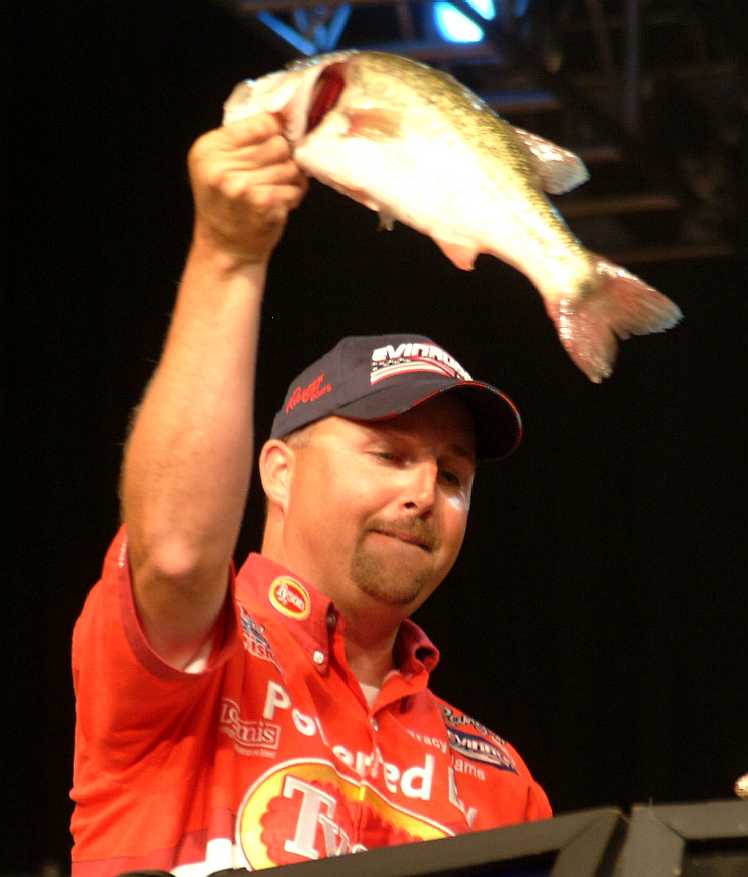 HOT SPRINGS, Ark. – Tracy Adams caught 10 bass weighing 23 pounds, 5 ounces and led all pros in the opening round of the Wal-Mart FLW Tour’s Forrest L. Wood Championship by a decisive margin. However, the happiest pro to come off of Lake Hamilton Thursday was probably Zell Rowland, who caught just five bass weighing a collective 5-9 over the first two days of competition.

The bracket format lived up to its billing Thursday. Where Rowland advanced to the second round, several others with sizable weights came up empty. Bobby Lane caught limits two days in a row and weighed in a total of 15 pounds, 5 ounces, but he was on the receiving end of Larry Nixon’s 17-pound, 8-ounce blow and was eliminated. Alvin Shaw caught 12-6 but lost to Alton Jones’ 13-6.

Perhaps the bitterest pill was swallowed by Todd Ary, however. He caught 13 pounds, 2 ounces but lost by a single ounce to a resurgent Scott Suggs, who rebounded with a better catch Thursday and totaled 13-3. Last year, Ary was eliminated in the first round of the championship brackets by virtue of a tiebreaker, of all things, with Greg Hackney.

Such is the way of things on day two of the FLW Championship.

Adams dominating tough conditions, not sure about tomorrow

The sultry conditions seen Wednesday continued at Lake Hamilton Thursday, but some cloud cover moved into the area early. That seemed to work in favor of the shallow-water fishermen somewhat, which only helped out guys like Adams, who advanced by defeating Dave Lefebre of Erie, Pa., (10 pounds, 1 ounce) in the first round.

“The fishing was good this morning, but after about 11 o’clock, it went downhill,” said Adams, who hails from Wilkesboro, N.C. “So I really don’t know what’s going to happen tomorrow.”

Adams – who beat everybody else’s weight by more than 5 pounds over the first two days – said that he’s fishing shallow, catching bass on a jig. The first day, he landed eight keepers and posted a 12-12 limit, which was hefty for the tough conditions. On day two, he caught six keepers and weighed in a limit worth 10-9, but he also broke off a solid keeper.

“I think I could have caught more yesterday than I did, but today I couldn’t have caught any more,” he said. “I really don’t know what I can do. It seems like you can go back to the ones you missed and catch them, but I don’t have any more that I missed. I definitely wore out the area that I’m fishing.”

Adams will face off against Wesley Strader of Spring City, Tenn., in the second bracket round. Strader notched a solid 15 pounds, 3 ounces and advanced over Art Berry of Hemet, Calif., (10-1) in an entertaining bracket showdown.

“I’m just covering lots of water, trying to make as many casts as I can and catch the biggest fish that I can,” said Strader, who said he mainly caught fish on a topwater bait Thursday. “You never know with this place. Every day it’s an adjustment.”

Arkansas favorite Nixon topped rookie phenom Lane, but in truth they both deserve a shot at the half-million dollars this week.

Nixon of Bee Branch, Ark., had a solid 9 1/2-pound weight on day one, but seemed less than thrilled with the tough fishing. Lane sat over 3 pounds behind Nixon heading into day two, but responded with a 9 1/2-pound limit of his own. Unfortunately for Lane, Nixon also came back with another 8 1/2 pounds, despite the stingy fishery, and grabbed the third-heaviest weight total of the first round.

“I caught my big fish on a buzzbait against a seawall, and that made my day,” said Lane, who hails from Lakeland, Fla. “I was down 3 1/2 pounds to Larry, and I think that fish weighed about 3 1/2 pounds.”

Then Lane addressed the triumphant Nixon directly: “Larry, it was an honor competing against you. You are one of my heroes.”

Nixon will face Land O’Lakes Angler of the Year Hackney, who advanced over Sam Newby, in what will be a marquee bracket matchup Friday. 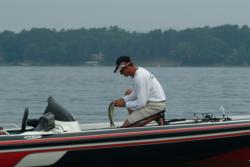 In another tough, heavyweight bracket, Danny Correia of Marlborough, Mass., beat Cody Bird of Granbury, Texas, by amassing 18 pounds, 1 ounce in the opening round. Bird fished valiantly and landed 12-7, but he couldn’t compete with Correia’s weight, which was the second-heaviest of the opening round.

“I’ve been fishing the same group of fish about four or five hours a day,” said Correia, who is fishing deep, from 15 to 25 feet, with light line and a finesse worm. “The quality’s there, and there are plenty of them. When the schooling stops, that’s when I go to catch them. One thing about it, too, is that I’ve got the place to myself.”

Rojas out for redemption

With 15 pounds, 7 ounces, Dean Rojas of Grand Saline, Texas, dominated his bracket over Todd Faircloth of Jasper, Texas, who caught just 3-2. He will face off against Correia in the second round.

The bulk of Rojas’ weight came Thursday with an 8-pound, 14-ounce limit. He caught the fourth-heaviest limit of the day, but said he has some fish saved for the rest of the week, as well.

“I played this game last year (at the championship),” he said. “I caught them really good in the semifinal round, but got beat in the finals.”

The Pro Division has been cut in half to 24 competitors, and weights have been reset to zero. They will each face off in one-day, head-to-head competition within their brackets to determine the top 12 advancing to Saturday’s final round.