Decent limits come through for 12 pros advancing to $500,000 final round 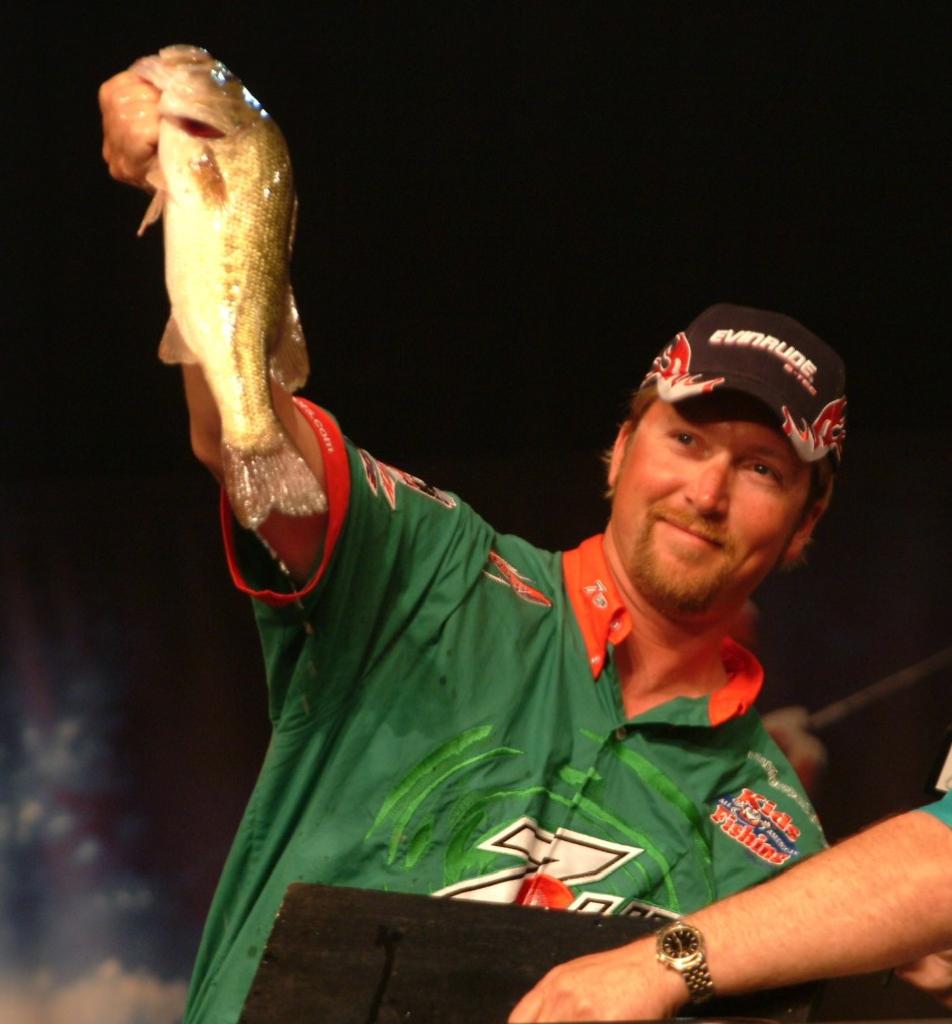 HOT SPRINGS, Ark. – J.T. Kenney and Chad Grigsby are buddies and fishing partners on the Wal-Mart FLW Tour. Throughout the long slog of a demanding tournament season, the two Northern bass pros share information, practice together and generally try to help each other out on the water. That’s why things just got very interesting heading into the 12-angler final round of the Forrest L. Wood Championship. What happens when two friends like Kenney and Grigsby – who both caught leading weights in Friday’s second round – have to fish against each other for a half-million dollars?

Kenney, who hails from Frostburg, Md., caught a five-bass limit weighing 8 pounds, 11 ounces and defeated bracket opponent Mike Hawkes of Sabinal, Texas, to advance into Saturday’s finals. Hawkes caught a limit, but it came up 3 1/2 pounds short at a total of 5-2.

“I started fishing under a bridge early, trying to catch a few keepers and get a limit,” Kenney said. “Then I left and tried for some big fish, and I actually caught two of them today.”

Kenney said he’s been fishing the same way all week long at Lake Hamilton: catching a little limit first, then going hunting for some of those precious 3-pound kickers.

“I’ve been going for schoolers early,” he said. “Once I get five, I’ll leave and just throw a buzzbait all day. Today, I caught five schoolers by 9:30, and the first place I hit with the buzzbait, I caught a couple good ones within two hours.”

While it only counted within his bracket matchup against Hawkes, Kenney’s limit was the heaviest Friday. But he wasn’t the only one capitalizing on the schooling fish/buzzbait pattern.

Grigsby, who landed six keeper fish Friday, also caught a limit of schoolers first, then went kicker-hunting with a buzzbait in shallow water.

“I went to an all-new area today,” Grigsby said. “I had one 2 1/2-pounder, but the difference was that I didn’t have any little 12-inchers. Plus, I had a couple of missed bites in the 2 1/2- to 3-pound range. I’m just covering water, man. I put my trolling motor on 70 and threw the buzzbait most of the day.”

So, is it mere coincidence that he and Kenney once again managed to land themselves in an FLW final round together, more so at the biggest one of the year?

“Nah, we’re just the best fishermen out there. The cream rises to the top,” Grigsby laughed. “You know I’m just kidding. The biggest thing is that we’ve been doing basically the same thing to catch the big ones.”

Sandwiched between Kenney and Grigsby’s weights was the 8-pound, 1-ounce total posted by Dean Rojas of Grand Saline, Texas, which was the second-heaviest catch of the day. He defeated Danny Correia of Marlborough, Mass., who caught four fish weighing 3-11, to advance to the round of 12.

Rojas caught just four bass Friday, but they were quality fish on a lake with a tough bass bite.

“I’m not getting a whole lot of bites, but when I do, it’s a good one,” Rojas said. “I was going for big bites, and it really paid off for me today.”

He said his big-bite strategy relied on his use of a topwater bait that he designed, but which he understandably didn’t want to reveal until after tomorrow. The key for Rojas, who got bumped out of the championship brackets last year despite being on some good fish, was to pace himself.

“The first day, I just kind of went out to catch my limit and go from there. The same thing happened today. I never really beat up my fish,” he said. “The area I’m fishing is where they go to feed. Hopefully, they’ll replenish themselves tomorrow.”

Alton Jones of Waco, Texas, caught the fourth-heaviest total – five bass weighing 7 pounds, 4 ounces – and bumped day-one standout Matt Herren of Trussville, Ala., out of competition. Herren, who caught a single fish weighing 1-3, said that he just ran out of fish.

Jones, however, seems to be gaining strength as the tourney wears on. His limit would have weighed more except that he had a full 1-pound penalty for two dead fish.

“I had a couple casualties today because I was catching them real deep. When you take them out of that cool, deep water and put them in a livewell where the water’s 90 degrees, it’s tough to keep them alive sometimes,” said Jones, who said he used a 7-inch Yum ribbontail worm to catch his keepers. “You just have to stay in water where you have the potential to catch a 3- or 4-pounder and hope to get a limit along the way.”

Omori lined up for another big one

Former Bassmaster Classic champion Takahiro Omori of Emory, Texas, put himself into position for yet another championship victory by taking out Buford, Georgia’s Mickey Bruce Friday. Omori caught a limit weighing 7 pounds, 2 ounces – the day’s fifth-heaviest weight – and Bruce caught a limit worth 5-6.

“I’ve been fishing 10 years on the FLW Tour, and my whole career winnings aren’t even a half-million dollars,” Omori said. “So I hope to win my whole career in one day tomorrow.”

For the record, Omori has $351,791 in FLW Outdoors career earnings.

“I’m honored,” Cochran said about the show of fan support he’s been receiving all week. “I hope it psyches out everybody else.”

The last two bracket winners Friday give hope to any aspiring bass angler out there looking to score a big payday someday.

Anthony Gagliardi of Prosperity, S.C., advanced to the final round on the backs of his two small bass that weighed a collective 1 pound, 9 ounces. He beat Zell Rowland of Montgomery, Texas, who zeroed.

And in an unprecedented turn of events since the FLW Championship went to the bracket format, Robert Karbas Jr. of Wake Forest, N.C., advanced to the finals and will compete for a half-million dollars despite not catching a single keeper bass. His opponent, Lendell Martin Jr. of Nacogdoches, Texas, also zeroed, and Karbas won by tiebreaker since he was the higher seed coming into the championship.

“I feel like I’ve been shot at and missed,” Karbas said. “But I think, with this fishery and how it’s fishing right now, any 12 of us has the potential to get the right bag and win the half-million dollars.”

Next up: final showdown for all the marbles

The entire FLW season is now boiled down to this: 12 pro anglers vying against each other for the $500,000 winner’s check. All weights will be reset to zero for Saturday’s final round as the field competes in a one-day shootout to determine the champion. Heaviest sack of bass wins.