The heat is on

Field of 24 on the water for second round of FLW Championship; $25,000 co-angler champion to be crowned Friday

HOT SPRINGS, Ark. – Temperatures in the Hot Springs area are once again expected to climb back up toward 90 degrees Friday, and that seems only fitting as the pressure mounts for the second round of Forrest L. Wood Championship bracket competition at Lake Hamilton.

The pro and co-angler fields have been cut in half to 24 anglers apiece, and everybody’s weights have been reset to zero. The co-anglers are fishing in a one-day, 24-angler shootout to decide this week’s $25,000 champion, who will be crowned at this afternoon’s weigh-in.

On the pro side, however, thanks to the bracket format, there are 12 individual minitournaments going on Friday among the 24 anglers. After today, the 12 who advance beyond their head-to-head matchups to tomorrow’s finals will have their weights again reset to zero and will compete against each other for the top prize. 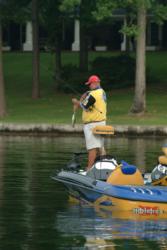 The prospect of catching the fish, though, might become even a little more difficult over the next two days – if that’s possible. In addition to the withering heat, which has been pounding these guys hard throughout the week, there is some doubt among the pros about whether they have any gas – and bass – left in the tank, thanks to the weather and the amount of work it took just to get this far.

“I had to beat Rob Kilby, so I caught all my fish the last two days,” Takahiro Omori said. “Now I don’t know what to do.”

The fishing has been so tricky that Tom Monsoor, known for his propensity to throw his homemade swimming jig no matter what the lake, resorted to some extreme measures.

“I fished for four hours with a DB-22 (crankbait),” said Monsoor, who was bumped from competition by Matt Herren Thursday. “I went for big fish. I knew I had to do it because of what Matt caught Wednesday.”

Adding to the pressure will be the increase of boat traffic on Lake Hamilton as we head into the hot summer weekend. If the sun sticks around, the anglers could see something on the water akin to the crazy yacht club scene in the movie “Caddyshack.” 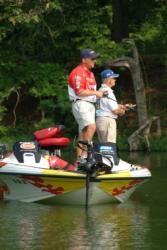 On the other hand, rain squalls have hit the area hard late in the afternoon the last two days, and the forecast is calling for a 60 percent chance of more storms Friday. That could cut down on the recreational boat traffic and provide relief from the heat a little bit.

More importantly, it could really turn on the topwater bite.

And while a lot of pros are bemoaning the tough conditions, lack of fish and overall pressure they’re under, there’s also a lot of gamesmanship going on behind the laments. Pros who are already reflexively secretive about their fishing might be heading into downright misleading territory this week. And with a half-million dollars on the line, how can you blame them?

For instance, Tracy Adams, who caught 5 pounds of bass more than everybody else the first two days, said that he burned through all his fish to do it. But he also hinted that he has another location or two lined up for today. Herren and Dean Rojas said much the same thing. 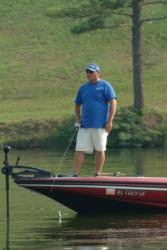 “I’m going to some water that I haven’t even been to yet,” Herren said.

“It’s just going to come down to whoever can catch that 3 1/2-pounder,” said Adams, who squares off against Strader Friday. “That’s who will advance.”

For bass-fishing fans unable to attend the festivities in person, you can catch all the weigh-in action live at FLWOutdoors.com with FLW Live. Show time starts at 5 p.m. Central.