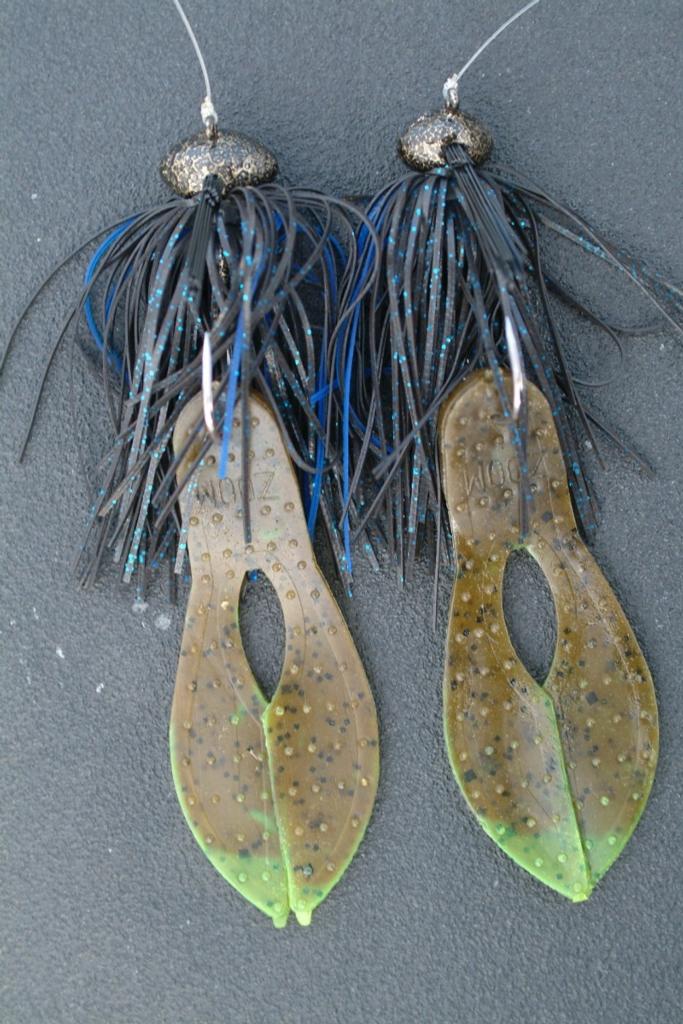 Gettin’ jiggy with it: Just three weeks after FLW Tour pro Anthony Gagliardi of Properity, S.C., made bass-fishing headlines by dragging heavy jigs in the deeper haunts of Lake Murray, jigs once again played a large part in the success of the top five anglers at the FLW Tour event on Pickwick Lake.

With the exception of Rob Kilby, who was using a suspending jerkbait most of the week, the other top four pros were fishing jigs almost exclusively.

And just as Gagliardi committed to a deep-water, jig-dragging game plan to win on Lake Murray, George Jeane Jr. of Evans, La., used nearly the same strategy to win on Pickwick Lake.

What made the winning patterns so similar on two different lakes? According to Jeane, cold, clear water.

“When I got to Pickwick and saw the water was 46 degrees and clear, I spent my entire practice graphing deep water on the lower end, looking for breaks and brush piles in 18 to 22 feet of water,” Jeane said. “I got out there and idled around for hours, studying my Lowrance graph. The detail on that Lowrance is incredible. When I’d find a brush pile or deep drop, I could see the fish relating to the feature.”

In addition, other top finishers used jigs, too. Here’s a brief look at their patterns.

Second place: Jim Moynagh of Carver, Minn., used his namesake Rock Jig made by All Terrain Tackle in a 3/8-ounce size with a watermelon twin-tail trailer tied to 12- and 16-pound-test fluorocarbon line.

Moynagh fished the lower end of Pickwick as well, targeting bluff ends that tapered off into 5 to 15 feet of water. He also located a large brush pile in 25 feet of water that gave up a few key fish during the week.

Walker fished Wheeler all four days, casting his jig to bluff ends and dragging it down the bank out into 15 feet of water.

“With the warm, sunny weather, I just knew my fish would eventually move shallow, right up on the shallow rock, but they never did,” Walker explained. “All week my bites came out deep, off the bluffs.”

With his boat sitting out over 25 feet of water, Morehead used the jig on steep 45-degree banks in Wilson, dragging it slowly over chunk rock down to 20 feet.

Kilby stays with Staysee: Going into Pickwick, many speculated that suspending jerkbaits would be the hot ticket. But pro Rob Kilby was the only angler to ride a suspender into the top five.

Kilby used a Lucky Craft Staysee 90 jerkbait on 12-pound Vanish in both Wheeler and Wilson to finish third.

Pickwick top five lures: While jigs and jerkbaits were responsible for many of the catches on Pickwick, lipless rattling crankbaits, spinnerbaits and the ubiquitous shaky-head worm were also popular choices.

From hero to zero and zero to hero: When Gabe Bolivar of Ramona, Calif., brought in 14 pounds, 4 ounces for third place on day one, it looked liked he would be a shoo-in for the top 10. But the next day, Bolivar zipped.

“I think boat traffic killed me,” Bolivar said. “Not necessarily fishing pressure, but actual boat traffic running up and down the (Tennessee-Tombigbee) canal. The fish bit best for me the first day after all the boats were done running. The water settled down and became calm and clear. But on the second day, for some reason, boats were running back and forth in the canal all day long. The boat wakes kept the water sloshing around on the bank, making it cloudy, and I think that impacted the bite.”

Still, Bolivar ended up 22nd with his strong day-one stringer.

On the flip side, Karen Savik of St. Louis Park, Minn., zeroed on day one but turned in four bass for 12-13 on day two to go from nowhere to 27th place.

“I completely changed water on day two,” Savik said. “I started out fishing the same place I fished on day one, and by 10:30 I didn’t have a fish and I said, `I’m not going to let this place do this to me again.’

“I had nothing to lose, so I just started fishing places I had never fished before. I pulled into this good-looking bay that I’d been passing up all week, and as I fished into the area, I really liked it – it had wood, rock, eddies and current breaks, and I caught every fish on a jig.”

Pat Fisher of Buckhead, Ga., also took a zero on the first day but rebounded with five fish weighing 12-10 on day two to finish in 30th place.

For Fisher, it was a matter of getting to his fish on day two. The pro was running nearly 100 miles to the west, through two locks, into Mississippi to a lake that was beyond Bay Springs Lake.

The ploy was a huge gamble because Fisher only had three hours to fish once he reached his destination.

He lost the gamble on day one when both locks were having barge traffic issues.

“They said it would be an hour before the last barge got out of the second lock,” Fisher said. “And I couldn’t risk it, so I turned around and tried to salvage the day elsewhere, but I really had nothing else going.”

On day two, everything went smoothly. Fisher cleared the two locks, got to his primary place and caught a limit in 30 minutes. He eventually culled through two limits of fish with a jerkbait and finished 30th.

Points shuffle: With half of the FLW Tour season now in the books, the top-48 FLW Tour Championship field is starting to tighten up, and consistency is becoming golden. Catching just a couple of keepers at Pickwick went a very long way in holding some anglers solidly in the top 48.

Those enjoying a rocket ride up through the standings into the top-48 championship field after Pickwick include Moynagh, from 50th to 14th; Ramie Colson, from 93rd to 38th; Andy Morgan, from 86th to 34th; and Kilby, from 60th to 19th. Tommy Biffle yo-yoed back from 100th to 45th, and winner Jeane Jr. went from 42nd to 10th.

Those taking a tumble out of the championship field after Pickwick included previous leader Ralph Laster, from first to 59th; Luke Clausen, from ninth to 68th; Shinichi Fukae, from 11th

As Morehead, a previous FLW Tour Angler of the Year, perused the recent points-race sheet and found his name in the sixth position, a big smile crossed his face. Morehead has won events at the next two upcoming FLW Tour venues: Beaver Lake and Kentucky Lake. Needless to say, he already likes his AOY chances.