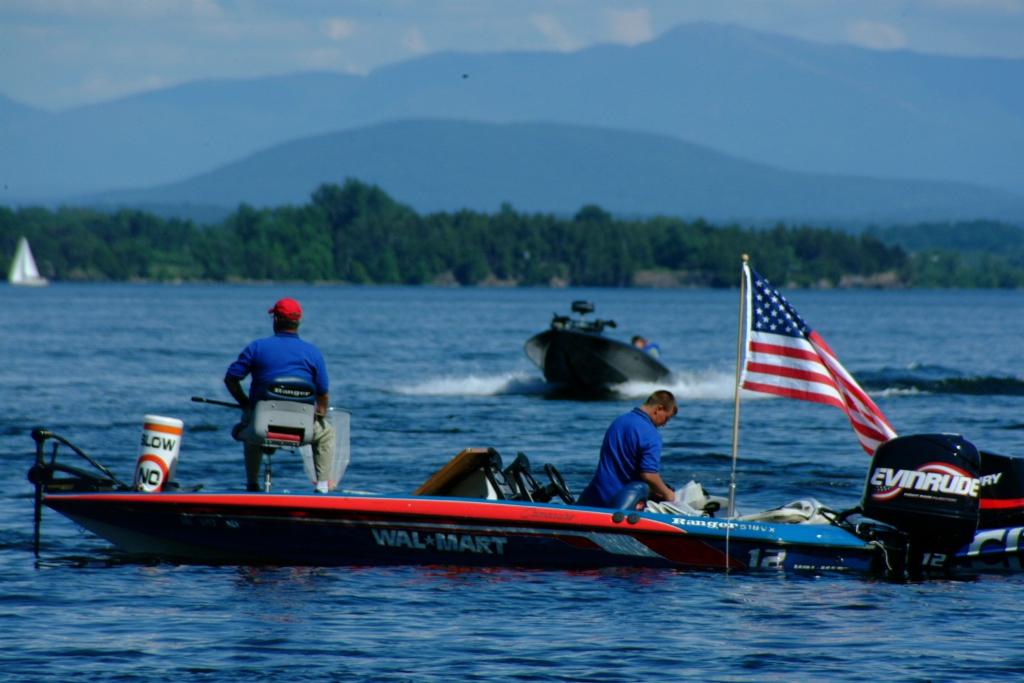 Anglers check in at the end of the day with the official Wal-Mart boat on Lake Champlain beneath the picturesque Adirondacks. Photo by Jeff Schroeder.
June 20, 2006 • Jeff Schroeder • Tackle Warehouse Pro Circuit

This just in: Lake Champlain could be a tough fishery this week, but it’s all in a relative way. The bass-fishing jewel of upstate New York and Vermont is still better than most every other pro tournament venue.

It’s not every day you hear “Lake Champlain” and “tough fishing” in the same sentence, but that just might be the case as the final stop of the 2006 Wal-Mart FLW Tour regular season unfolds out of Plattsburgh, N.Y., this week.

“I’ve fished the lake for about 12 years, and I’ve actually seen a steady decline in the fishing since then. It’s just not like it used to be. This place has seen a lot of tournaments in recent years, and the fish are getting wiser,” said pro Randy Blaukat, who led the FLW Tour event at Lake Champlain in 2004 heading into the final day and ultimately finished in fourth place. “It’s not the place it was even two years ago. The thing is, you don’t really notice it because of the new 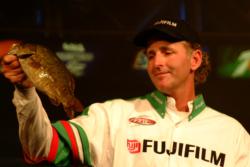 technology, baits and techniques that come along every year and people keep catching fish, but I very seldom talk to anybody anymore who catches more than 10 keepers a day here.”

Catching 10 keepers or more on some fisheries is a career day, but at Lake Champlain it’s supposed to be the norm. After all, this is the lake that has historically sets all the records for total tournament catches, weights and just generally making bass anglers happy.

But Blaukat and other pros practicing for this week’s FLW Tour contest kept a keen eye on the results from the Wal-Mart Bass Fishing League Empire Division event held at Champlain on Saturday. The winning weight for the one-day tournament, caught by West Rutland, Vermont’s Thomas M. Lavictoire, came in at 18 pounds, 10 ounces. And it took a mere 13-9 to clear a check.

“That’s extremely low for here,” Blaukat said. “I was really surprised by that.”

One of the reasons could be the recent conditions. Lake Champlain has seen a lot of gloomy weather over the last month, and the impact that has on the lake’s prolific smallmouth population is significant.

“Locals have been saying it’s been cloudy for, like, a month,” Blaukat said. “When you’re fishing for smallmouths, I’ve never seen a lake where the bite will change so much depending on the clouds or the weather. And the bite really has gone down the last couple of days.”

With all the rain, the lake is also at flood stage, about 5 feet higher than the last time the FLW Tour visited in 2004. That could alter some pros’ strategies as they weigh the benefits of fishing for smallmouths or largemouths. The high water has flooded all kinds of new shoreline timber and backwater, which is prime largemouth territory.

“It’s really flooded in the trees, and that will create opportunities as far as largemouths are concerned,” Blaukat said. 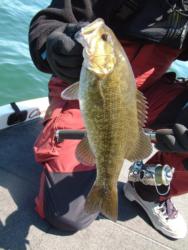 Smallmouths, though, are the bread and butter for many tournament anglers on Champlain. More specifically, as usual here in June, spawning smallmouths will play a key role in deciding who makes the cut. As of now, it’s a safe bet that most pros already have a whole lot of spawning beds marked in their GPS units. The trick to the smallies, however, won’t be just finding them, but finding the big ones.

“The smallmouths are basically in all three stages right now. Some are spawning, some haven’t yet, and some are done,” Blaukat said. “They’re grouping up in size categories, and the difference in this tournament between a 3 1/2- and 3 ¾-pounder makes all the difference in the world. In the past, you’d go out on those flats and catch them in 5 to 8 feet of water. But for some reason, now you can catch them in anywhere from 3 to 20 feet. There are just a lot of options here right now, more options than I’ve ever seen.”

Different areas of the big, north-south-oriented lake will provide different results for anglers, as well, further complicating fishing efforts. Still, it’s a complication that most anglers drool over because, after all, this is Lake Champlain. Tough fishing or not, it’s still likely going to be a fishfest with limits galore.

“You can go to one 10- or 20-mile section and all you’ll see are beds, but then you won’t see any in the next section,” Blaukat said. “It’s a really complex situation. Literally, this tournament can be won in any way. We’re going to see everything from bed-fishing to topwaters to tubes do well. It’s going to be a good tournament.” 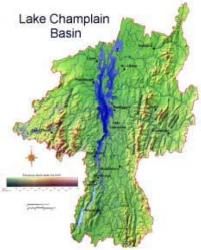 With 587 miles of shoreline and a maximum depth of 400 feet, Lake Champlain is huge. Meandering along the border of New York and Vermont, the lake boasts more than 70 islands and some of the most beautiful scenery in the United States, featuring impressive vistas encompassing the Adirondacks, Green Mountains and Taconic Mountains as well as the Champlain and Vermont valleys.

Lake Champlain flows from Whitehall, N.Y., north across the U.S.-Canadian border to its outlet at the Richelieu River in Quebec, where it eventually drains into the Atlantic Ocean at the Gulf of the St. Lawrence River. Although Lake Champlain is long – covering more than 100 miles from north to south – the lake is relatively narrow, measuring only 12 miles at its widest point. Champlain, which has an average depth of 64 feet, can be broken down into five distinct segments (from north to south): Missisquoi Bay, Inland Sea, Malletts Bay, Main Lake and South Lake.

The full field competes in the two-day opening round for one of 10 slots in Friday’s competition based on their two-day accumulated weight. Weights are cleared for day three, and co-angler competition concludes following Friday’s weigh-in. The top 10 pros continue competition Saturday, with the winner determined by the heaviest accumulated weight from days three and four.

The community is invited to attend the free Family Fun Zone Friday and Saturday outside the weigh-in tent in the Wal-Mart parking lot. The Family Fun Zone, which opens at 2 p.m. Friday and noon Saturday, features interactive displays, product samples and games for the entire family to enjoy. 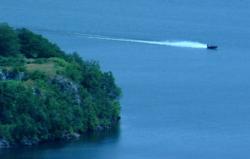 FLW Lake Champlain on TV and the Net

Coverage of the Lake Champlain tournament will be broadcast to 81 million FSN (Fox Sports Net) subscribers in the United States on Aug. 27 and Sept. 3 as part of the “FLW Outdoors” television program. “FLW Outdoors” airs Sunday mornings at 11 Eastern time. “FLW Outdoors” is also broadcast internationally to more than 350 million households in such countries as Germany, China, South Africa, Australia, Malaysia, Russia, Hungary and the United Kingdom, making it the most widely distributed weekly outdoor-sports television show in the world. Additionally, FLW Outdoors is proud to provide tournament coverage to more than 800,000 servicemembers stationed around the world in 177 countries and aboard Navy ships through broadcasts on the American Forces Network.

You can also catch all the weigh-in action at FLWOutdoors.com with FLW Live. The first weigh-in will be broadcast Wednesday, June 21, at 3 p.m. Eastern time and will continue throughout all four days’ weigh-ins.