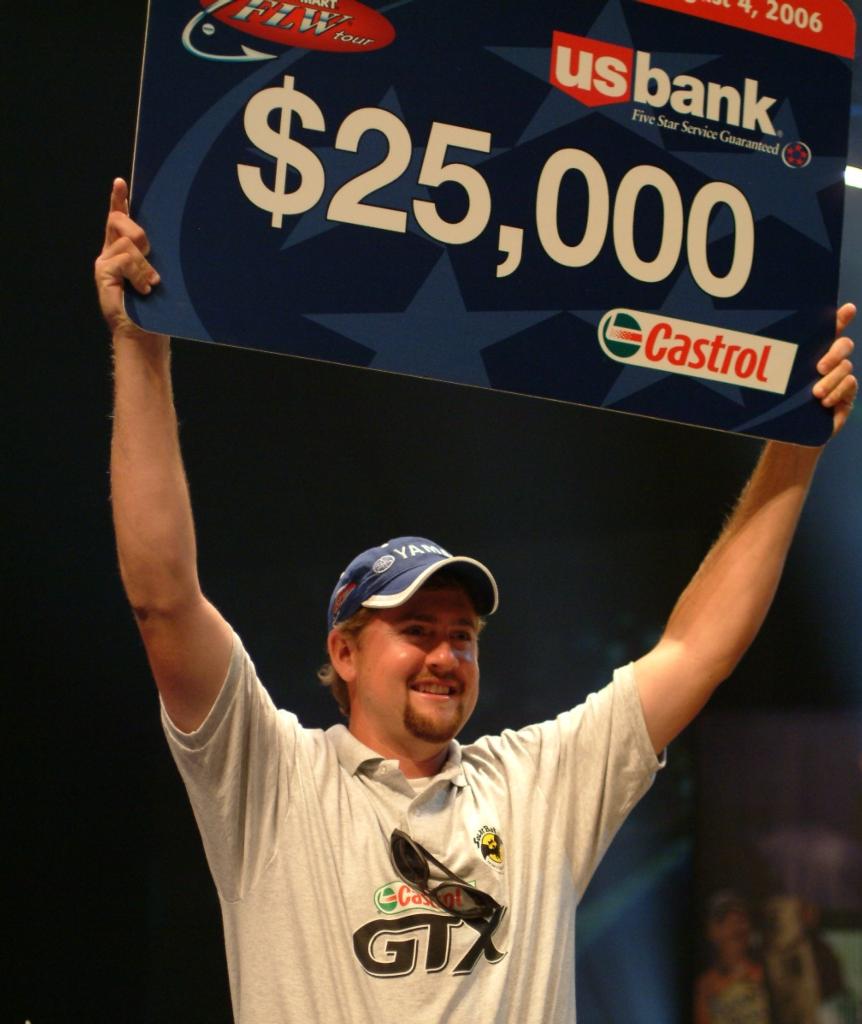 BIRMINGHAM, Ala. – For most of the 2006 FLW Tour season, Matt Arey of Shelby, N.C., fished patiently in the shadows of his good friend and travel partner Andy Montgomery of Blacksburg, S.C., while Montgomery tore up the Co-angler Division with three top-10s and a 2006 Co-angler Angler of the Year title.

Today, however, Arey got his time in the spotlight as he bested his friend Montgomery by just 7 ounces to win the 2006 FLW Tour Championship Co-angler Division with five fish weighing 11 pounds, 15 ounces.

“All year I never made a top-10,” Arey said shortly after receiving a winner’s check for $25,000. “I kept wondering when it was going to be my turn, and now I’m overwhelmed. All of this probably won’t sink in until tomorrow.”

Arey’s magical week started with a trip far up the Coosa River with day-one pro partner Brent Chapman. Arey adapted to Chapman’s shallow-water plan with a Chatterbait in shallow grass and a Shaky Head worm pitched to lay-downs.

“Andy and I practiced together all week,” Arey said. “We found this one dock that

was just awesome; it always had fish around it. And in the last few minutes of day one, I convinced Brent to go to it, and I culled twice with a Shaky Head.”

On day two, Arey rode with Dan Morehead and collected 5 pounds, 15 ounces on a Shaky Head from around docks.

Friday Arey was paired with Rob Kilby and once again had to adapt his fishing ways, this time for Kilby’s deep-water approach.

“Kilby was fishing 12 to 18 feet deep, and I stuck with a Shaky Head and drop-shot all day,” he said. “I just got the right bites, that’s all. I caught my last good one at quarter of 2 (o’clock) and quit fishing.”

“It’s just been an incredible week for both of us,” Arey said of Montgomery. “He won Angler of the Year, and we finished (Nos.) 1 and 2 in the championship – it doesn’t get much better than that.”

As Montgomery brought up his bag of fish to make an attempt on Arey’s lead during the final co-angler weigh-in, he said, “If there’s anybody I want to see beat me, it’s him.”

And with that, Montgomery placed 10 pounds, 8 ounces into the scales to finish second behind Arey for $15,000.

“I’m pleased with my year,” he said. “Matt and I have had a great year, and we’ve learned a lot.”

During the week he used a 1/2-ounce football-head jig and a 1/2-ounce flipping jig made by Shooter (formerly Outlaw Jigs), as well as Shaky Head worms.

Montgomery, who has earned a reputation – as well as a 2006 FLW Tour Co-angler of the Year title – with his jig-fishing ability, said he employed different jigs this week based on the situations.

“With Moynagh, I dragged the 1/2-ounce football out deep,” he said. “With Le, I would skip a jig under the shallow docks in dingy water, but skip a Shaky Head under deeper docks in clearer water – it was all according to each dock’s depth and water color.”

Montgomery reported trimming his Shooter jigs with a Fat Albert twin-tail on the football head and a Zoom Salty Chunk on the regular flipping jig, both in green-pumpkin.

While fishing docks with his pros, Cornett learned to keep a watchful eye on the depth finder for brush piles. When he spied a bumpy blip rising up off the bottom, he would quickly drop a 5/16-ounce Tightline jig behind the boat and drag it through the brush.

“Each of my different pros took me to some of the same docks throughout the tournament, so I remembered where the brush piles were on each one,” he said. “I made an effort to fish those piles while my pro fished the docks.”

Hudson had the privilege of fishing with Glenn Browne, Tony Couch and Kim Stricker during the week.

After a shallow-water expedition with Browne on day one, Hudson fished deep with Couch and Stricker on days two and three.

“I used the different weight sizes to match the speed and depth of my pro partners’ styles,” Hudson said. “If they were fishing slow and shallow, the 1/8-ounce was fine. But if they were fishing deep, like Stricker was today, I had to use the 3/16th and 3/8th to get it down faster.”

used it to his benefit on day two when fishing with pro Jason Knapp.

“Cochran was cranking a Lucky Craft RC 1.5,” he recounted. “So I borrowed one from Brent Ehrler and tied it on for day two. I ended up catching a 4-pound largemouth on it that day.”

Today, he fished with Brennan Bosley and again used the Lucky Craft crankbait to land two key keepers. The rest of his catch came on a homemade jig and a 3/32-ounce Shaky Head worm.

Rounding out the top 10 anglers in the 2006 FLW Tour Championship: