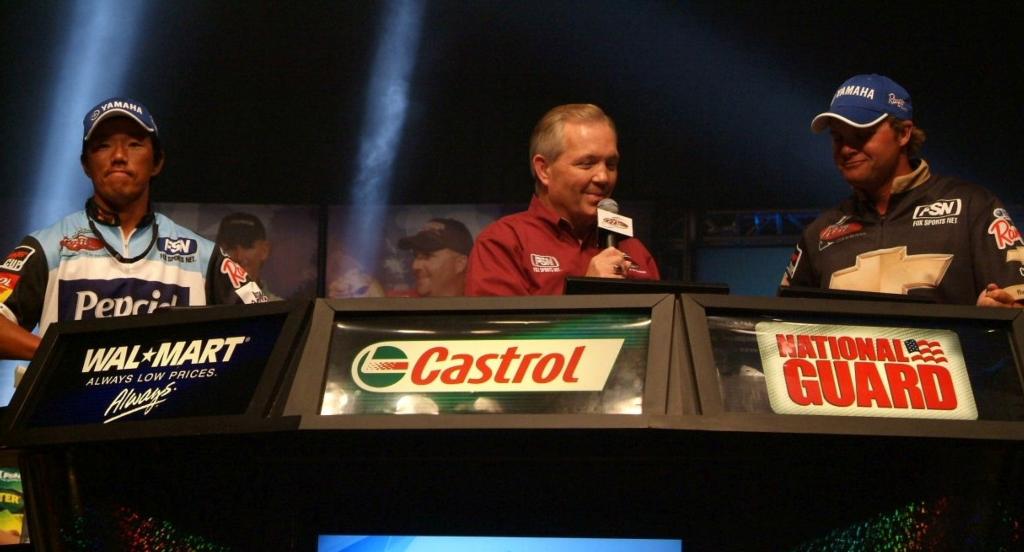 Clausen Fukae’d … Today’s tightest race kicked out the man who won the Wal-Mart FLW Tour Championship on this very lake back in 2004. Heavily favored to repeat after bringing in solid weights all week, Luke Clausen nonetheless succumbed to the force that should never be underestimated, Shinichi Fukae. Yesterday, Fukae kicked out Alton Jones by only an ounce, and today he sent Clausen packing by a scant 2 ounces. The bracket matchup was perhaps the strongest of the semifinals because not only have the pair been on fish all week, they’ve been on fish all year. Clausen made history in February by winning the Bassmasters Classic just a year and a half after winning his first half-million as the FLW Tour champion. Fukae, however, won not one but two FLW Tour events this year. “Yeah, it’s kind of devastating,” Clausen said in the moments after he fell to Fukae. “I don’t know what to think. It’s been a struggle all day – today I couldn’t get much going. I needed one more big one.” … Clausen also caught the heaviest weight not to make it into the final round. His 12-pound, 12-ounce day-three weight would have won every other bracket but one, as Brent Ehrler won his bracket with a day-three catch of 13-4. Kim Stricker is the angler to advance with the lowest weight, as he toppled Tony Couch with a four-bass catch that weighed only 7 pounds, 1 ounce. 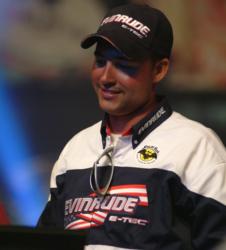 Technically, is this noodling? … No. 6 co-angler Jess Caraballo fished with pro finalist Andy Morgan today and benefited from Morgan’s gracious Southern upbringing. As if Morgan didn’t have better things to do – like, for example, trying to fish for $500,000 – he went so far as to lie on his stomach and pull a bass out of the water by hand for his co-angler partner. “We were fishing blowdowns up in the river, and I flipped my worm up into a tree,” Caraballo said. “I hooked the fish, and it started wrapping around limbs underneath the water. We couldn’t see it, but I could still feel it pulling.” Morgan had trouble getting Caraballo to the fish with just the trolling motor, so the two pulled on their life jackets, and Morgan fired up the big motor to inch closer to the tree. “It was still underwater,” Caraballo said. “We never saw the fish. He got down on his belly and felt his way down the line until he got the fish.” That bass enabled Caraballo to win $7,000 as a top-10 co-angler, but at the time, they were just glad it was indeed a bass. Said Caraballo, “He said, `I’m just glad that wasn’t a catfish or a turtle.'” 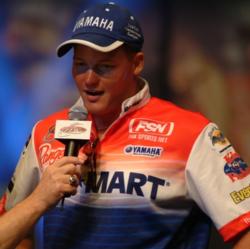 A pair of champions … Last year, George Cochran and Trevor Jancasz were the pro and co-angler champions, respectively, on Lake Hamilton. Both made it to day three at this year’s championship, and in a strange twist of fate, were randomly paired together today to make a boat full of champions. “It was kind of crazy,” Jancasz said. “Yesterday we were eating the dinner they serve us, and I’m sitting with George.” Shortly thereafter, the two found out they’d be fishing together. “We had a fun day,” Jancasz said. “It’s always better to know the person you’re fishing with, and I’d never fished with him. He’s tough to fish behind, but it was great to fish with the guy.” … Jancasz finished seventh on the co-angler side while Cochran advanced to the final round for a shot at consecutive championship victories. 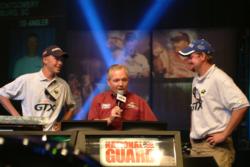 One-two punch … Runner-up co-angler Andy Montgomery was this year’s Co-angler of the Year, and he might have been a little more disappointed about not adding a championship victory to his list of accomplishments had he not lost to his roommate on the road – and friend of several years – Matt Arey. Making Arey’s victory particularly sweet, he said, is that Montgomery had been beating him all year long. “Every tournament, if I finished 50th, he finished 40th,” Arey said on stage. “But if I want to lose to anybody, it would be Andy.” … Indeed, the pressure was intense as Montgomery was the last co-angler to weigh in and thus the last man with any chance to unseat Arey. “One of us is going to finish second and one of us is going to win,” said Montgomery at the time. “If he beats me, it’s time.” Time it was, as Arey took the victory by a 1-pound, 7-ounce margin. It capped off a year in which the two travel partners, along with their other partner Bryan Thrift, made headlines from the get-go. With such talent in one place, they are bound to be competitive, but Arey says they have a sense of humor. “We joke about it,” Arey said. “I joke more than Andy does because he’s won more money all year. Bryan is our other travel partner, and he was demolishing me too, so I got my revenge.” The revenge remark is, of course, strictly tongue-in-cheek, and it was obvious Montgomery was proud of his friend, even if it did mean finishing second. 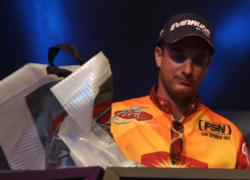 Stacked … The 12 pros who will compete in tomorrow’s final round read like a who’s who of bass fishing, with four anglers of the year and two championship winners in the mix. Take a look: Anthony Gagliardi is this year’s AOY and has two FLW Tour wins to his credit. Fukae was the 2004 AOY and earned two victories this year alone. Andy Morgan has a list of credentials as long as Jimmy Hoffa’s rap sheet, and a championship victory would just be icing on the cake after a career as long and illustrious as his. Clark Wendlandt is a two-time AOY with three victories to his credit and is considered by many to be the best FLW Tour angler of all time. Jay Yelas, a living legend who needs no introduction, was the 2002 AOY and won the 2003 Bassmasters Classic on Lay Lake, just outside Birmingham. Steve Kennedy is one of the hottest anglers in the nation at the moment, having won an FLW Tour event his year while making a run at the BASS AOY title that still could ultimately be his. Cochran not only won last year’s FLW Tour Championship but also holds the distinction of being one of the true legends of the sport, with a long and successful career that includes two Classic victories. Ray Scheide and Brennan Bosley are two of the FLW Tour’s most successful up-and-coming pros, and young Brent Ehrler caught the day’s second-heaviest weight, making him a true contender for the title. Kim Stricker rounds out the rest of the top 10, making his second championship appearance. Should he win, it will be his first FLW Tour victory, and what a way to start a winning streak. 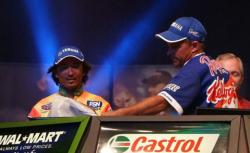 Close competition … The weights were a lot tighter today, as no one defeated their bracketmate by the huge margins seen on days one and two. The widest margin was Wendlandt over Toshinari Namiki, who lost by 5 pounds, 15 ounces. Ehrler also defeated Ramie Colson Jr. by more than 5 pounds, but that was as bad as it got. There were three brackets decided by less than a pound – in addition to the Clausen/Fukae matchup, Tony Couch exited by 10 ounces, courtesy of Stricker. Dudley defeated Scott Martin by only 14 ounces that took away Martin’s chance to redeem himself after losing the ’04 championship on Logan Martin by only 6 ounces. In one of the day’s bigger surprises, Gagliardi seems to have come down a bit off his opening-round high. After catching 28-9 over the first two days, Gagliardi brought in only 8 pounds, 8 ounces today to beat Danny Correia by 2 pounds, 6 ounces, a far cry from the 19-pound, 14-ounce beating he put on Ish Monroe during the opening round.

Namiki’s swan song … With Wendlandt’s victory over Namiki in a tough bracket, today marked the Japanese native’s final day of Wal-Mart FLW Tour competition. Namiki announced his intention to return to Japan next year several months ago and expected to return to Japan after the Lake Champlain event, but he slipped into the championship as the No. 47 seed to extend his American stay a little while longer. “I’m sure I will come back two or three times a year to (see) you,” Namiki said. “Some of my sponsors want me to do promotional work in Japan. I’m 40 years old, and I decided it was time to go back and take care of my parents.” … In four full seasons on the FLW Tour, Namiki secured his place in the history books with a memorable career that includes one victory in 2005, an incredible year that saw him score four top-10 finishes in a six-event season. He added one more top-10 to his resume this year with a 10th-place finish on Kentucky Lake, and he will leave the FLW Tour on a high note, having finished the championship in 24th place. 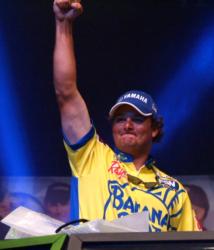 2: Number of pros who made the final round the last time the championship was held on Logan Martin – Gagliardi and Wendlandt.

14-3: Weight, in pounds and ounces, of the day’s heaviest stringer, which was brought in by Yelas.

25,000: Dollars earned by Arey in one day as the co-angler champion. 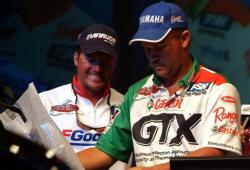 “We’re popping them out quick.” – Dudley, of having four kids in diapers.

“They leave their home and whoop us continually. It’s amazing; I take my hat off to them.” – Wendlandt, on the wildly successful group of Japanese anglers competing on the Wal-Mart FLW Tour.

“I came up here kind of needing to pee, and it’s not getting any better.” – Arey, while waiting for the rest of the field to weigh in while he stood in the hot seat as the leading co-angler.

“If a person’s going to get beat, I’d just as soon get beat by several pounds.” – Colson, taking the right attitude regarding getting kicked out by a 5-pound, 10-ounce margin.

“If it was an all-species tournament, I’d run away with it.” – Rob Kilby, who unfortunately couldn’t weigh in the catfish and drum that would have given him enough weight to unseat Cochran.

“I can’t Monday-morning quarterback it.” – Correia, on discussing the reasons why he was unable to get past Gagliardi.