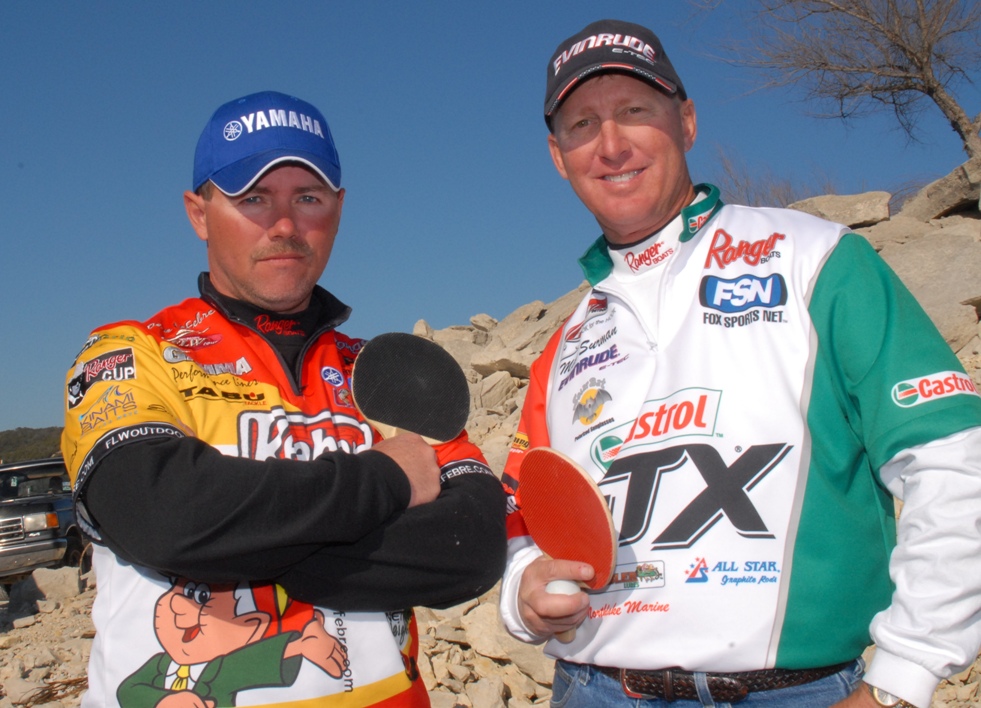 Battle of the paddle … Behind the scenes of intense fishing competition at the Wal-Mart FLW Tour event on Lake Travis, another serious, very serious, battle has been brewing. Unbeknownst to many, Kellogg’s pro Clark Wendlandt is a pingpong fanatic. And while the humble Wendlandt would never get braggadocios about his ponging ability, he certainly does not hesitate to leave a few insinuations about his “mad paddle skills” lying around from time to time. Over last year, Wendlandt’s fellow Tour anglers Mike Surman, Dave Lefebre, Alvin Shaw and Jim Tutt have caught wind of Wendlandt’s supposed pingpong expertise. As a result, the challenges, and associated trash talk, have run rampant. Well, tonight the score will be settled once and for all as Wendlandt is having a pingpong tournament at his house in nearby Leander, featuring the five pros. “If you think the man is fierce on the water, he’s ferocious at the pingpong table,” said Surman of Wendlandt’s pingpong penchant. “He’s an animal behind the paddle.” Wendlandt has already sampled his competition to some degree, thrashing both Surman and Lefebre in pretournament matchups. “I’ve played Wendlandt, and honestly, as much as he plays, he should be a lot better than he is,” Lefebre quipped. Shaw, who has yet to play the Pong Kong, seems unconcerned. “He might sling a fishing pole pretty good, but we’re going to find out what he can do with a paddle tonight.” The dark horse in the Pong-a-Palooza just might be Jim Tutt, whose family is pretty serious about pingpong tournaments during the Christmas Holidays. “He’s going down, tonight,” Tutt said. But then Tutt began complaining about a “shoulder injury.” Wendlandt’s response to all of the paddle tattle: “I’m actually a little worried about Tutt. I’ve never seen him play.” Uh, boys, don’t stay up too late with your slams and spins. Remember, some of you have a fishing tournament to tend to tomorrow.

Jerkbait King … Going into the Lake Travis event, there was some speculation that jerkbaits

would be key players. Though no jerkbaiters surfaced in the top 10, one angler known for his jerkbait expertise, Stacey King, did make the lure work this week. He sacked opening-round weights of 7-14 and 9-15, respectively, to finish 19th. “When I first got here in practice, they were biting a jerkbait real well,” King said. “But I think that two or three days of cloudy, cold weather put a damper on it. This time of year, you want sun and wind for a jerkbait. We’ve had that the last two days, and it was just starting to get good again this afternoon. I had a much better today than yesterday, and this afternoon they were really biting it.”

Survey says … Jigs are certainly the dominant bait at the Lake Travis FLW Tour event this week. But a quick survey revealed a couple of other techniques working for the top 10 pros. The breakdown is as follows: six finalists are using jigs; one pro is using a shaky head; one is relying on a drop-shot; one is cranking; and the other is using a Float ‘N Fly.

What happened to Chapman … On day one of the Travis event, Bill Chapman sacked up 13 pounds, 6 ounces and found himself tied for second place. Today, Chapman brought in just one bass for 1-5 and fell to 53rd place. “I don’t know what happened,” Chapman said. “I had a really good practice. I was fishing stair-step ledge rock in about 5 to 15 feet of water with an Eakins Jig. Yesterday, I only hit five of my best 10 places and caught six keepers pretty quick. Then I left them and went fishing new water. When I went back to my best stuff this morning, I couldn’t make it work again on any of my places – those fish were gone.”

0: The weight all final-round pros and co-anglers will have when they start day three.

1: The pound-test of Bobby Lane‘s fishing line today. He was using Berkley’s new Crystal Fireline braid in a 1-pound-test.

14: Number of pingpong games in which Clark Wendlandt has beaten Dave Lefebre.

55: Depth of water, in feet, that Tracy Adams caught a bass out of today.

77: Number of limits caught in the Pro Division on day two.

14-14: Weight, in pounds and ounces, it took to score a $10,000 check in the Pro Division after two days of competition on Lake Travis.

21: Weight, in pounds, it took to make the top 10 after two days on Lake Travis.

“Some of you guys might think that’s a bunch of mushy stuff, but you don’t have to go home and live with her like I do.”

– Danny Pierce, remarks after wishing his wife a belated Happy Valentine’s day over the Internet.

“Yes, it’s true: My wife was a head cheerleader at the University of Texas. But that’s because she did not have the grades or the SAT score to get into A&M.”

“Does anyone have any 5-pound rocks to put in this basket?”

– Dave Lefebre‘s response to questions about his top-10 plans.