‘Off day’ on Travis 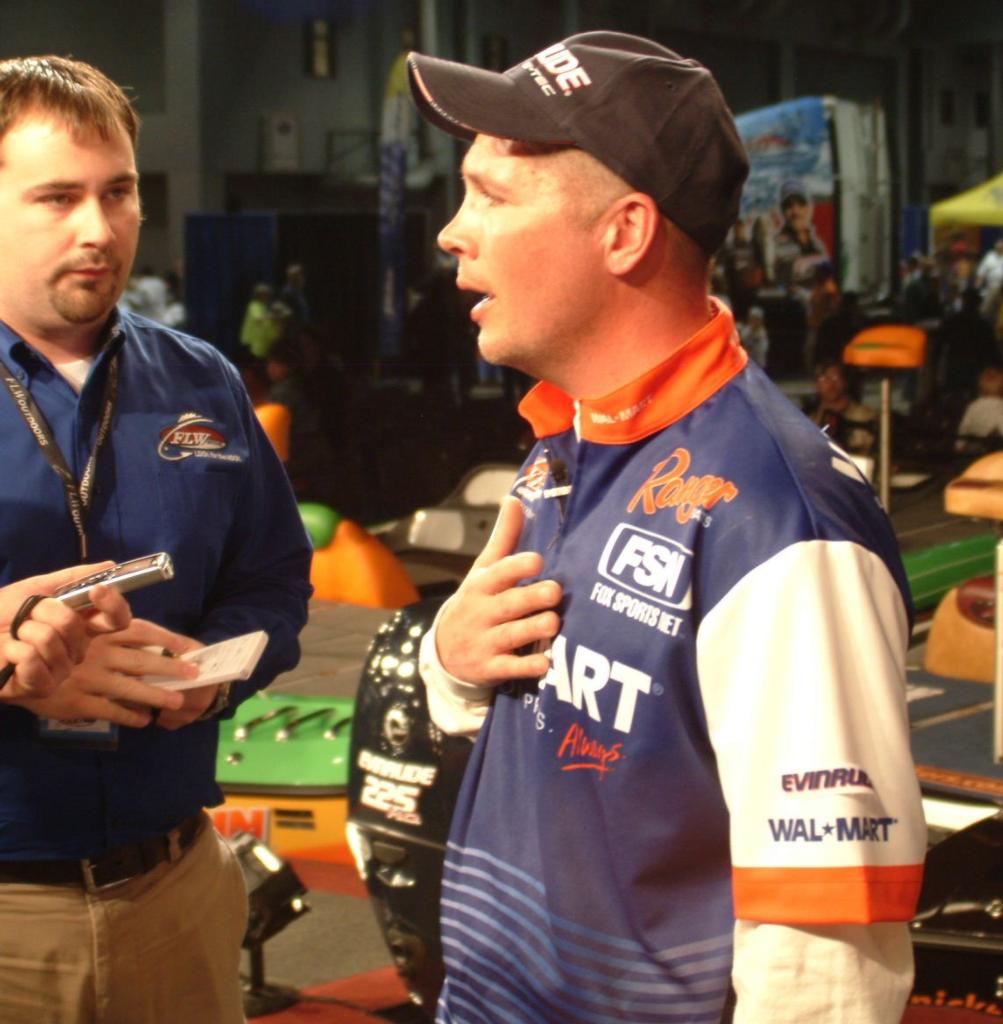 AUSTIN, Texas – Remove 190 boats from a lake where catching a limit was relatively easy during the opening round, and the fishing has to improve. Right? Apparently nobody told the fish as only four of the 10 pro finalists were able to catch a limit on day three of the Wal-Mart FLW Tour season opener. While none were heavier than 10 pounds, young gun Aaron Hastings topped all competitors with five Lake Travis bass that weighed 9 pounds, 15 ounces.

The conditions changed slightly on day three, as temperatures warmed to the low 60s. Most anglers felt warmer weather would enhance the bite, but just the reverse happened. Hastings was the only pro who caught them good – and it took him a while to adjust to repositioned fish.

“Every day in the tournament they came early, except today,” said the Middletown, Md., pro. “Today at 11 a.m., I didn’t even have a fish.”

Hastings has done a masterful job of managing his fish, and Saturday was no exception. He perused the same general area as he did during the opening round, with one important adjustment. 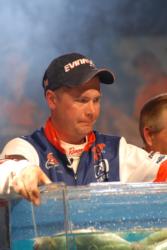 “They actually went deeper with the warmer water,” he said. “It took me a while to figure it out. You would think that, with the rising water temperatures, they would go shallow.”

Hastings found the same group of fish on the next break in 18 to 24 feet of water. On Thursday and Friday, that school of fish was in 10 to 12 feet of water. His area, located in the back of a creek, is definitely holding fish. Hastings’ co-angler partner, Frank Divis Sr., won his division despite losing a 5-pouner at the boat. The primary structure comprises floating docks that the fish trail as they migrate.

“I’ve got other areas that I can go and catch a limit. But to catch over 10 pounds, that is the spot.”

His presentation consists of a drop-shot and a 4-inch finesse worm. He also occasionally mixes in an 1/8-ounce jig.

“The whole key is to fish slow. It’s not in a fisherman’s nature to fish slow. They didn’t want to move very far to get the bait today.” 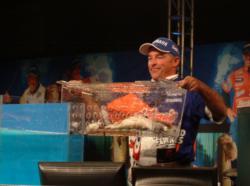 All eyes were once again on Leander, Texas, pro Clark Wendlandt. And for the second consecutive day, the Kellogg’s pro caught a small limit – this one weighing 7 pounds, 12 ounces. In fact, Wendlandt caught only six keeper-sized bass the entire day, a far cry from his day-one performance, when he caught 15 fish and weighed five for over 17 pounds.

“I’m not happy with it, but I’m still in the tournament, so that’s OK,” said the veteran. “I still feel like I have a good chance to win.”

Wendlandt divulged today that he is running two distinct patterns. He fishes mainly with a 9/16-ounce jig, but occasionally he pulls out a crankbait. The crankbait is his big-fish bait, but it’s not nearly as consistent as the jig.

The pretournament favorite says he still feels he has enough fish to win. But the clock is ticking, and Wendlandt has only one day left to make his move.

“The guy that wins tomorrow is the guy who is not afraid to change. I’ve got an area that I thought was my best spot that I haven’t fished yet. I don’t know, I may fish that tomorrow. I know the best way for me to do well is to go fish what feels right.”

ChatterBait maestro Bryan Thrift of Shelby, N.C., was one of only four anglers to catch a limit on day three. His five bass weighed 7 pounds, 6 ounces and put him in third place with one day of competition remaining.

On day three, Thrift stayed away from his money-making ChatterBait, instead opting to throw jigs underneath docks and pontoon boats, much like Hastings. 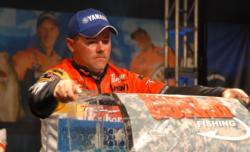 Opening-round leader Dave Lefebre of Union City, Pa., caught five bass weighing 6 pounds, 8 ounces for fourth place Friday. Lefebre lost a big fish on his first cast this morning – little did he know it would be one of only a few bites.

The Kellogg’s pro has been getting his better bites early in the day with a jig and a twin-tail trailer. In fact, he’s had most of his good fish in the boat by around 8 a.m. With such a small window of opportunity, Lefebre has his work cut out for him on day four.

“Tomorrow I’m going to be ready for them,” he said.

Fishing in his first FLW Tour event, Craig Dowling of Madison, Ala., placed fifth for the pros with a four-bass weight of 5 pounds, 8 ounces. His key bait was a shaky head with a small worm.

“I think I’m around them, but obviously they didn’t bite real well today,” he said.

Rounding out the top 10 pros heading into Sunday’s final round on Lake Travis:

Day four of the season-opening FLW Tour event on Lake Travis begins as the final-round field of 10 boats takes off from Travis County Mansfield Dam Park in Austin at 7 a.m. Central time Sunday. Saturday’s weights carry over to Sunday, and the $125,000 Pro Division winner will be determined by two-day combined weight.