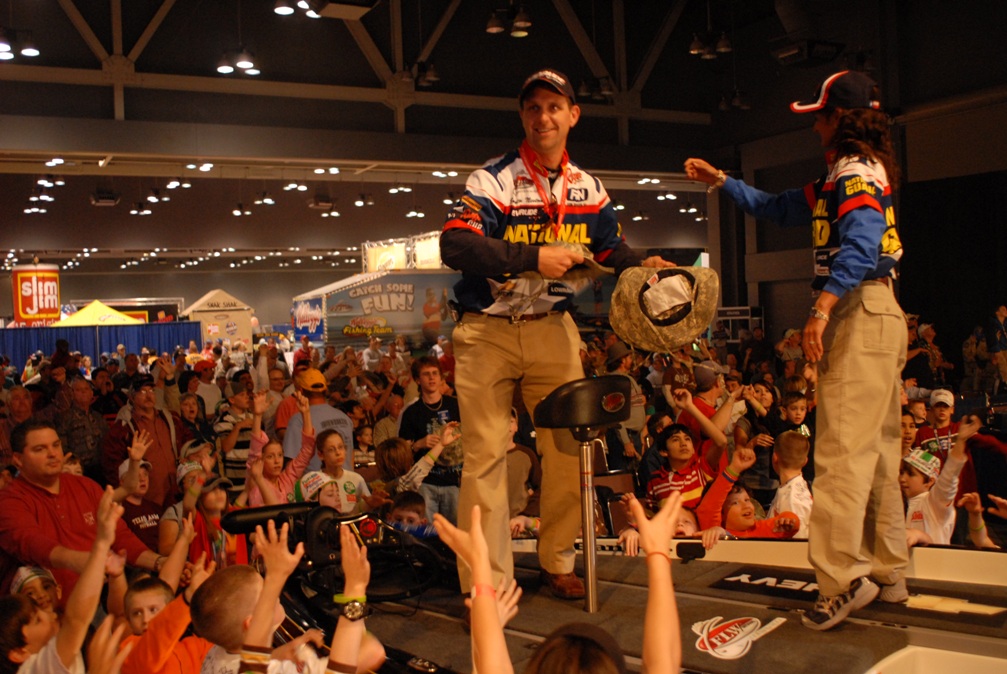 Indoor expansion … FLW Outdoors made history today by being the first fishing tournament organization to ever weigh in fish at the Austin Convention Center. The Wal-Mart FLW Tour’s expansion into indoor arenas and convention centers for 2007 got off to a successful start by bringing the Family Fun Zone and the day-three weigh-in under one roof. With plenty of protected indoor floor space, FLW Tour sponsors are given plenty of room to showcase and demonstrate their products. FLW Tour

pros are on hand to offer helpful fishing seminars, chat with fans and sign autographs. Also, kids can enjoy plenty of games and video simulators without worrying about the weather. And when the weigh-in begins, it’s just a few steps away. If you live in the Austin area and missed the free FLW Tour Family Fun Zone and weigh-in today, be sure to come out to the Austin Convention Center on Sunday to enjoy the show and watch one pro win a potential $125,000.

The Mayor makes history … Co-angler Doug Caldwell, affectionately called the Mayor due to his occupation as mayor of his hometown in Kane, Pa., had the honor of being the first angler to ever weigh in a fish in the Austin Convention Center. “This is quite an honor,” Caldwell said. “Whether I win or not, at least I’ll be able to say I was the first guy to ever weigh in a bass in this convention center. Caldwell finished runner-up in the Co-angler Division with a limit weighing 6-14.

of all time today when asked about his two-fish catch for 5 pounds, 5 ounces. “I had a pocket full of my autographed Ron Shuffield trading cards in my pocket this morning,” he explained. “And I think a couple of them blew out of my pocket on the way to my first spot, sank to the bottom and the fish got a good look at me, and they have been avoiding me ever since.”

Green goes in … This morning when Jerry Green reached his first fishing spot, he leaned over to adjust his depth finder, and when he did, his Solar Bat sunglasses, which had been propped up on his hat, fell off into the lake. Green, in a desperate attempt to save them, got a little overzealous and went into the water after them. When Keith Lebowitz asked Green if the FOX camera crew got the incident on film, Green said, “I wish they didn’t, but I’m afraid they did.”

angler Frank Divis Sr. is a football-head jig fanatic. Some even call him Football Frank for his dedication to the technique. In fact, over the years, Divis has given some of the best pros in the business a lesson on dragging a 3/4-ounce PJ’s football-head jigs for deep bass. So it only seems to reason that when Divis took his fourth FLW Outdoors win (second Tour win) today, he did it with a football-head jig. But ironically, Divis used a drop-shot to win. Divis fished with tournament leader Aaron Hastings today, and when he saw how Hastings was fishing, he knew his jig would not work. “The way Aaron was fishing prevented me from using the jig the way I normally would,” Divis explained. “So I spooled up some light line, rigged up a drop-shot, dropped it overboard, started shaking it on the bottom, and the fish ate it up.”

Pong Kong … And now for an update on the Battle of the Paddle Ping Pong Tournament, which took place at Clark Wendlandt’s house last night: “I thrashed them all,” Wendlandt said without hesitation. “All night, I went undefeated.” At press time, the defeated were unavailable for comment.

135,335: Amount, in dollars, Divis has won as a co-angler in FLW Outdoors competition.

1: Number of FLW Tour top-10s made by Hastings, Thrift, Dowling, Shuffield and Defoe.

4: Number of limits caught in the Pro Division.

2: Number of limits caught in the Co-angler Division.

5: Temperature, in degrees, Caldwell said his hometown had been experiencing as of late.

53: Temperature, in degrees, of the water Green fell into this morning.

2-3: Weight, in pounds and ounces, that hometown favorite Wendlandt is off the lead going into day four.

“Do these people here know what snow is?”

– Co-angler Doug Caldwell, telling the weigh-in crowd about the 25 inches of snow his hometown of Kane, Pa., just received.

– Keith Lebowitz, asking pro Jerry Green how he got back in the boat after going overboard for his sunglasses.”

“When Clark Wendlandt gets done fishing a dock, there’s nothing left.”

– Co-angler Shawn Stewart, providing a very legitimate excuse for not weighing in a bass today after being paired with Wendlandt.

“I say I’m lucky, but everyone else is starting to rule that out.”