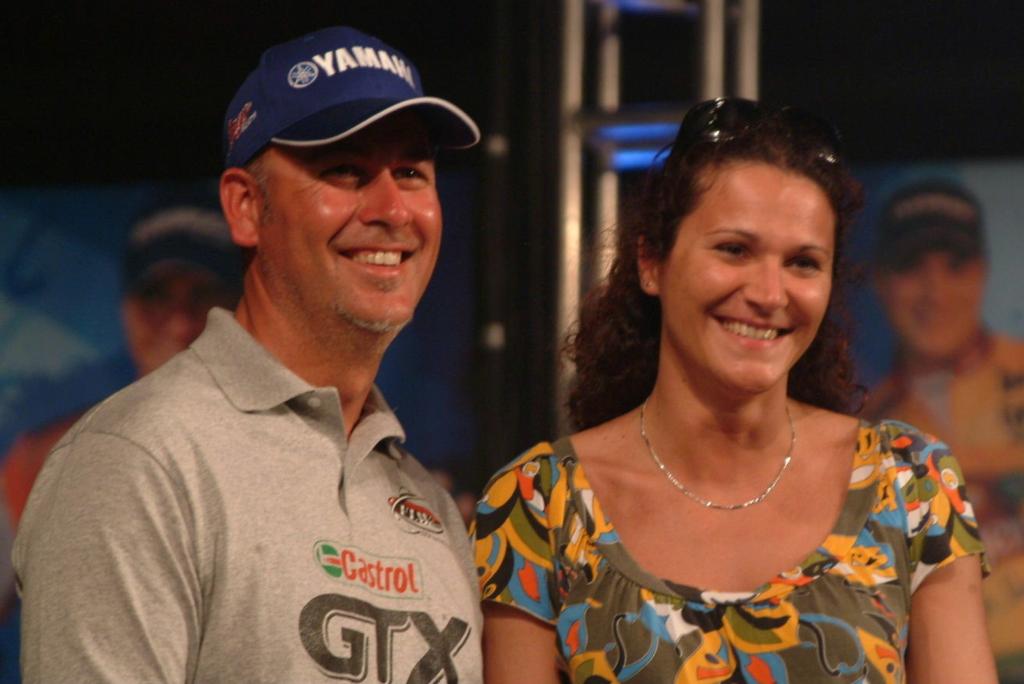 Wedding bells are ringing … Italian co-angler Alessandro Debbi is certainly making the most out of his time in the United States. Today, he took second place and $10,000 – not bad for three days’ work – and also announced to the world he intends to marry his girlfriend, Cinzia Calzolari, who was in attendance. Whether this was a shock to Calzolari is unknown – Debbi didn’t exactly get down on one knee – but some things might have been lost in translation. When asked by “FLW Outdoors” television host Charlie Evans if she accepted, she said, “I don’t know,” to which Debbi cheekily replied, “We will talk in Italian later.” Later, Calzolari said her answer was a definite yes – “It’s a promise,” she said. Debbi said their first order of business is to pick a wedding date, something they can surely discuss on the way home. “We have more than eight hours of flight time – that’s plenty of time to discuss a date,” Debbi said. “I’m proud to finish second, but it would mean a lot more to get married.”

Catch and haul … Lake Norman has certainly been put on the map this week as a prime bass-fishing destination, as competitors have been consistently impressed by the amount of fish they were able to catch every day. The numbers have fallen a little bit the past couple of days, but that is no reflection on Lake Norman. Rather, that is an indicator that a big bass tournament is in town – and Mother Nature, of course, always takes her own toll. “It was all due to a weather change,” said No. 2 pro Scott Suggs. “We were in the second day behind a front. The biggest key was the wind shift – the wind flip-flopped, and anytime that happens, the bite is tougher.” … Indeed, while most of the field reported catching several limits’ worth of bass per day, only eight of the top 10 (and one co-angler) caught five today, causing leader Larry Nixon to moan, “I only caught nine keepers today.” Moaning aside, Larry and the boys who have been fish-catching machines all week are the other major reason why the bite is a bit depressed. “Another factor is having 400 anglers on the lake for two solid days,” Suggs said. “That’s like having 800 anglers who all nearly limited. In practice, it’s catch and release, but in a tournament, it’s catch and haul.” While the bass are returned to the lake in excellent condition – FLW Outdoors typically maintains a 98 percent or better live-release rate – they’re not going right back to the places from which they came, meaning some anglers, like Suggs, had to find new water. “I had to change areas,” he said. It obviously didn’t hurt him too much, as he’s currently trailing Nixon by only 1 pound, 5 ounces from the No. 2 spot.

A name to remember … If you’re an FLW fan who hasn’t yet become familiar with Bryan Thrift, it’s time to get out from under that rock. The FLW Tour rookie phenom spent just three short seasons working his way up the chain, starting in the Wal-Mart Bass Fishing League before taking the Stren Series by storm. Along the way he has racked up 11 top-10 finishes – 12 if you count his current top-10 position on Lake Norman – and three victories. In only three events on the FLW Tour so far, Thrift has managed to score a top-10 twice, making him currently ninth in Angler of the Year points standings. So not only is Thrift pretty much a lock for Rookie of the Year, but he’s earned himself a decent shot at Angler of the Year as well. “I might screw it up,” Thrift said when asked about his Rookie of the Year status. “That’s awesome – it’s what every rookie dreams about.” Interestingly, the young Thrift was unaware he was even in contention for that award until a friend mentioned it a week ago. When asked about his Angler of the Year chances, Thrift turned modest, saying his current standing is just beginners’ luck. We beg to differ.

Jim dandy … No. 6 pro Jim Moynagh had his toughest day yet today on Lake Norman, but it could have been a lot tougher if fate hadn’t stepped in. Yesterday, Moynagh thought it would take about 27 pounds to make the top-10 cut. He turned out to be really wrong, as numbers were down from day one and it ultimately took less than 25 pounds to make the finals. But without knowing that, Moynagh was gunning for the 27 mark and had enough in the livewell for a two-day total of 26 pounds and change. So he went looking for a 2 1/2-pound kicker and got one hooked with 10 minutes left to go. “I hooked that fish, but I had my drag all messed up,” said Moynagh, who ultimately lost the fish. “I was sick about it. I’d hate for a mistake with my drag to cost me the cut. Turns out I didn’t need the fish – I needed it a lot more today.” Indeed, Moynagh brought in his lightest limit of the week today, clocking in at 9 pounds, 13 ounces, but believe it or not, he’s pretty sure that same fish he lost yesterday was his kicker fish today. “It was the biggest fish I had,” he said. “I caught it with 30 minutes left on the same lure.” Whether or not it was truly the same fish, we’ll never know. But he would sure like to think it was.

Best of the West … Three well-known West Coast pros are enjoying top-10 status this week, reminding the world once again that the western United States is a proven breeding ground for top-notch bass fishermen. Representing California are Michael Bennett in third place and Gabe Bolivar in fifth place, and while No. 9 Jay Yelas currently has a Texas address, he was bred on West Coast lakes and in fact is competing this year in the Wal-Mart FLW Series National Guard Western Division. “Those Western guys are so excited,” Yelas said of the FLW Series’ westward expansion. “When I saw the schedule, I said, `I have got to fish that.'” … While much has been made of the Western anglers’ prowess, what exactly is it that makes them so good? Bolivar has an idea. “Our guys out there are really versatile, and we have a lot of different lakes,” he said. “We’re all into the weird Japanese trick baits, and we all think about fishing in our sleep.” … Not to be left out, the co-angler top 10 also has its own Western representative – Dino Caporuscio, of Coto de Caza, Calif., who finished sixth and took home $6,000.

$25,000: Amount of cash Jancasz won two years ago as co-angler winner of the FLW Tour Championship.

2-3: Jancasz’s margin of victory over Debbi, in pounds and ounces.

300: Amount, in American dollars, that Debbi said a tournament victory might pay in Italy.

10,000: Amount, in American dollars, that Debbi earned today as the second-place co-angler.

9: Spots down the leaderboard that day-two leader Hank Cherry fell by ending day three in 10th.

“I didn’t hear him.” – A nervous Debbi, who at the time was in the lead, in response to well-wishes from fellow co-angler Jess Caraballo, who had just weighed out.

“I’m staying at his house, and I’m going to whoop him this time.” – Nixon, on beating good friend and fellow Arkansas pro George Cochran at this year’s Forrest Wood Cup, to be held in Hot Springs, Ark. Cochran earned $500,000 as the winner the last time the championship was held in Hot Springs.

“I feel like an old man, but I’m not as old as Larry. He’s kicking the butt of all of us old-timers.” – Yelas, on fishing against the young Bennett and “old-timer” Nixon.

“That gets your heart beating real fast every time.” – Bolivar, on the prospect of winning $200,000.

“I’ve been dying to wear that camera on my hat.” – No. 4 Vic Vatalaro regarding the infamous “hat cam” used by Fox Sports Net to capture on-the-water performances by FLW Tour top-10 pros. This is Vatalaro’s first FLW Tour top-10 appearance.

“If determination is all you needed to win, by God, I’d win tomorrow.” – Moynagh, after a tough day three.

Tomorrow’s takeoff is scheduled to take place at 7 a.m. Eastern time at Blythe Landing, located at 15901 NC Highway 73 in Huntersville.