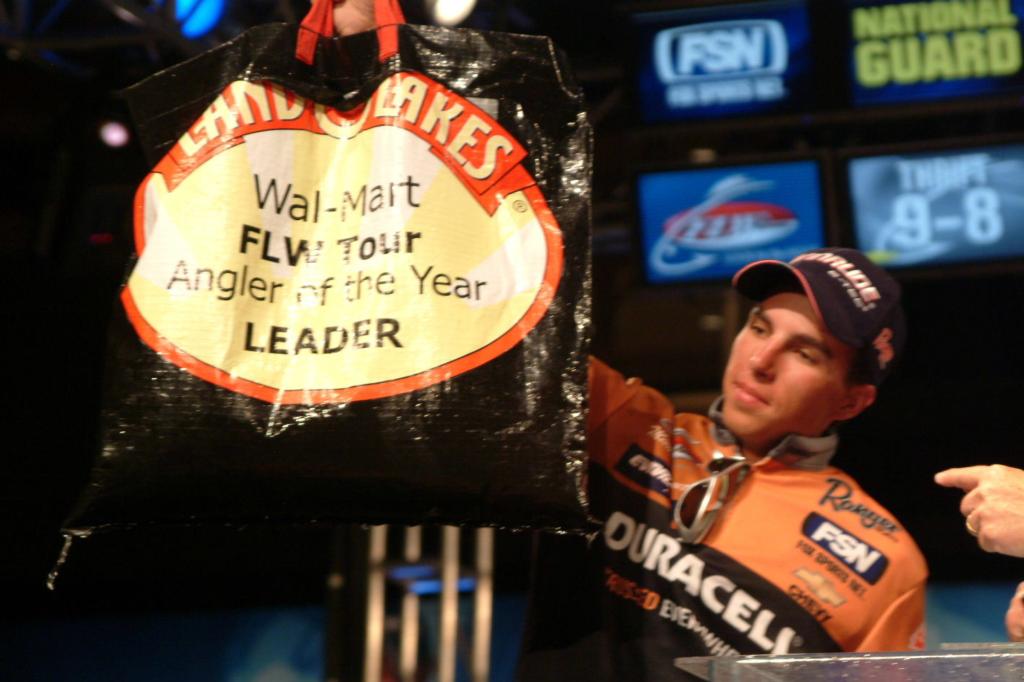 Make way for Michael … There’s a new name atop the Land O’Lakes Angler of the Year points standings, and it’s none other than this week’s No. 7 finisher, Michael Bennett. The 23-year-old California native first appeared on the FLW Tour in 2005, where he scored a top-10 finish on Wheeler Lake and earned a trip to the championship. Last season, he ended the year ranked sixth in the points standings and once again competed in the championship. 2007, though, appears to be his year, as he has not finished outside the top 20 in three tournaments and now sits atop every FLW Tour pro as the points leader. “I’m blessed,” said a very humble Bennett after today’s weigh-in. “God’s looking out for me. I’m fishing the best I’ve ever fished, and I hope that continues.” … Bennett explained his newfound confidence as simply the result of getting some experience under his belt. “I’ve gained enough experience to know how to practice and things along those lines,” he said. As for the upcoming tournament on Beaver Lake, Bennett has not finished well there in the past, but he’s hoping to take some of that hard-earned experience and translate it into a solid finish. “I feel I should do well there,” he said. “But every time (on Beaver Lake), I have one good day and one bad day. I’m going to try to practice and learn how to have two good days.” … Bennett currently leads his fellow top-10 pro Bryan Thrift by 29 points in AOY standings. From there on down the race gets quite a bit tighter, as Thrift is ahead of No. 3 Darrel Robertson by only one point, and Scott Suggs and Tracy Adams trail Robertson by only seven points and are tied themselves with 526 points. Dave Lefebre, who led the race heading into this week’s event, is currently seventh.

Moving on up … Though numbers were down on days two and three compared to a spectacular day one, quite a few pros improved their weight today, with a couple making some pretty big waves. Hank Cherry led the opening round but finished day three in 10th place after weighing in four worth 6-12. Today, though, he brought in a 15-pound, 11-ounce limit to move up to fourth place and earn $40,000. “I said I was going to come out swinging for the fences, and here they are,” he said, adding that he caught his five bass on seven casts. Jay Yelas ended day three in ninth with a four-bass catch of 7-1 but caught the heaviest stringer of the day today – in fact, it was the heaviest stringer of the tournament. Yelas’ limit weighing 16 pounds, 6 ounces moved him all the way up to second place and earned him $75,000 in the process. While several reasons for a slower bite have been tossed around the past couple of days, Yelas blamed it on angler error on day three. “I only caught five bass all day,” he said. “I was fishing a big-fish lure, but I did the exact same thing yesterday, and I fished the exact same areas. Probably the biggest difference today is I adjusted my timing. They were done biting in the first hour, and I caught my fifth one at noon. It was the same spots and the same lures, but I adjusted my rotation.”

Keep those candles lit … It’s common for top-10 pros to be joined by their families to cheer them on in their moment of glory. It’s not common, however, for pros to be cheered on by their 91-year-old grandmothers, a treat No. 3 pro Vic Vatalaro enjoyed today. Angeline Vatalaro made the trek from Akron, Ohio, to watch her grandson during his first FLW Tour top-10 appearance. This may be his first trip to the big FLW Tour grand stage, but he’s no stranger to top-10 finishes in other trails, including the Stren Series, and Mrs. Vatalaro is no stranger to cheering him on. “He’s never won this much!” she said of Vic’s $50,000 payday. “I had a candle lit every day while he was here for God to help him.” … Making this week’s tournament even cooler for the Vatalaro clan is that Friday – the day that Vic qualified for his first-ever FLW Tour final round – was his wife’s birthday. “She said, `Get in the top 10 for me,'” Vic said. Well done – and happy birthday to your wife!

Two takeoffs … Scott Suggs had a fairly tough day on Lake Norman today, as he caught 9 pounds to fall from second to fifth. But that fall could have been a lot more bruising had Suggs not had the good sense to take a second and calm himself after what could only be described as a frustrating morning. “I pulled in on a key area this morning, and I had the camera boats around me,” Suggs explained. “I pitched in this one stump and missed a fish three times in a row. The fourth time, I hooked it, and it pulled off.” So Suggs moved a bit farther down the bank to try his luck there. “I set the hook and broke my line,” he said. “So I went down a little farther, and once again, I set the hook and broke him off. At this point, I didn’t even have a fish yet.” So he put his rods back together and took a breather. “I sat down and talked to everybody,” he said. “We visited. I sat flat on my haunches and talked to them. I said, `I need to cool off and start fishing.'” Only someone with a very good sense of humor could have survived what happened next. “The very next bite, I broke it off,” he said. “I held my composure and never lost another fish.” Suggs ultimately caught a limit and earned $30,000 for his fifth-place finish, a check that ought to soothe any wound. “Everybody thinks you’ve got to go 90 mph,” he said. “We had a new takeoff at 9:15.”

Big bait, little fish … Suggs wasn’t the only top-10 pro having a wacky day. Rookie Thrift also had a tough go of it, as he ended up catching only one keeper that weighed 1 pound, 3 ounces to finish 10th. While gunning for the big bite obviously worked for Yelas, it may have burned Thrift, though he ultimately wound up with a good story to tell. “I was throwing a 5-inch swimbait across a little rocky point,” Thrift said. “I saw a swirl behind the bait and then it went under. I said, `Hey! I caught one!’ I got it in, and it was not even big enough to keep!” That’s right – Thrift caught a 13 1/2-inch fish on a 5-inch bait. “The front hook was in its mouth, and the tail (of the bait) came down 3/4 of the length of its body,” he said. Hey, that fish is no different than a lot of bass fishermen – it’s dreaming big.

Big Bass Charlotte … Larry Nixon wasn’t the only winner at the Cabarrus Arena today. Four Fox Charlotte viewers earned the chance to fish with a pro today on Lake Norman for the Big Bass Charlotte contest. Taking home the $500 top prize was local Toby Garmon, who fished today with pro angler Richard Lowitzki. The pair brought in two bass that weighed 3 pounds, 8 ounces to finish best of the four qualifiers. The second through fourth place finishers each earned a $50 Wal-Mart gift card, and a $5,000 donation was made in Garmon’s name to the FishAmerica Foundation. … Garmon is no fishing-tournament novice, as he admitted on stage to having competed in a few before. But fishing with a big-name pro certainly got his juices flowing. “It was awesome getting to fish with Rich,” Garmon said. “He’s an awesome person and a pretty good fisherman.” Lowitzki too sounded like he had a pretty good time out there. “I’m blessed to be a part of this,” he said. “He told me right off that he wanted to win this one.” Who knows, maybe Garmon is the next FLW superstar. He did say he was thinking about quitting his job … 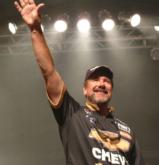 3-9: Nixon’s margin of victory over Yelas, in pounds and ounces.

31: Number of years Nixon has been fishing tournaments.

9: Number of five-bass limits caught today by the top-10 pros.

139: Number of miles driven the last two days by Thrift to catch his bass.

3: Number of top-10 pros in their first FLW Tour final round: Vatalaro, Cherry and Gabe Bolivar.

“If I was a betting man, I’d probably have to bet on Larry.” – No. 2 Yelas, while waiting to find out if the Arkansas legend was going to beat him. Yelas would have won the bet, at least.

“When you get older, they all get sweeter.” – Nixon, on winning tournaments while in the retirement age.

“I’m in the mid-range group, and I’m scared to death of the ones behind us.” – Suggs, continuing on the topic of age, referring to fishing against young guns like Bennett, Thrift and Bolivar.

“She didn’t say anything about size.” – Suggs, whose wife had said she hoped he caught a limit. He did, but it weighed only 9 pounds.

“Every now and then an old fox can still get ’em.” – Nixon, again on the topic of age. Hey, he’s not that old.