Thrift charges out of gate at Forrest Wood Cup 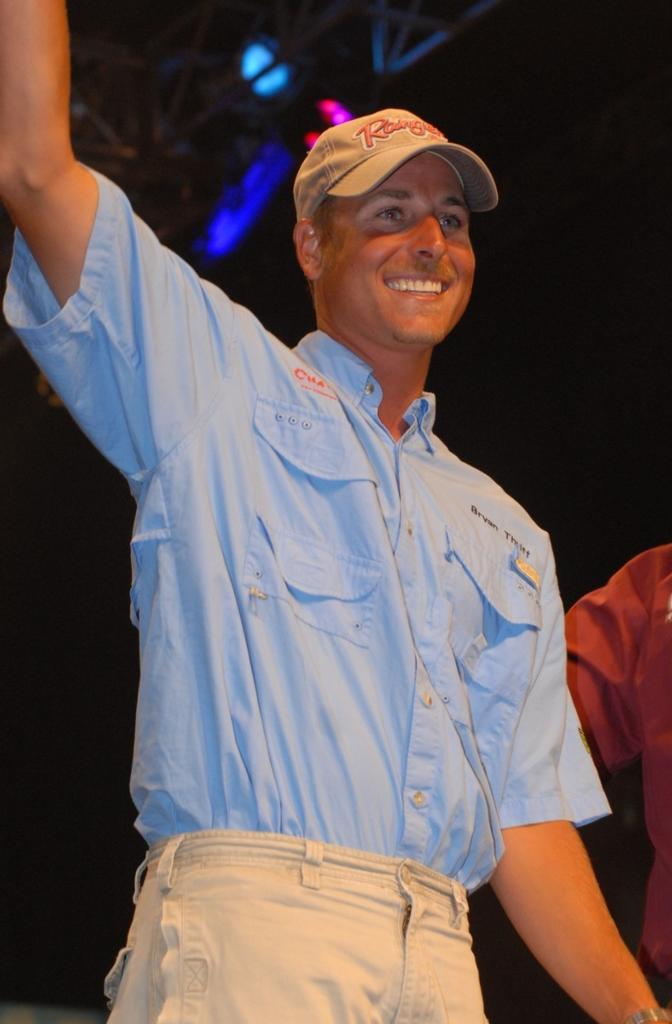 HOT SPRINGS, Ark. – As of 7 o’clock this morning, all of the pretournament rhetoric, smoke screening and unintentional sandbagging came to an abrupt end as the 2007 Forrest Wood Cup qualifiers took to Lake Ouachita and did what they do best: catch bass.

With temperatures in the mid-90s and a thick layer of humidity slithering through the Ouachita Mountain valley, it was classic summertime fishing at its finest.

If you have ever wondered how the best pros in the world deal with such conditions, this event is a good lesson. Simply put: With a million bucks on the line, no one is holding back.

Despite a lot of pretournament moaning, 34 limits passed through the scales in the Pro Division. As expected, the local contingent represented Arkansas well, but interestingly, there are a few California addresses in the top 10, too.

The Wal-Mart FLW Tour’s 2007 Gain Rookie of the Year, Bryan Thrift of Shelby, N.C., set the bar early in the weigh-in with a five-bass limit weighing 15 pounds, 7 ounces, which held up as the day-one lead.

Thrift made it clear that his catch was a total surprise. He only caught six keepers during the day, but a majority of them were larger than he expected.

“I’ve had several 8- to 10-pound days in practice, but nothing like this,” Thrift said of his day-one catch. “Some of those 2-pounders turned into 3-pounders, and I got one about 6 pounds to go with them.”

Thift said he fished the lake “from one end to another,” spending only a few minutes at each spot.

“I’ve got a shallow pattern that I’m trying to make last as long as I can in the mornings,” he said. “I’m running spot to spot and only making four or five casts per spot. My morning deal has been better for quality, but today that kind of changed. I caught three shallow and then moved out deep where I caught the 6-pounder.”

When Thrift works his deep-water pattern, he says he does fish a little longer – 15 to 20 minutes per spot – but he’s still trying not to stay in one place too long.

“I’m just trying to keep moving and not get stale,” he added. “I seem to fish better when I’m on the move.”

He did note that both his shallow and deep patterns were grass-oriented patterns.

Though Thrift is responsible for introducing the bass-fishing world the ChatterBait, he did confirm that he is not using one here.

“Coming here, my plan was to catch them stroking the ChatterBait through the deep grass,” he said. “It did work a couple of days, but with it being so hot, those fish are not reacting to it right now. I’m having to drag plastics around to get my bites.”

Folgers pro Scott Suggs of Bryant, Ark., is one of the hands-down favorites this week

at Ouachita, and he showed why today with a five-bass limit weighing 14 pounds, 14 ounces for second place.

As further proof of the number of fish he is on, his co-angler, David Hudson of Jasper, Ala., is leading the Co-angler Division with 11 pounds, 9 ounces.

Despite the amount of money on the line, Suggs was very candid about his pattern.

“I’m spending three-quarters of the day in deep-standing timber,” he said. “It’s actually where grass and timber kind of come together, but I’m focusing mostly on suspended fish in the standing trees.”

As for Suggs’ chances at the million dollars from this point in time, he’s not calling his shots yet, but he does seem to exude a great deal of confidence in being dialed in on exactly what his fish are doing.

“I’m fishing for all I can get tomorrow,” he said. “I’m not going to mess with that conservation game and play with chances of missing the cut. I’ve done that and gotten burned in the past. I would stop at 10 or 11 pounds, should I catch that tomorrow, but I’m not going to be playing around with the math on anything less.”

M&M’s pro John Sappington of Willard, Mo., holds down the third-place position after day one with 13 pounds, 13 ounces.

Sappington, the 2002 championship winner on the FLW Tour, revealed that he worked three different patterns to catch 10 keepers today.

One is a shallow grass pattern that has produced small fish for him and is “going away,” due to the rapidly falling water levels.

The other is a deep grass pattern, but the last one has a familiar ring to Suggs’ primary pattern in that Sappington mentioned the words “standing timber.”

“I’ve got nine rods out on the deck, and I’m fishing a lot of different baits on these fish,” he said. “I don’t know that I’ve quite got them dialed in just yet; I feel like I’m playing catch-up to them every day. Each day I have to adjust and change up lures or areas to get them to bite.”

Rusty Salewske of Alpine, Calif., has started the event in fourth place with

Although Salewske did not want to reveal the finer details of his pattern, it is somewhat obvious that his Western fishing roots are paying off.

“I feel pretty comfortable on this kind of water – deep and clear,” he said. “It’s not like when I go to Okeechobee and everyone’s catching 9-pounders, and I don’t know what to do. This kind of water fits me better.”

Salewske did say he is fishing down to 30 feet of water and that he’s not in the grass, but that deep grass does need to be close by to make his pattern work.

“I’ve got one good spot that produced most of my fish,” he said. “I caught my limit by 10:30 and then backed out of the area a bit. Hopefully that one spot will hold up. I do have other areas that I did not fish today, but this one place has all the right ingredients.”

As a former championship winner on the FLW Tour, Darrel Robertson of Jay, Okla., is no stranger to winning big-money tournaments, and he made an early move on a second title today with five bass weighing 12 pounds, 10 ounces.

“This lake has plenty of bass in it,” he said. “My thoughts on it are that this time of year, they feed almost exclusively at night. I feel like there are plenty of bass down there looking at my lures, but they just will not bite.”

“I’ve got about eight little key spots that I’m fishing with a worm,” he said. “Some are just grass, and some have grass and timber. I’ll fish each one for about 20 minutes, then move on to the next one, and I just rotate them like that all day.”

Rounding out the top 10 pros in the 2007 Forrest Wood Cup after day one: