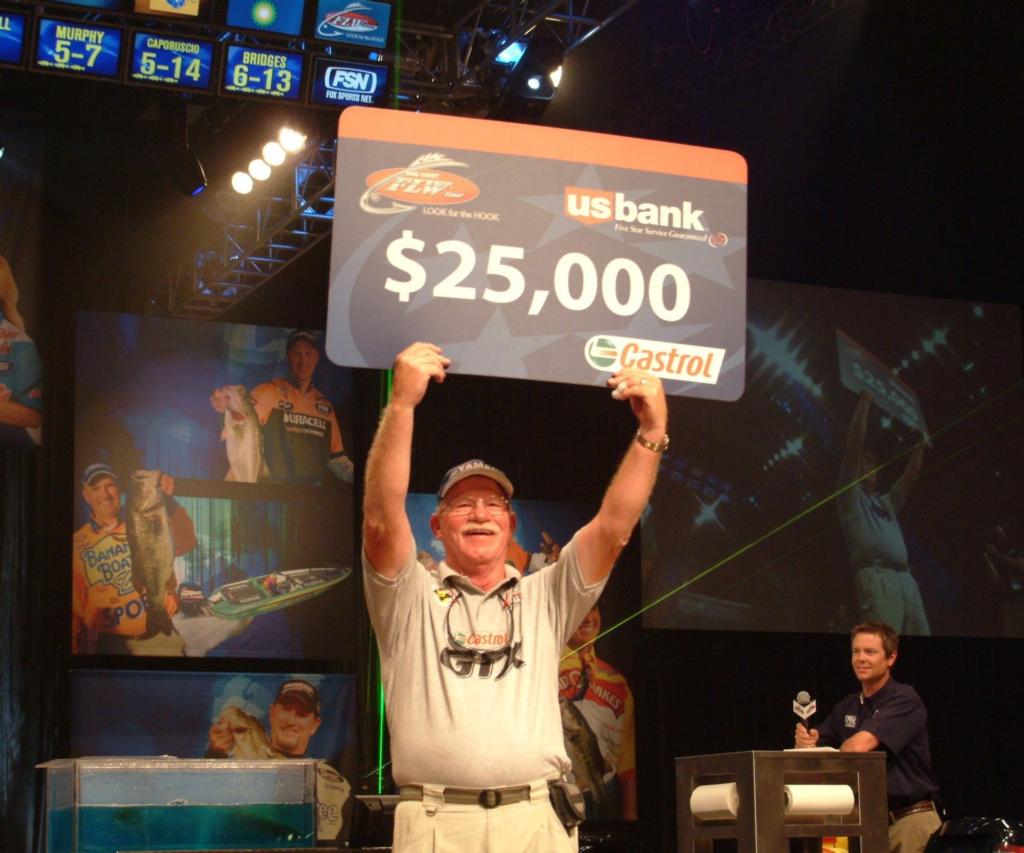 HOT SPRINGS, Ark. – On his 66th birthday, Pete Bridges bested 80 other co-anglers in winning the richest championship in the history of professional bass fishing. It wasn’t worth a $1 million like it will be on the pro side, but the mayor of Tallapoosa, Ga., couldn’t be any happier.

Under suffocating heat, Bridges won the Forrest Wood Cup by catching four bass that weighed 6 pounds, 13 ounces. While that doesn’t sound like an impressive catch, that weight would be good enough for third place in the Pro Division on day three. Needless to say, the fishing Saturday on Lake Ouachita was tough.

“I had two fish prior to my pro having any fish,” said Bridges, who was partnered with David Dudley on day three.

The two started the day by fishing a rocky point in 20 feet of water. After that proved unsuccessful for Dudley, he moved upriver and tried throwing a crankbait.

“He seems to sense they’re around,” Bridges said of Dudley. “He talks to them.”

Their last move was to a deep, grassy area, where Bridges caught his final two keepers. The first two fish bit a 10-inch Zoom Old Monster in watermelon-red color. His last two bass were caught on a 10-inch ribbontail worm in plum color. Earlier in the week he used a swimming Senko when fishing shallow water.

“I gave David all the leftover baits I had. I think he liked how they were hitting the worms.” 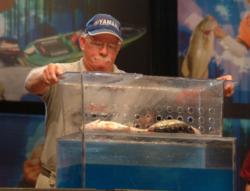 The 2007 Forrest Wood Cup was Bridges’ third championship appearance. He has six top-10 finishes to his name, but this was his first victory and it was worth $25,000.

“I like having the bragging rights, but the best part is that I’m taking this check home to my wife. She sacrifices a lot to let me go fishing.

“I’d also like to thank Gary Yamamoto. He’s my practice partner, and he trained me. He’s taught me everything I know.” 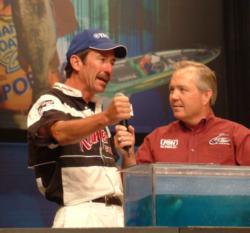 Caporuscio caught his bass with a 5-inch Roboworm in Aaron’s Magic color. He Texas-rigged the bait and drug it deep along the grass.

On Saturday, he fished with Pedigree pro Greg Pugh on the southeast side of the lake in 25 to 30 feet of water.

“On my last cast of the day, I caught a 3-pounder. I just never gave up, it was great.”

For his efforts, the Coto de Caza, Calif., native earned $10,000. Next up is a visit to the Columbia River for the third Wal-Mart FLW Series National Guard Western Division event of the year. Caporuscio fishes that circuit as a professional. 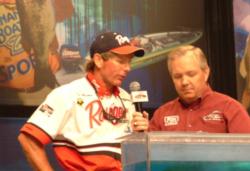 This was Murphy’s fourth top-10 finish of the season. He opened the year with a fifth-place performance on Lake Travis. At the Wal-Mart FLW Tour event on the Potomac River, Murphy took ninth. At the Chevy Open on Lake Erie, he caught a five-bass limit on the final day of competition that weighed 18 pounds, 13 ounces. That was good enough for his first victory and $40,000.

Fishing with pro John Devere on day three of the Forrest Wood Cup, Murphy caught his three bass on three different baits. He used a topwater, a finesse worm and a Senko.

The other mayor in the top 10 was Doug Caldwell, who oversees the small town of Kane, Pa. Caldwell finished fourth with three bass for 5 pounds, 1 ounce, worth $8,000. 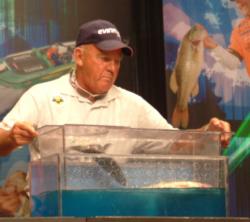 Caldwell had the privilege of fishing with Dave Andrews, Scott Suggs and Clark Wendlandt during the week.

Partnered with Suggs on day two, Caldwell caught a limit weighing 10 pounds, 12 ounces, the second heaviest of the tournament for the co-anglers.

“That’s just the way it is,” said a disappointed Hudson, who led each of the first two days of competition. “My plan for the day was to swing for the fence with a 10-inch worm and a big jig. I had 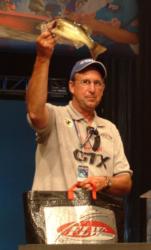 only caught one small fish on the worm, so I switched to a drop-shot with about an hour left in the day, and I caught two pretty quick. Then I said to myself, `Why didn’t I do this all day?’ For whatever reason, the fish just didn’t want the big baits today, and I don’t know why.”

In his career, the Jasper, Ala., native has 15 top-10 tour-level finishes. Without a doubt, he is one of the most accomplished co-anglers in the sport. He has not, however, won a tour-level event. His best chance may be at his home waters of Lewis Smith Lake, as the FLW Tour will visit Jasper April 3-6.

Rounding out the top 10 co-anglers in the 2007 Forrest Wood Cup: