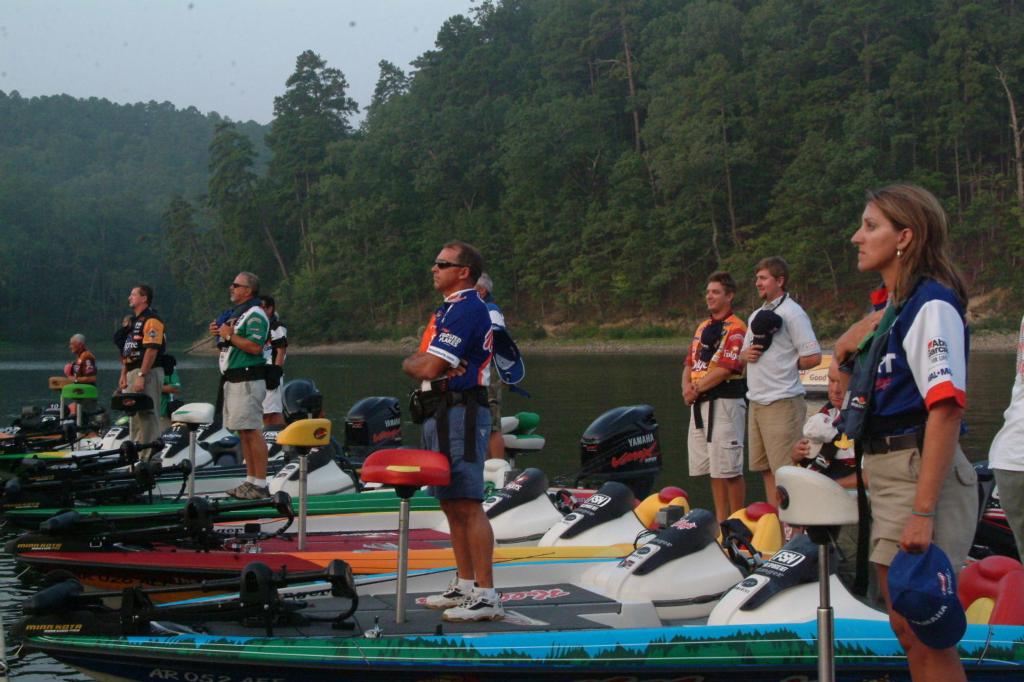 HOT SPRINGS, Ark. – Ten of the luckiest men alive set forth from Brady Mountain Resort on Lake Ouachita this morning in pursuit of bass fishing’s richest prize – $1 million. All 10 pro finalists are Ranger qualified, meaning each of them has a 1 in 10 chance of leaving Hot Springs tomorrow a millionaire.

But to do that, they must first get through today and tomorrow, and this morning broke forth hot and muggy with a bevy of boats idling around the marina, ready to follow the top-10 pros to their Lake Ouachita fishing holes.

The most popular target by far was local pro Scott Suggs, who ended the opening round in second with a two-day total of 26 pounds, 8 ounces. Judging by the size of the wake left behind by Suggs, his camera boat and his string of followers, he is going to be dealing with quite a bit of company today.

“I know how many were around me yesterday, and there’s going to be a lot more today,” Suggs said. “Even though that’s our homeboys, they get up too close, and they want to idle over my stuff. None of that helps.”

Suggs and his fellow top-10 pros have it tough enough without dealing with local boat traffic – they’re fighting extreme heat and humidity all day long, and the bite on Ouachita this week has been more difficult than expected.

“I never know on his deal because I’m fishing suspended fish,” Suggs said when asked about what he expected today. “Each day is a little different; they reposition every day. It’s like looking for a needle in a haystack.”

Clark Wendlandt sat three spots behind Suggs after the opening round, ending day two in fifth with 24 pounds, 4 ounces over the first two days. Wendlandt may be one of FLW Outdoors’ more popular anglers, but he will not be dealing with near the on-the-water attention today that Suggs will. Like Suggs, though, he left the marina on day three not really sure what awaited him on Lake Ouachita.

“It’s tough,” Wendlandt said. “I don’t know what to expect. I’m hoping for the best.”

As a veteran angler who’s won major events and earned not one but two Angler of the Year titles, Wendlandt certainly knows how to compete under pressure. But his attitude about going out for $1 million is remarkable, to say the least.

“It doesn’t feel any different,” he said. “I know what’s at stake, but it’s still a bass tournament.”

The top 10 pros and co-anglers will weigh in their day-three catches today beginning at 5 p.m. at Summit Arena, located at 134 Convention Blvd. in Hot Springs. Co-angler competition concludes today, with David Hudson of Jasper, Ala., leading that division after the opening round with a combined catch of 18 pounds, 7 ounces. The winning co-angler could earn as much as $50,000 if contingency guidelines are met.

For those unable to attend in person, FLWOutdoors.com brings all the action to your computer screen via FLW Live, where fans can follow the weigh-in in real time.