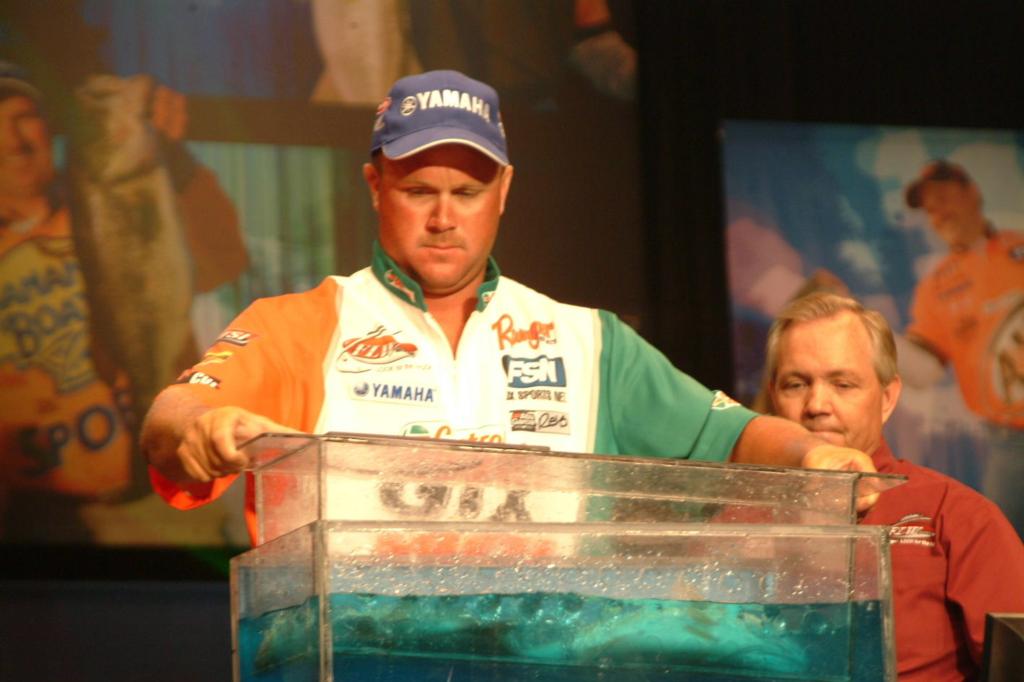 David Dudley is tops on the FLW Outdoors all-time money list, and he is joined in the final round this week by the No. 2 and No. 3 anglers on that list - Darrel Robertson and Clark Wendlandt. Photo by Jennifer Simmons. Angler: David Dudley.
August 4, 2007 • Jennifer Simmons • Tackle Warehouse Pro Circuit

Best of the best … One thing is for certain, someone is going to walk out of here tomorrow $1 million richer. With the sport’s richest payout ever on the line, it is ironic that FLW Outdoors’ three biggest moneymakers are in the top 10, and those three are the only anglers whose combined career earnings have exceeded the $1 million mark. David Dudley is first on the FLW Outdoors all-time money list with earnings in excess of $2 million, and he will head out on the final day of the Forrest Wood Cup tomorrow in boat No. 3. Darrel Robertson is behind Dudley on both the money list and today’s leaderboard, as today’s No. 4 pro has career earnings of more than $1.4 million. Clark Wendlandt ended today’s competition in seventh and is third on the FLW Outdoors all-time money list with earnings of more than $1.2 million. “It’s awesome to know that I’ve got a chance to win a million and I only have to beat nine people,” Dudley said. Robertson concurred, saying, “I’d like to cross another million-dollar line. That’s the reason I worked so hard to get here.” … In contrast, leader Scott Suggs has earned only $182,180 in his FLW career, so if he wins the million tomorrow, he still won’t topple Dudley, Robertson or Wendlandt on the money list. Of the top-10 finalists, Jack Wade has the smallest career-earnings total at $72,056.

Working for a million … To say the tough bite got tougher today on Lake Ouachita would be a laughable understatement. Zero five-bass limits were caught on the co-angler side and only one was brought in by a pro, and that was by Suggs. The local pro was also the only angler to hit the double-digit mark in weight, as his 11-pound day-three stringer tops his nearest competition by 4 pounds, 1 ounce. One pro and one co-angler failed to bring in any fish at all. “This was one of the toughest days I’ve ever fished,” said No. 9 Anthony Gagliardi. Yesterday’s leader Wade was the lone pro who went belly-up today, and he said on stage, “Everybody that fishes a lot knows what a humbling sport this is.” With $1 million on the line and with such a solid lead by a local, does anyone have what it takes to topple Suggs? Joked No. 2 Greg Pugh, “Scott Suggs told me this morning to take it easy on him, so I held back a little bit.” Pugh caught a pair of bass weighing 6 pounds, 15 ounces to land in second. On day one, that weight would have had him halfway down the field in 42nd. The bigger they are, the harder they fall.

Friendly fire … Of the 81 pros who qualified for this event, it’s a mighty coincidence that both Wendlandt and Mike Surman made it to the top 10. After all, they’re often roommates on the road, their families are close and they are super-tight themselves. With $1 million on the line, how awkward is it to compete against your best friend? After all, Surman and Wendlandt don’t have a Craig Powers/Koby Kreiger-type arrangement to split all earnings down the middle. “It makes me excited,” Surman said. “He gave me a bait this week that helped me, and I gave him a bait that’s helping him. He’s already wanting some of his baits back, but he needs more of mine.” Responded Wendlandt, “I don’t want my baits back.” All joking aside, there is no doubt the two have each other to thank for making it to the final rounds. “We’ve kind of helped each other,” Wendlandt said. “It’s been good. If I don’t win, I hope he does, but I want to win.”

Birthday boys … Co-angler champ Pete Bridges celebrated his 66th birthday today and got one of the best gifts ever – a $25,000 check. That sure beats a necktie. Also celebrating today is Gagliardi, who turned 30 today. It must be something to hit a milestone the same week you find yourself among the 10 people who are competing for the sport’s first $1 million prize. “Everybody says 30 is over the hill, but they didn’t tell me how steep it was on the other side,” Gagliardi quipped. As for Bridges, his big birthday payday isn’t likely to be going toward new stuff for himself. In a sweet gesture, he said he wanted to give it all to his wife. “My real trophy’s at home, and that’s my wife,” he said. All together now: awwwww.

A pair of mayors … Though Bridges may be $25,000 richer after his Forrest Wood Cup co-angler win, that money may be just pocket change to him. After all, he’s now retired after a successful – and reportedly lucrative – career manufacturing golf clubs. “I started the business in 1983, manufacturing golf clubs and distributing them for different companies,” he said. “My son runs it now. I’m too old to run it. I’d rather fish.” … In addition to fishing, Bridges is also the mayor of Tallapoosa, Ga., and in a weird coincidence, he was joined in the co-angler final round by another small-town mayor, Doug Caldwell, the mayor of Kane, Pa., and this week’s No. 4 co-angler. “There are probably more people here than there are in my town,” deadpanned Caldwell of the big and boisterous crowd that populated Summit Arena this afternoon. Said Bridges of the double-mayor final-round, “Isn’t that amazing? We must not do anything.” Caldwell joked that he put his town on autopilot in his absence; Bridges left his in the capable hands of his mayor pro tem and city manager.

Girl power … Tomorrow’s million-dollar winner won’t be the only competitor making history this week. With a ninth-place finish on the co-angler side, Karyn Sanchez wrote her name in the books as the first woman ever to make the final round at the Forrest Wood Cup. She is also the only female who qualified this year at all. Bass fishing has seen a remarkable upswing in diversity over the past few years, and Sanchez realized the dream of many female anglers when she made it to the prestigious Forrest Wood Cup finals. “Wal-Mart and FLW Outdoors have made it open to everyone,” said Sanchez, who is a member of the Wal-Mart fishing team. “There are a lot of women on tour, and there will be more in years to come. I’m glad to be here representing those ladies.” Sanchez added that she plans to return next season as a co-angler.

The next generation … Seventy youth anglers stood on the big stage today in Summit Arena at the close of the first day of The Bass Federation’s National Guard Junior World Championship. There are two age brackets – 11 to 14 and 15 to 18 – and one representative from each bracket went out in a boat today on Lake Hamilton with a Wal-Mart FLW Tour pro. Six anglers from each age division advanced to tomorrow’s final day, when they will again go out with a tour pro in search of scholarships and sponsorship prizes. While today’s weigh-in was held at the Fish Hatchery on Lake Hamilton, the lucky 12 finalists will enjoy the experience of weighing in their fish tomorrow in front of the big arena crowds. Thirty-five states are represented, and the states that the 12 finalists call home will receive grants from the National Guard for their TBF youth program. Currently, Shane Lehew of North Carolina leads the 15 to 18 age bracket, and Dylan Peppers is tops in the 11 to 14 group with one day of competition remaining.

6,250: Value, in dollars, of each of the four bass brought in by Bridges on today’s final co-angler day.

“After seven or eight days of daylight-to-dark (fishing), we’re worn out, but when you’re fishing for a million … we’ll sleep next week.” – Surman, putting in perspective the long hours spent in the August heat in pursuit of the big bucks.

“He’s going downhill every day.” – Bridges, when told of incoming leader Hudson’s day-one and day-two weights, which totaled 11-9 and 6-14, respectively.

“You’ve got a lot of boat traffic and a lot of people spectating, which is a good thing, because it’s the only way to learn.” – Dudley, offering a rare positive spin on the boat traffic chasing anglers, particularly Suggs, today.

“I told her if she didn’t put me on fish, I was going to throw her overboard. I was begging her to help me.” – Surman, on trying to milk his day-three co-angler partner Sanchez for anything that would help him find fish. He caught two today and she caught one.