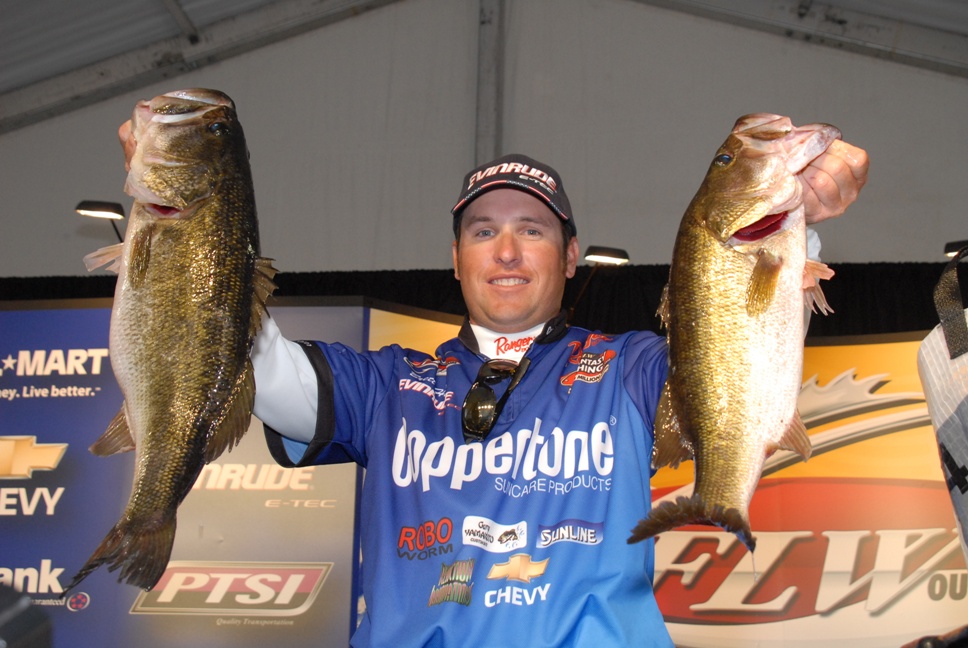 KISSIMMEE, Fla. – Three limits over 20 pounds … 65 limits weighed in on the pro side … a top-10 cut weight of nearly 15 pounds for the pros: That’s how things shake out after day one of the Wal-Mart FLW Tour season opener on Lake Toho.

Not too bad for a central Florida lake that got wracked by a wicked cold front Wednesday, which dropped water temperatures at least 10 degrees overnight. Fishing fans, bystanders, pundits and participants were all a little surprised at how well the Toho-Kissimmee lakes fished on day one.

But none were more surprised than Brett Hite of Phoenix, who sacked up 22 pounds, 6 ounces to take the tournament lead.

“I figured I could catch 12 to 15 pounds pretty easy,” Hite said. “But I had no idea my areas had that kind of quality fish in them. A lot of times we tournament pros do not really know what our areas hold until 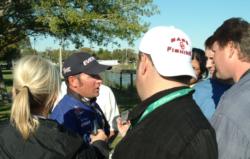 In fact, when the day started, Hite did not know which of his two areas to go to first.

He caught three fish from his first spot, then switched to the second spot and, in his words, “just started catching them” to end the day with 10 keepers.

Hite’s limit was anchored by an 8-13 lunker.

He said his two areas on Kissimmee look identical in terms of vegetation, water clarity and water depth. Also, he’s not the only one that has found these fish.

“There are probably six or seven other boats around me, but I’m doing something a little different,” he added. “These are feeding fish; they’re hitting a reaction type bait.”

Shad Schenck of Waynetown, Ind., holds down the second-place spot with 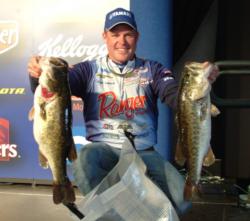 In all, Schenck boated eight keepers from the waters of Lake Kissimmee. He has about 20 small spots he’s visiting, but his presentation is slow and precise.

“What’s helped me the most here is I purposely practiced for cold-front conditions,” he said. “Even though it was warmer during practice and there were other ways to catch bass, I really ignored those patterns in practice in anticipation of that cold front. And it paid off today. I actually hope it stays cold.” 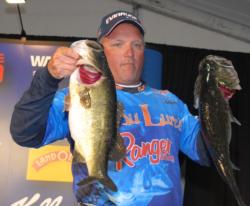 Sherry noted that he has a shallow-water numbers game in Kissimmee and a deeper-water quality game in Toho. He boated a total of eight keepers today: three from Toho and five from Kissimmee.

“I started the day on Toho,” Sherry said. “I caught two good ones up here and then decided to lock down into Kissimmee, where I can catch numbers of fish shallow. Once I finished out my limit down there, I returned to my deeper spot up here and culled up once more with another good fish.”

Sherry said he plans to stay with his two-lake game plan tomorrow.

Andy Morgan of Dayton, Tenn., stuck with a Lake Toho plan today to sack up 18 pounds, 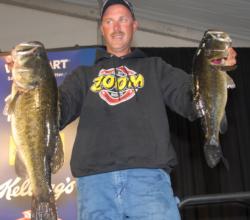 “Truthfully, I think the better bite is in Kissimmee,” Morgan said. “But I had a late boat draw this morning, so I made a deal with myself that if I caught one fish in the first hour up here on Toho, I’d stay. I caught one in the first hour, then another, so I just decided to stick it out up here.”

In all, Morgan boated six keepers, and he has a hard decision to make in the morning.

“I’ve got an early boat number in the morning, so I’m tempted to go down there (Kissimmee),” he added. “But I didn’t do too bad up here today, so I don’t know what I’m going to do.” 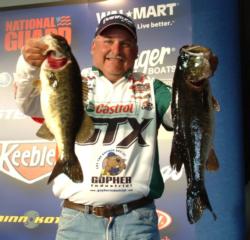 Carl Svebek of Siloam Springs, Ark., holds down the fifth-place position after day one with five bass for 17 pounds, 10 ounces.

He’s committed to Toho, and it may come as no surprised that he’s fishing his namesake Sweebo worm by Gambler – slowly.

“I’m actually rotating a lot of water and fishing a lot of spots, but once I get to a particular spot in the Kissimmee grass, I’m really slowing down and making very particular casts – long casts – letting it settle for a minute, then I reel back in and make another cast. I’m only interested in the first part of the cast; that’s when I get most of the bites.”

Rounding out the top 10 pros in the FLW Tour event on Lake Toho after day one:

Randy Hadden of Jacksonville, Fla., caught the Snickers Big Bass in the Pro Division on day

one weighing 11 pounds, 9 ounces. He caught the behemoth on a 7-inch Berkley Power worm (junebug) that he received as a free sample during registration.

Bryan Talmadge of Pell City, Ala., leads the Co-angler Division of the FLW Tour event on Toho after day one with five bass for 13 pounds, 7 ounces.

Talmadge fished with pro Lendell Martin and caught a total of eight keepers behind him on Lake Toho.

He said: “I fished two baits made by Open Water Bait Company: an Alpha Hawg, which is a creature-style flipping bait, and a Huzzie, which is a finesse-style worm. I used both of those plastics around grass in Toho.”

James Green of Lincoln, Ala., is in second place with four bass for 11 pounds, 3 ounces.

Gil Phillips of Alba, Texas, holds down the fifth position with 10 pounds.

Rounding out the top 10 co-anglers in the FLW Tour event on Lake Toho after day one:

Nathan Webber of Boone, N.C., caught the Snickers Big Bass in the Co-angler Division on day one weighing 6 pounds, 11 ounces.

Day two of the FLW Tour on Lake Toho will begin Friday at 7 a.m. at the Lakefront Park located at 101 Lake Shore Blvd. in Kissimmee.