Be afraid of Hites 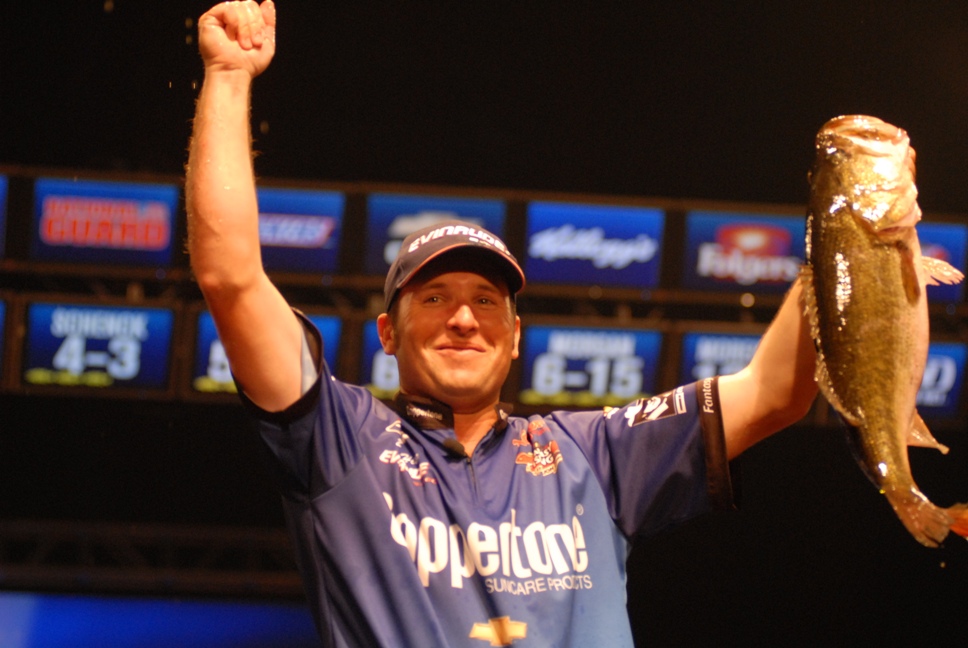 Afraid of Hites? You should be. Brett Hite sacks up 25-2 on day three of the FLW Tour event on Lake Toho to take a commanding by nearly 13 pounds. Photo by Rob Newell. Angler: Brett Hite.
March 1, 2008 • Rob Newell • Tackle Warehouse Pro Circuit

KISSIMMEE, Fla. – When Brett Hite of Phoenix left the dock this morning for day three of the Wal-Mart FLW Tour event on Lake Toho, he had an unmistakable air of calm about him.

In his mind’s eye, he could see the conditions lining up in his favor: warmer water, less boats, less wind and more water visibility for “reading” the lanes in the vegetation where big bass lurk.

When he returned to the weigh-in stage this afternoon with a limit of bass weighing 25 pounds, 2 ounces to take a commanding lead in the FLW Tour season opener, his calmness never faltered.

“I stayed calm and relaxed all day, and everything went perfect,” Hite said. “Each day these fish move a little bit, and it takes me a while to contact them. When I got down to Kissimmee and saw how few boats were in my primary area, I immediately relaxed and just went fishing.

“Without so many boats around, I had freedom of movement and I could fish like I needed to, which made a big difference in relocating this group of bass. Also, the water had cleared and the surface was calm, so I could see the lanes of hydrilla I needed to be targeting. I saw two of the big ones I caught come up and eat the bait – it was unreal.”

With nearly a 13-pound lead and one more day to go, Hite was a little bit more detailed about his key lure.

“I’m throwing a Phenix vibrating jig; it’s like a ChatterBait,” he said. “It’s got a green-pumpkin skirt and black blade. I’m using two trailers: a Yamamoto 6-inch twin-tail and a swimming Senko. It looks like a shiner or baitfish kicking around down there.

“I really believe the fish are dialed in on that vibration, too,” he added. “Spencer Shuffield fished the same areas with me as my co-angler today, and he’s a great fisherman. He was throwing weightless flukes and stuff like that – it looks perfect for that kind of fishing – but the fish are just eating that vibrating jig.”

As for tomorrow, Hite says he plans to change nothing – and rightly so.

Just a mere 12 pounds, 13 ounces behind Hite is Dan Morehead of Paducah, Ky., 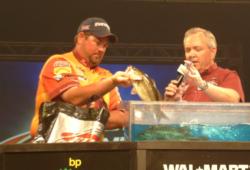 “I’d like to sit here and tell you that I’m going to go out tomorrow and throw giant swimbaits for a big bag or something like that,” Morehead laughed. “But the truth is I’m going to go out and try to catch another 13 pounds, hopefully finish second and take my money and points and get the heck out of Florida.”

“For the first time in my career, I’m honestly going to fish for second place and be happy if I end up there,” he added with a chuckle. 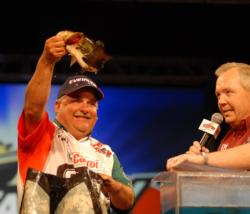 Svebek stayed with his “swacky rig” – a Gambler Sweebo worm fished wacky style – in the Kissimmee grass in Toho.

“I caught a lot more keepers today than I have been catching,” he said. “The last two days it’s taken me till about 10:30 to get a limit. Today, I had limit in 45 minutes.”

“I’ve got a huge hill to climb now, so I’m just going to go out and treat it like a fun day of fishing and do my thing,” he said. “I’m going to play the percentages. With as many fish as I’m catching, I’d have to think I’m going to get it around a big one at some point.

“If I do anything different tomorrow, it would be to throw a toad for a better bite, but my initial plan is to stick with the wacky rig.”

Shinichi Fukae of Mineola, Texas, holds down the fourth spot with five bass for

Fukae is fishing a Yamamoto prototype worm that he describes as being about 6 inches long and having a straight tail. The BP pro is throwing the small worm on a light Carolina rig with a 3/16-ounce weight tied to 16-pound-test Yozuri line.

He, too, plans to change nothing about the way he is fishing on the final day. 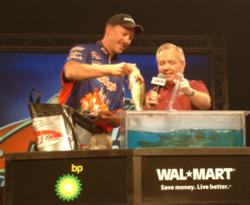 “I’m still pretty speechless,” said Morgan with a laugh while looking at his weight compared to Hite’s. “I really don’t know what to say about that.

“I went down to Kissimmee today, but I’ll probably stay up here in Toho tomorrow,” he added. “I’ve just been pitching a (Zoom) Trick Worm around the Kissimmee grass, but if the wind gets up a little bit tomorrow, I might try chucking and winding something; I don’t know what, but something.”

Rounding out the top 10 pros in the FLW Tour event on Lake Toho after day three:

Day four of the FLW Tour on Lake Toho will begin Sunday at 7 a.m. at the Lakefront Park located at 101 Lake Shore Blvd. in Kissimmee.