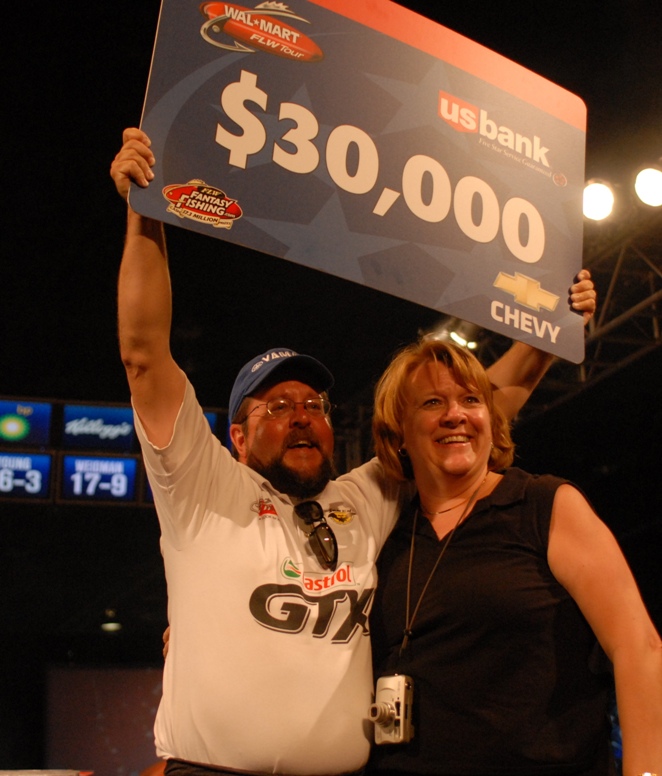 DETROIT – There were a lot of excited people in the Cobo Center for the final day weigh-in of the Co-angler Division of the Chevy Open, but none were more excited than Mark Frickman of Grand Ledge, Mich.

That’s because Frickman brought in an impressive 5-bass limit weighing 19 pounds, 4 ounces to the stage on day three to win the Co-angler Division of the Chevy Open worth $30,000.

“This is overwhelming, I just can’t describe it,” Frickman said after his win. “To come from 53rd on day one to win; don’t ever, ever give up, that’s all I can say.”

Frickman said he got his winning inspiration while fishing with Duracell pro Brennan Bosley of Benton, Ark. on day one.

“Boz has a sticker on his dash that says, `Be Positive,'” Frickman iterated. 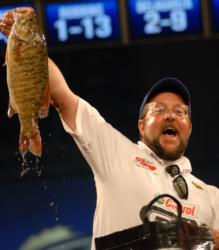 “And that’s just what I did for the rest of the tournament.”

Frickman caught 15 pounds, 1 ounce with Bosley and then fished with Castrol pro Carl Svebeck on day two to sack up 17 pounds, 10 ounces.

But he saved the best for last with his 19-4 stringer on day three while fishing with pro Vic Vatalaro.

Frickman relied on tubes made by Wayne Carpenter and boated his biggest fish on a Berkley Gulp! Goby today.

Rounding out the top-10 co-anglers in the Chevy Open on the Detroit River:

Day four of the Chevy Open on the Detroit River will begin Sunday at 6:30 a.m. from Elizabeth Park Marina located at 202 Grosse Ile Parkway in Trenton, Mich.