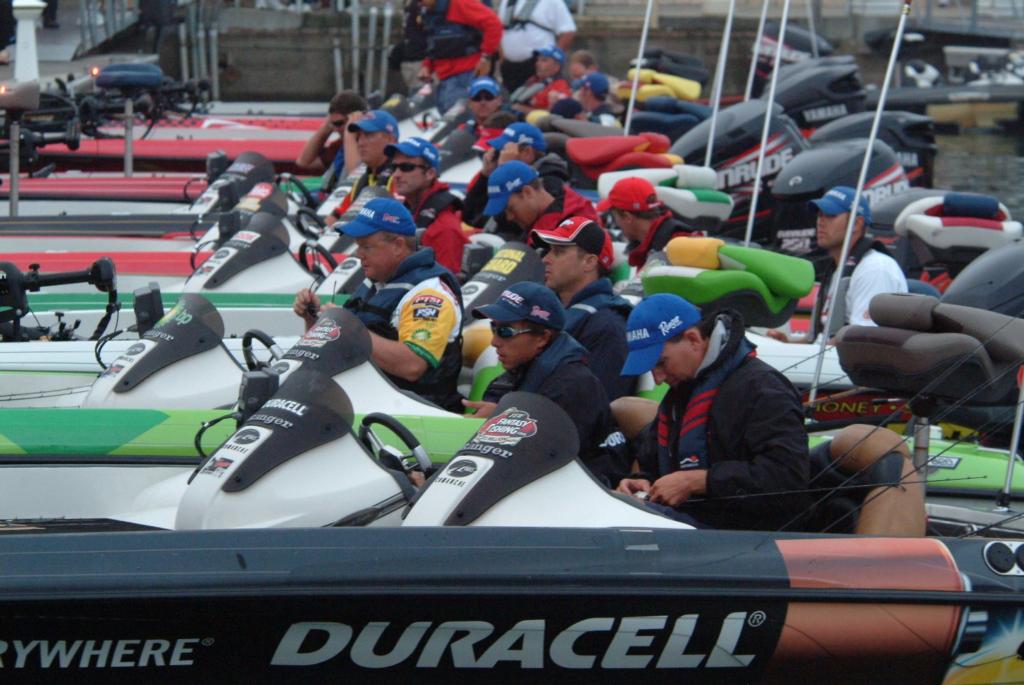 The top-10 finalists prepare for the start of the third day of competition at the 2008 Forrest Wood Cup. Photo by Gary Mortenson.
August 16, 2008 • Gary Mortenson • Tackle Warehouse Pro Circuit

COLUMBIA, S.C. – With overcast skies and a threat of isolated thunderstorms serving as backdrop for day three of competition at the 2008 Forrest Wood Cup, the top-10 pro and co-angler finalists departed the Lake Murray Marina and Yacht Club shortly after 7 a.m. this morning.

To be sure, there is plenty at stake in today’s competition.

For starters, co-anglers will be gunning for a top prize of $50,000 in Saturday’s round of tournament action. Currently, Pat Wilson of Penngrove, Calif., holds the top qualifying position in the Co-angler Division after netting a two-day total weight of 16 pounds, 8 ounces. Per tournament rules, all co-anglers – like their top-10 pro counterparts – have had their previous weights zeroed out for today’s competition. In short, co-angler and pro finalists are essentially starting from scratch as they begin their quest for a tournament title. 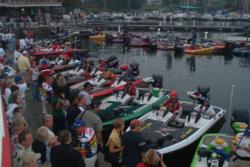 In the Pro Division, the top-10 finalists are facing a grueling two days of high-stakes competition. Today, pros will attempt to boat the largest five-fish stringer possible in an effort to put themselves in the strongest position heading into Sunday’s finals. The pro who ultimately records the heaviest two-day stringer from here on out will be declared the 2008 Forrest Wood Cup champion. In addition to the prestige of winning the title, pros will also be striving to capture the largest first-place award in the history of the sport – $1 million.

The evolution of tournament strategy

Heading into the 2008 Forrest Wood Cup, most fishing experts had predicted that the deep bite would probably prevail on Lake Murray throughout the week, given seasonal patterns and the extremely warm-weather conditions. However something funny happened along the way.

“I was pre-fishing out on deep ledges during the first two days of practice because that’s what I thought you’d have to do to win the tournament,” said FLW Tour pro and top-10 finalist Kevin Vida of Clare, Mich. “But it really wasn’t working out. Then I started seeing these wolf packs – small groups of large fish – in the shallows. Once I figured out how to make those fish bite I decided to totally change gears and start fishing shallow.

“The (other finalists) are pretty spread out across Lake Murray but most of them are fishing shallow as well,” said Vida. 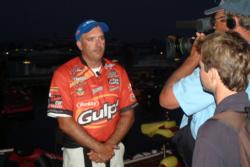 Although many of the top-10 pros have had success all week, Vida firmly believes he’s on the type of the fish to walk away with a tournament title.

“I told (fellow pro) Chip Harrison on the third day of practice that if I can figure out how to make my fish bite, I’ll win the $1 million,” said Vida. “I’m a big sight-fisherman and I’m really good at it. But if you told me I’d be sight-fishing on Lake Murray in the middle of summer I would have told you that you were crazy. But that’s what I’ve been doing all week.”

Vida said that he’s targeting “cruising” bass with a variety of topwater baits. Then when he locates them, he goes sight-fishing for the larger fish. However, it’s not been an easy process – to say the least.

“The fish packs are random and very spooky,” he said. “And I have to see them before they see me. Basically, if the fish see you, it’s over. It’s pretty frustrating actually.”

Vida says that no matter what the conditions are over the next two days, he’s not changing strategies.

“Right now the wind is blowing perfectly for me,” he said. “If it’s sunny out, I can see the fish a little bit better and if it’s overcast, I’ll probably have a better topwater bite. But no matter what, I’m not going to change it up now – not when I see 50 fish over 3 pounds every day. I really want to win this tournament and now I know what I have to shoot for. Let’s put it this way, I’m either going to win $1 million or I’m going to zero. But I’m not changing a thing.” 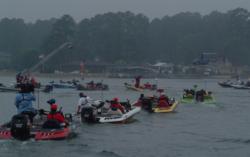 Can`t make the weigh-in in person, then watch it on FLW Live on FLWOutdoors.com beginning at 5 p.m. Eastern Time.

Wind: From the northeast at 8 mph