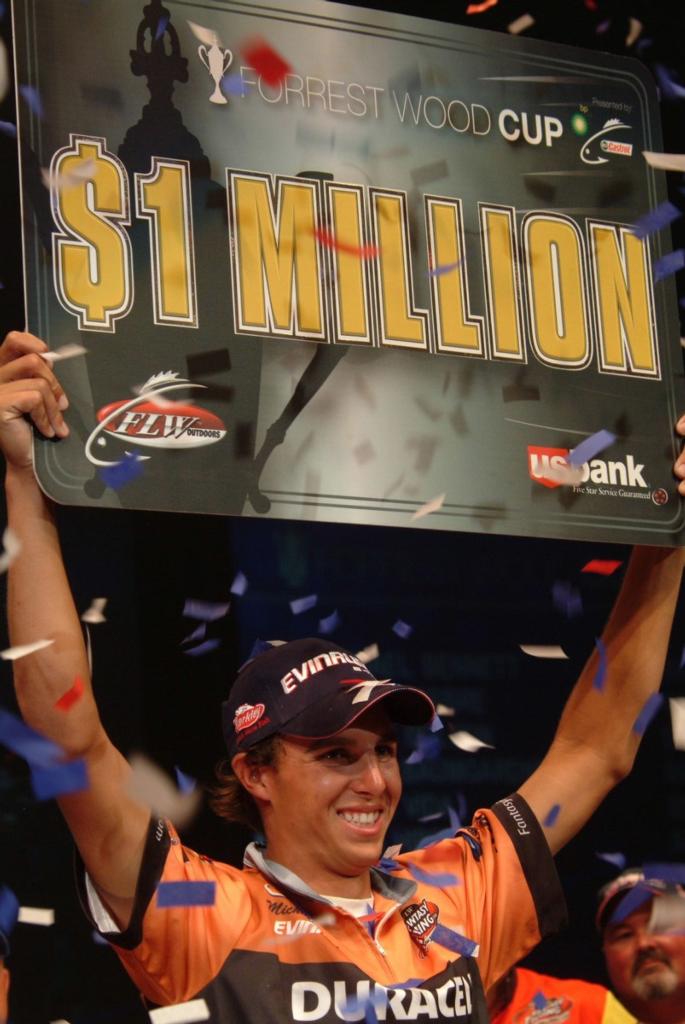 COLUMBIA, S.C. – As the old saying goes, one man’s trash is another man’s treasure.

No one understands that more than Duracell pro Michael Bennett of Lincoln, Calif., who turned his junk-fishing ways into a bass-producing pattern to win $1 million dollars in the 2008 Forrest Wood Cup.

All week, the words “junk-fishing” filled the media room in the Colonial Center during post-tournament interviews as pro after pro described their fishing patterns on Lake Murray this week.

Many pros dubbed their patternless catches as “junk-fishing” or “trash-fishing,” terms that refer to going down the bank casting to “junk” such as lay-downs, willow trees, docks, grass, riprap, seawalls or anything else that gets in the way.

In the beginning, Bennett also described his fishing as junk-fishing. He spent day one fishing deep, shallow and everywhere in between to bring in a limit weighing 11 pounds, 15 ounces. 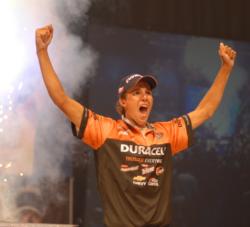 He returned to the water on day two to “junk it up” again, and that’s when he discovered the treasure among the trash. At one point during the day on Friday, he moved shallow and began casting a Snag-Proof frog along docks and grass when he hit a stretch of bank that produced three 3-pound-plus bass.

After finishing a limit on day two at about noon, and knowing he had made the cut, Bennett perhaps made the winning move of the tournament. He quit fishing for about an hour and just drove around the midsection of the lake, looking for the perfect combination of dock shade and grass lines for the finals. During that time, he did not fish – he simply drove around marking the likely looking spots.

“After I found several key areas to start on the next morning, I knew I had to get the deep-fishing notion out of my head,” Bennett explained. “So I spent the last couple of hours of day two fishing deeper with drop-shots and shaky heads. I had bites in practice doing that, so I wanted to make sure that pattern was dead. I never had a bite fishing that way on day two, and that’s when the shallow commitment started.”

Bennett’s weight of 15 pounds, 5 ounces on day two put him in the lead going into the final round where the weights started over. And when the new tournament started on day three with just 10 pros, Bennett started his tournament anew as well, armed with just a pair of frogs and a lot of trolling motor juice.

His primary frog was a Snag-Proof Frog in a color called “Fred,” named after BASS pro Fred Roumbanis, who won an Elite Series event on Murray in May with that very same frog.

“I probably caught 70 to 80 percent of my fish on that frog this week,” Bennett said. “And I fished it on a Fenwick Elite Tech Frogging Stick paired with a Revo 7.1 high-speed reel.”

The other frog was a buzzing type of toad, which only accounted for a few of his keepers during the week.

“I ran to those areas that I had found on day two – the ones that had the right components, but that I had not fished,” Bennett said. “And that’s where I ended up catching all my fish on day three. The neat part was that it was all new water to me – I had never fished it. But that was a key part to the pattern: It had to be new water. Fishing over water I had already fished in the previous days was pointless.”

Bennett felt that the fish he was catching from those specific areas were resident fish, not fish that would replenish any time soon. 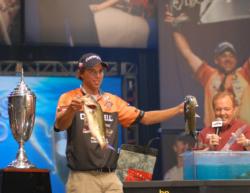 The Duracell pro held the lead after day three with 16 pounds, 3 ounces, but by then he had worked himself into a bind.

“I fished every piece of new water I knew of on day three to catch my limit,” Bennett explained. “I had nothing else to go to on day four.”

But Bennett found a way to milk his pattern even further today.

“Earlier in the week, I had the luxury of fishing big stretches of docks and grass,” he explained. “I refused to return to those places, so I had to start fishing much smaller stretches of the right stuff – single docks or pairs of docks.”

He caught three bass on the frog pattern Sunday and, late in the afternoon, returned to a piece of riprap to catch one of his better fish on a shaky head, rigged with a Berkley hand-poured finesse worm in oxblood color, just before check-in. That fish, caught on Trilene 100% Fluorocarbon, just happened to be his second biggest fish of the day, helping him win the $1 million first-place prize. His four bass today weighed 8 pounds, 14 ounces for a two-day total of 24 pounds, 15 ounces.

After receiving his million-dollar payday, the 24-year-old Bennett was at a loss for words to explain what had just happened to him.

“I can’t even explain it,” said an exasperated Bennett. “I’m an absolute wreck – I can’t even write my own name right now (for autographs) I’m so shook up. It’s a dream come true, and the magnitude of this has not even begun to set in yet.”

Kellogg’s pro Dave Lefebre of Union City, Pa., finished in what is perhaps the most difficult spot in professional bass fishing – runner-up at the Forrest Wood Cup.

Lefebre rallied today with another limit today, but his solid daily weights from the previous 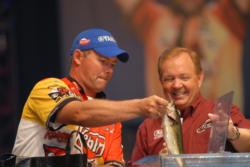 The weight deficit Lefebre needed to win the $1 million was considerable: 5 pounds, 3 ounces. Yet, that does little to ease the pain.

“On one hand, I’m disappointed,” Lefebre said. “This was a once-in-a-lifetime opportunity: I was in a position to win a million dollars, and I may never be in that position again. On the other hand, I thought second paid $50,000, and I just found out it pays $100,000, so I’m pretty pumped about that.”

As for lost fish that may have cost him the win, Lefebre noted that his day four was not exactly flawless. He did have at least two missed opportunities on what he believes were much better fish.

“But I don’t want to dwell on that,” Lefebre said. “I did what I came here to do, and that was to catch a limit every day. I figured if I did that, I’d win, and I didn’t. And if I couldn’t win, I wanted Michael to win – he is a good dude.”

As for Lefebre’s pattern, he spent the week up the Little Saluda River fishing a five-mile stretch of river that he had come to learn well over eight days of fishing.

The key to his pattern was fishing small depressions along the bank.

“Most of the bank up there was 2 to 3 feet deep, and anywhere it dipped to 4 or 5 feet along there was key, especially if it had any cover with those depressions,” he explained.

The Kellogg’s pro spent the week with just one bait in his hands: a 6-inch Berkley Powerbait Flippin’Tail worm in June bug, teamed with a 3/16-ounce Penetrator weight fished on 12-pound-test Gamma fluorocarbon line.

He pitched the Texas-rigged worm to bushes, lay-downs and overhanging branches that coincided with the small depressions.

He also noted that his hook, a Gamakatsu Sugoi hook made for Yamamoto Custom Baits, played a critical part in his success, calling it the perfect hook for that type of light-line flipping and pitching. 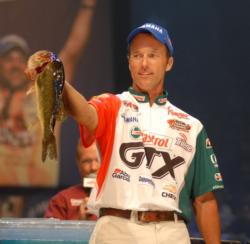 Bolton junk-fished up in the rivers for a majority of the event, relying on several baits for his catches during the week, including a Spro Frog fished on 50-pound-test Berkley Ultracast braid, a Texas-rigged Zoom Trick Worm flipped on 20-pound-test Berkley 100% Fluorocarbon, a Pop-R and an 1/8-ounce Picasso jighead rigged with a Zoom 4-inch Finesse Worm.

“When I was up the river, I focused on willow trees, grass and any dark spots in the water,” Bolton said. “When I came down the lake, I fished a few key docks with a shaky head.”

“The Spro Frog produced my two biggest bass during the week – a 4-pounder and a 6-pounder,” he added. “But I actually got saved by the shaky head today. I only had two keepers at 3:15, ran back down the lake and caught three keepers off one dock to finish my limit.” 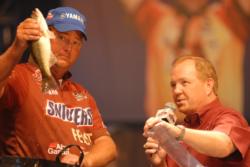 He fished shallow pockets in the midsection of the lake.

The best places were pockets that had small flats in the backs of them with a little shoreline grass,” he described. “Also, the shallow points between pockets were good. I was mostly targeting cruising and roaming fish, so the best plan for me was to cover water and make a lot of casts.”

Berkley Gulp pro Kevin Vida of Clare, Mich., rounded out the top five pros with a 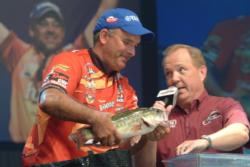 Vida hunted visible “wolf packs” of bass along a two-mile stretch of the main lake that featured a series of points and pockets that he meandered through, looking for the packs.

“I have no idea what these fish were doing,” he said. “I’d just be fishing along and all of a sudden see a pack of bass coming down the bank. They seemed to prefer a kind of sand and rock mix, but I was really apt to see them anywhere.”

Vida used a magnum Pop-R tied to Berkley Sensation monofilament line when searching for the bass. When he made visual contact with the bass, he would fire a Berkley Shaky worm in green-pumpkin and a Mizmo watermelon finesse worm at them to get them to bite.

“Seeing the bass before they saw me and making long casts to them was the key,” he said. “Once the fish saw me, they just would not bite.”

Rounding out the top 10 pros in the Forrest Wood Cup on Lake Murray: