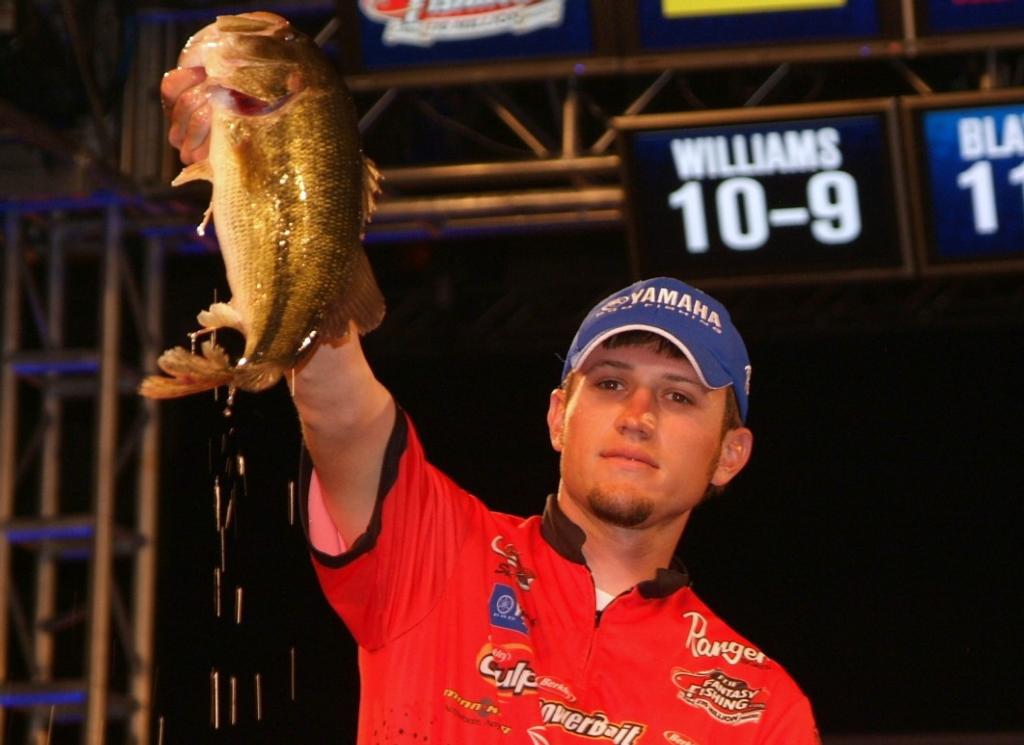 CONCORD, N.C. – In 2008, Stetson Blaylock won the Walmart Open on Beaver Lake and the FLW Tour Co-angler of the Year award. He was fully prepared to make the difficult transition of moving to the front of the boat and fishing as a professional in 2009. Expectations were high, but nobody thought the young phenom would claim victory in year one – not even himself.

Ten years ago, Blaylock was washing and waxing boats at the Walmart BFL All-American. As a teenager, Blaylock spent three nights a week fishing tournaments on lakes around central Arkansas. At 16, he began fishing the Walmart FLW Tour as a co-angler. His dream was to become a professional fisherman and to eventually win a tournament that boasts the toughest competition in the sport.

That dream became reality today as Blaylock won the National Guard Open on Lake Norman. The 21-year-old will go down in the annals of bass fishing as the youngest pro to ever win an FLW Tour event. The five names next to Blaylock on that same list include Michael Bennett, Luke Clausen, Brent Ehrler and David Dudley. That’s some pretty lofty company, and incidentally, all four of those anglers have won the Forrest Wood Cup.

When Blaylock arrived in North Carolina, he started attacking Norman with a homemade 5/16-ounce jig. As practice continued, he was told by his peers that the bass on this particular lake don’t bite a jig once the spawn begins. 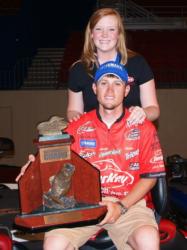 “I guess I proved that theory wrong,” said the Benton, Ark., native. “I think everybody missed out on the jig bite. It was really strong at first, and I know that it triggered the big fish. It wasn’t good for getting a lot of bites, but it was good for getting the right bites.”

Blaylock said the jig had a Texas-colored skirt and was tipped with a 3-inch Berkley Power Craw in green-pumpkin color. As the tournament progressed, the jig bite slowly died. Today Blaylock had to resort to throwing a Berkley Power Bait Slim Shaky Worm, which was also in green-pumpkin color, on a shaky head. Blaylock tied the big jig on 12-pound Berkley 100% Fluorocarbon line and the finesse jig with 10-pound Spiderwire braid with an 8-pound Berkley fluorocarbon leader.

“I think if the tournament was held next week, the jig wouldn’t produce. It was getting worse and worse. Today only three of my five came on the jig, whereas before just about everything came on it.”

Blaylock caught nine keepers today, which was the highest number he recorded in four tournament days. Unbelievably, his three biggest fish were all caught twice. After coming unbuttoned the first time, all three came back and bit his bait again.

The biggest of the three was accompanied by a smaller male. After catching the buck, Blaylock turned his attention to the female who took position on the bed. He tried, but was unsuccessful and decided to leave the fish for later in the day. Blaylock returned at 11:30 a.m., but the fish was still lackadaisical. Finally the 5-pound largemouth bit, he set the hook, and the fish jumped twice and came loose 5 feet from the net.

Despite the unsuccessful attempt, Blaylock decided that this was the winning fish.

“I went back to her, and she was swimming around; I pitched my bait back in there, and she came right over and sat on the bed. I could not believe it. It took me about 30 more minutes to catch her.”

Throughout the tournament, the pro winner claimed he didn’t have a pattern and was just “fishing.” As it 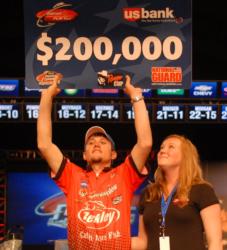 turns out, there was some method to the madness.

“I think all the ones I weighed today were sight-fish. The prior days I spent a lot of time blind-casting docks. But today I decided to do some more looking, and I guess I picked the right pockets.”

Those docks and pockets were located in the middle of the lake, from the Highway 150 Bridge down to the southern third of the impoundment.

“I just love this lake – I love dock fishing and Norman is loaded with them.”

Blaylock’s five best keepers weighed 12 pounds, 13 ounces, which was the heaviest limit of the final round. For a two-day total of 23 pounds, 15 ounces, the Berkley pro will head back to Arkansas with a first-place check for $200,000.

“I really don’t know how it feels yet. But this is it; it doesn’t get any bigger. You’ve got 150 of the best out here. When I stop and look at the list of guys who fished this tournament, then I’ll realize how big it really was.”

Blaylock and his fiance plan to use the money to build a home just outside Benton. The couple is scheduled to tie the knot Sept. 5, 2009.

Andy Morgan had the perfect game plan. In practice, he shook three bass over 5 pounds. Throughout the event, he was carefully saving both bed fish and some key areas for the final round. On day two, he fished mainly docks in order to conserve his best shallow-water stuff. 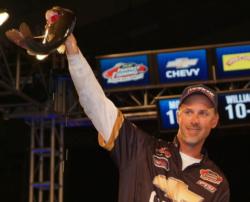 When the final round began, he went to work. The bite was adequate on day three, but strong on day four. During the last two days, he started by throwing a Skinny Dipper in bad-shad color. After a few hours, he switched to flipping bushes with a Beaver and a Super Hog in 10 to 18 inches of water. He fished the extreme north end of the lake and started at the mouth of the creeks with the Dipper and worked all the way to the back.

At 11:30 this morning, he received back-to-back bites that would have won him the tournament had he converted on either one of them.

“There was a little bottleneck in the area with current ripping by. I pitched up there and caught a 3-pounder. I knew I needed one good bite, and I told myself I was staying there.”

Morgan then hooked up with a 4-pounder, but the fish came off when it swam toward the boat and created slack in the line. He then focused his efforts on the remaining four bushes along the bottleneck. A 3 1/2-pounder bit and got hung in a bush, and Morgan quickly moved the boat toward the fish.

“It’s in the bush, and its twisting and flopping just like a catfish in a trotline. It just fell off and that was at exactly 11:36. I threw down my rod and said that was it. I never caught anything of substance after that. That fish rolled off to the tune of about $100,000. It made me sick.”

Morgan finished with 12 pounds, 9 ounces and two-day total of 22-15. His consolation was $55,000. With that check, he surpassed $1 million in career earnings with FLW Outdoors. 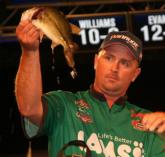 Like many others, Iams pro Koby Kreiger hedged his bets this week on spawning largemouths. The difference is that the Okeechobee, Fla., native is perhaps the best sight-fisherman in the world. Kreiger’s bread and butter was sight-fishing for spawners, but he also searched the banks with a Bomber Long A and a Rebel Pop-R. All of his sight-fish came on a white-pearl Zoom Super Hog.

Kreiger caught a limit Sunday, but they only weighed 9 pounds, 2 ounces. In addition, he missed three blowups on his topwater baits this morning. Combined with his day-three total of 12-9, he finished with a final-round total of 21 pounds, 11 ounces.

“I knew it was going to come down to who got the big bite today. Stetson did and I did not.”

For finishing third, he earned $45,000, which, like Morgan, pushed him to over $1 million in career FLW Outdoors earnings.

“It’s been a goal of mine to win an FLW Tour since I started fishing for a living. I’ve still got four more events left this year.”

If Kreiger is the Michael Jordan of sight-fishing, that means Greg Pugh is Magic Johnson. Anytime there 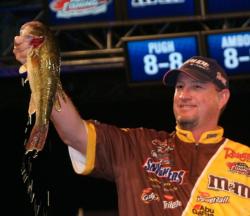 is a sight-fishing tournament, there is a good chance Pugh will be in contention to win. And this week’s FLW Tour qualifier on Lake Norman was no exception. The Cullman, Ala., pro caught a two-day total of 10 bass weighing 19 pounds, 4 ounces. His limit Sunday weighed 10 pounds, 12 ounces.

“It was a little bit better for me today,” said Pugh, who used a green-pumpkin Berkley Shaky Worm and a 5/16-ounce PJ’s jig with a green-pumpkin Zoom Skinny Chunk trailer. The PJ’s jig and trailer is his go-to bait when sight-fishing.

This was Pugh’s third consecutive top-10 finish on Norman. In 2007 he finished eighth and last year he also finished fourth.

“I saw a good one that had to weigh 6 pounds, and it actually went down on my bait, but then it just swam off. I think it stuck its fins at me as it swam by.”

Pugh also had to release a 3-pounder that was foul-hooked. For finishing fourth, he earned $35,000. 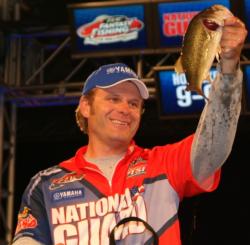 Day four of the National Guard Open was eventful for defending champion Sean Hoernke. In addition to receiving a surprise visit from his father, he had his main tournament boat stolen. For more on that, see Quick Bites. As for the fishing, Hoernke climbed from sixth to fifth via a limit of bass weighing 8 pounds, 14 ounces. He finished with 17-14, good for $30,000.

Hoernke strongly believed that in order to be successful on Norman, it was critical to cover new water and find fresh fish that had just moved up to spawn. He used a brand-new swimbait called a Revo Shad SH in ghost and blue-black heron color as a search tool. Once a fish identified itself, Hoernke would throw a Hoern Toad Tackle shaky head with a 4-inch watermelon-candy finesse worm.

During the final round, the Texas pro fished the extreme north end of the lake, past the Highway 150 Bridge. He worked just below the bridge the first two days of competition.

“I fished my tail off. I have no regrets and no remorse. I never found the fish to win this tournament and go back to back.”

Rounding out the top 10 pro finishers at the National Guard Open on Lake Norman:

The next FLW Tour qualifying event, the Walmart Open, is scheduled for Beaver Lake in Rogers, Ark., May 14-17.