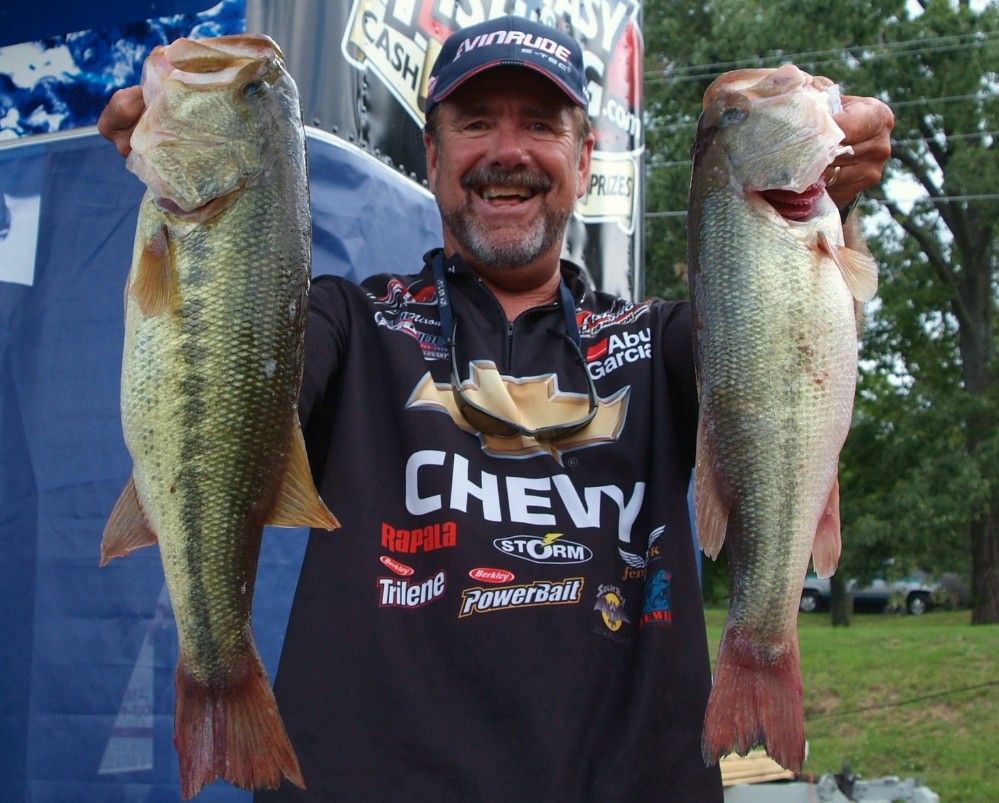 GILBERTSVILLE, Ky. – Much of the pretournament talk centered around the big stringers of bass being caught on the extreme south end of Kentucky Lake near New Johnsonville, Tenn. Day-one leader Larry Nixon executed the long run successfully, but the north end represented with several anglers in the top 10.

Leading a major bass tournament is nothing new to Nixon, but it’s clear he’s on something special. He’s typically tight-lipped about his pattern this early in the tournament, but Thursday he all but zipped it shut. The information he did give up was relatively generic.

Onstage, Nixon said that he used big plastics such as the Berkley Power Worm and Chigger Craw to catch his 24-pound, 3-ounce stringer. He presented these baits near the bottom in water roughly 12 to 15 feet deep. In total, he tried six or seven spots today, and he has others that he never got to.

“The day was so good that culling 4-pounders was my biggest problem. I pulled up on one area where I didn’t catch them real well in practice, and it just turned on – I hit the mother lode.”

Nixon’s 24-3 would have been a full pound heavier if not for two expired-fish penalties. At 10:30 this morning, he already 22 pounds in his livewell, and he could have weighed another five-bass limit of roughly 19 pounds.

“I caught enough big fish in practice to know, if I did everything right, I could catch 30 pounds. If everything goes well, it’s possible to win this thing. I know what the big ones are doing, and I can make them bite.” 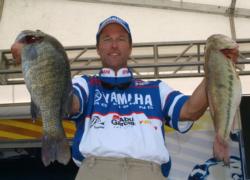 to live in Paducah, Ky., and knows Kentucky Lake extremely well. He spent many years guiding and has won several FLW events (BFL, Stren) on the Tennessee River impoundment. At the 2006 FLW Tour event, he finished second – losing only because of a dead-fish penalty. Bolton said he had an awful practice for this event and is thankful to have at least one successful day in the books.

“I was a bear to my wife all week; I have to apologize,” he said.

Bolton stayed on the north end of the lake, but he moved around a lot – fishing approximately 15 spots and burning nearly 20 gallons of fuel. As practice continued to prove unsuccessful, he began to wonder if he had made a grave mistake by not joining the Paris party.

“That feeling only got worse this morning when just about everybody ran by me. I felt like the last man on Earth – it was not a good thing.”

That sentiment quickly went away though, as Bolton steadily increased his catch, which included four largemouths and one 5 1/2-pound smallmouth. The Yamaha pro said he had 10 rods on his deck and used everything from DT20s to plastics to jigs. He focused most of his efforts in the 15- to 25-foot range.

“When you fish on this side of the lake, they’ve seen so many lures it’s hard to get them to bite. But I think I learned a few new tricks today that will help me.” 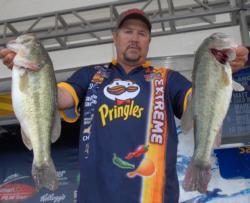 Bolton wasn’t the only angler to have a successful day on the north end of the lake. Pringles pro Jimmy Millsaps of Canton, Ga., caught 22-1 to finish the day in third place.

“I’m running real long – two whole miles,” he laughed. “I just lucked up and found two ledges on the second day of practice, and they have been real good.”

Millsaps’ best ledge didn’t produce today, and he only had one fish at 11 a.m. He then switched to his second spot and had a hefty limit in his livewell by 1:30 in the afternoon.

“After I switched, we just about caught a fish on every cast.”

Millsaps said he used a 3/4-ounce jig with a Zoom Super Chunk trailer. He mixed in a DT22 crankbait and a Zoom Ole Monster worm.

“The key was just finding the right depth where the big ones were at. We started today in about 18 feet, but the big ones were in that 10- to 11-foot range. I don’t know why they aren’t deeper, but I don’t care as long as I keep catching them.” 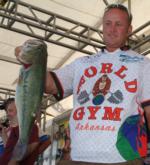 “I’ve only got three schools of fish, and I went to them all because I think they are going to replenish,” he said. “My first spot was pretty dead, but it just got better and better after that.”

Fox targeted ledges in 10 to 18 feet of water with three different baits: a DT22 crankbait (which tricked the smally), a 10-inch Lucky Strike Worm and a spoon.

“I really thought about going south, but I couldn’t bring myself to give up three hours of fishing time. Instead I ran down about 15 miles to the Kenlake area. As it turned out, three of my five fish came in the last three hours of the day, so I needed that time.” 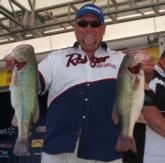 “Practice was phenomenal; I had bags over 30 pounds two different days,” he said. “I could have had that again today, but I lost an 8 (-pounder) and a 6. It’s heartbreaking to lose fish, but that’s part of it.”

Young made a considerable run today, but he did not go all the way to New Johnsonville. He used a Lucky Craft DD, a spinnerbait and a Carolina Rig to catch his bass. The crankbait, which he worked in 12 to 15 feet of water, was the best of the three.

Williams did make the long run with a few of his Land O’Lakes teammates. He reported that the fishing this morning was excellent.

“I pulled up to my first waypoint, and I caught what I just weighed in by 9 a.m.,” he said. “Practice was really good, but you never know exactly what you’re on because you’re not setting up to really catch your fish.”

Using a crankbait and a Zoom Brush Hog, Williams drifted down a main-river ledge.

“I really didn’t have a choice; my trolling motor batteries were fried. I have eight spots, but I only got to one of them today.”

Rounding out the top 10 pros at the FLW Tour event on Kentucky and Barkley lakes after day one: 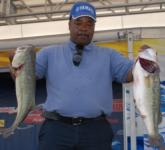 Up until today, Eddie Laster has never led an FLW Outdoors bass tournament. And after losing a 7-pounder on his third cast this morning, his spirits were down in the dumpster. But to his credit, Laster kept working, and the fish did their part by continuing to bite. The Morton, Miss., native finished the day with 20 pounds, 13 ounces and was the only fisherman to crack the 20-pound mark from the back of the boat.

Anchoring his limit was a kicker largemouth that weighed 6 pounds, 5 ounces. That fish bit a 10-inch Berkley Power Worm. Laster also mixed in a crankbait and a Berkley Chigger Craw.

“Once I got my limit, I began throwing different baits than my pro so that his fish wouldn’t become conditioned,” said Laster, who was paired with Christie. “I’m shooting for 15 pounds tomorrow, but I think 12 pounds might just scoot me in the cut. I would have liked to have that big fish, then I wouldn’t have to work so hard tomorrow.”

“Within the first two hours, we both had good sacks,” said Lee, who cranked, jigged and ripped a spoon along offshore ledges.

Lynn Baciuska Jr. of Afton, N.Y., is in third place with a five-bass limit weighing 19 pounds even. Baciuska won the 2008 Stren Series event on the Potomac River as a co-angler and has seven FLW Outdoors top-10 finishes to his name.

Scott Gibson of Wiggins, Miss., is in fourth place with a five-bass limit weighing 18 pounds, 15 ounces.

Rounding out the top 10 co-anglers at the FLW Tour event on Kentucky and Barkley lakes after day one:

Day two of the FLW Tour event on Kentucky and Barkley lakes will begin Friday at 6:30 a.m. at the Kentucky Dam Marina located at 466 Marina Drive in Gilbertsville, Ky. Friday’s weigh-in takes place at 2:30 p.m., also at the dam.