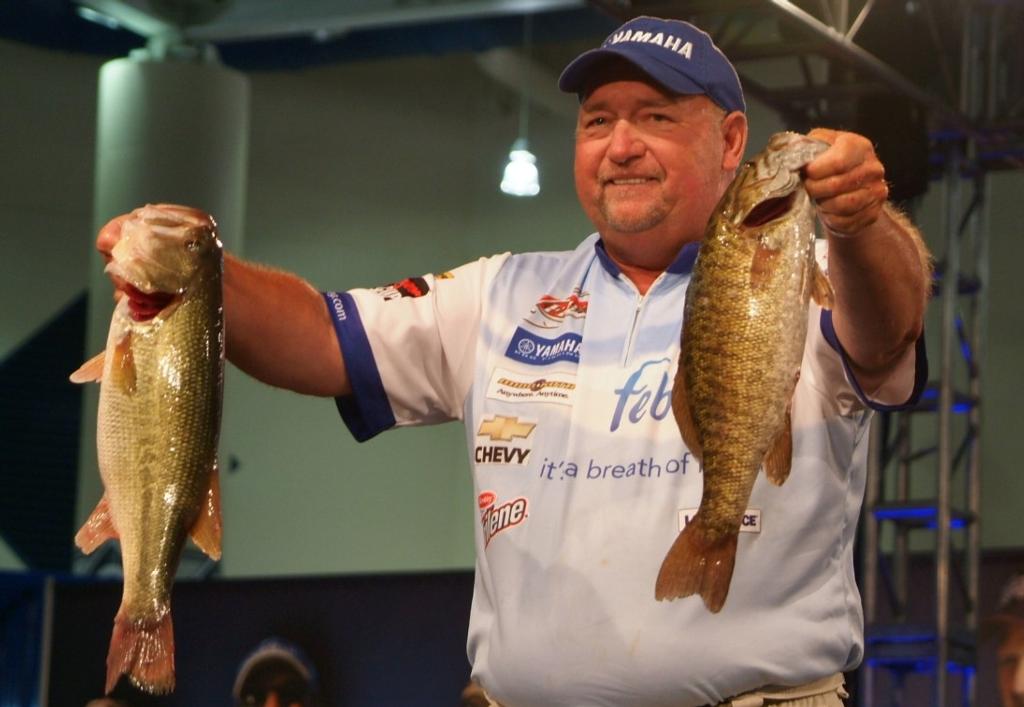 MURRAY, Ky. – Living in Mayfield, Ky., pro David Young knows a thing or two about bass fishing on Kentucky Lake. He’s been waiting for this tournament all year long, and thus far, his game plan has worked flawlessly. But breathing down his neck is Larry Nixon, perhaps the greatest angler to ever pick up a rod and reel.

After finishing second by a tiebreaker at the recent Stren Series event on Kentucky Lake, Young has his sights set on his first Walmart FLW Tour victory.

“I’m feeling real good,” said Young, who has posted 37 top-10 finishes in his FLW Outdoors career. “I have some areas I haven’t even been to yet. A couple of those areas I caught them really good in practice. If those fish are still there, it could be real good.”

Young is mixing up his presentations, depending on the conditions. If the bass are aggressive, he’ll use crankbaits and spoons, and if they are lethargic, he opts for more subtle presentations like a worm and a jig. On day three, he caught 15 keepers, but the bite didn’t pick up until midmorning.

“I only had one fish at 10 a.m. I just can’t figure them out early in the morning. I started on the main lake, but then I went to bays.”

Young is fishing ledges, both when he’s on the main river and in bays, that are in approximately 17 to 22 feet of water. While the majority of the field is targeting grass and shell beds, the pro leader is focusing on rock and shell beds. This is leading to increased catches of smallmouth bass. Today, Young’s limit, which weighed 20 pounds, 1 ounce, consisted of three largemouths and two smallmouths.

“The bays were better today because there was pretty much no current. I’d prefer to fish the main part of the river because it has more potential.”

Young has registered at least 20 pounds each day of the tournament and has saved some prime water for tomorrow.

“I have one place that is absolutely awesome, and I haven’t been to it yet. More than likely I will go there tomorrow, but it’s a long ways away. I’m confident, but you know how things go – it could be hero or zero.” 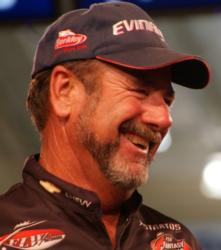 Nixon may have relinquished his grip on first place, but with only a 9-ounce deficit, he still likes his chances. Nixon caught a 19-pound, 8-ounce limit Saturday, most of which came early in the day. The Chevy pro remained tight-lipped about his methods for the third day in a row, although he admitted he is not using a crankbait.

“Where I’m fishing is too deep for a crankbait,” Nixon said. “Everybody’s fishing ledges in 18 to 22 feet of water, and everybody’s kind of got their own thing going. I just love ledge fishing; I love fishing places where everybody can’t see them.”

Nixon said boat pressure was not a problem again today. That’s critical because he’s fishing precise little areas where mussel beds are prevalent. He caught eight keepers total, down from the 15 to 20 he caught yesterday and the 45 to 50 on day one. Still, he remains extremely confident.

“I’ve got two or three areas that have some good fish in them, and if they’ll hold up, I’ll be all right. I’m close enough, and I’ve still got an ace in the hole.”

claim a six-figure payday this year. After catching 17 pounds, 15 ounces, he’s just over 2 pounds off the lead.

Fox is not joining the Paris party down south. In fact, he heads north after taking off from Kenlake State Park Marina. In that area, he works several different ledges.

“It was two, but I’ve got it up to four spots now, but one of them I never got a bite on,” Fox said.

Yesterday, the Springdale, Ark., pro caught his fish on a PJ’s football-head jig with a Yamamoto twin-tail grub. He said the jig helped him locate and feel the shell beds. Today he caught all but one of his fish on a crankbait.

“The crankbait worked because they were on top of the ledge, and I could cover water with it real fast.”

Fox caught seven keepers on the day in total.

“I think I’m due for a great big sack tomorrow.”

Williams, Rose round out top five 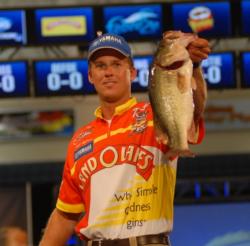 There has never been any question that Keith Williams is on tournament-winning bass. The Land O’Lakes pro has caught limits of 21-12, 18-14 and 17-13. Furthermore, Chevy pro Luke Clausen’s 24-pound, 8-ounce stringer came from the same area yesterday.

While Williams had another successful day, his co-angler, Brandon Hunter, outdid him with 19-11.

To catch his fish, the Conway, Ark., pro is running 75 miles south of the Kentucky Lake Dam Marina. Once he gets there, he fishes a flat that dumps into the main river channel. He uses primarily a jig.

Rose also uses a jig and he, too, was outfished by his co-angler, Frank Divis Sr. Rose caught 14 pounds even while Divis managed 18 pounds even. His jig of choice is a 3/4-ounce Strike King football head tipped with a Strike King Rage Chunk. He also mixes in a Strike King Series 6 crankbait. Rose said that Divis proved to him that he was fishing too fast early in the day.

After taking second at the recent Walmart Open, this is the Marion, Ark., pro’s second consecutive top-10 finish.

Rounding out the top 10 pros at the FLW Tour event on Kentucky and Barkley lakes:

The final day of competition will begin Sunday at 6:30 a.m. at Kenlake State Park Marina, located at 542 Ken-Lake Road in Hardin, Ky.