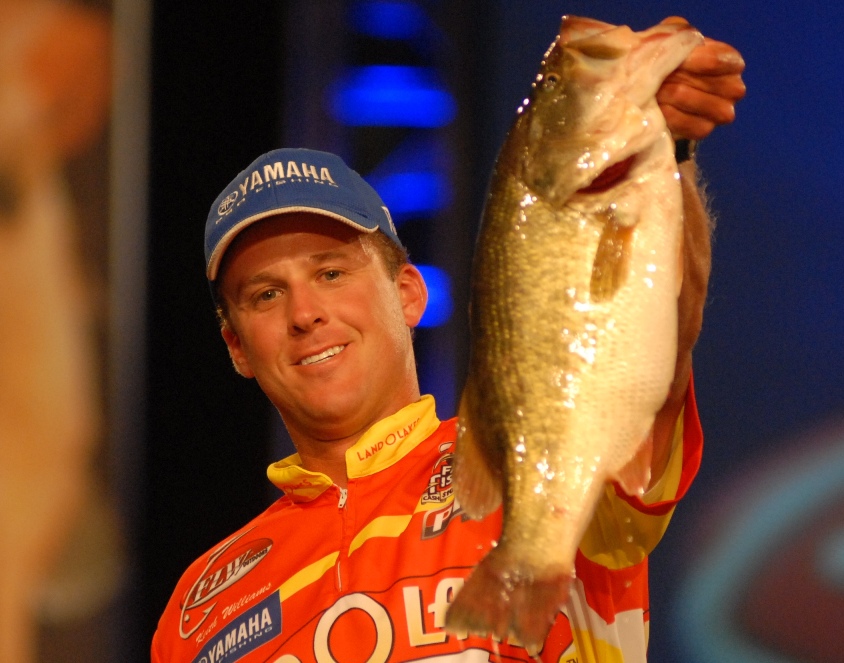 MURRAY, Ky. – Even though the Walmart FLW Tour event took off from Kentucky Lake’s north end, pro Keith Williams committed to the New Johnsonville, Tenn., area from the start. In fact, he never made a single cast into Kentucky waters during the four days of practice or the four days of competition.

What drew the Land O’Lakes pro to the lake’s south end was its plentiful hydrilla. On Williams’ first day of practice, he pulled up to a grass flat and within 10 casts had caught a 7-pounder. He explored the area some more and discovered there was a road bed in front of the flat. Furthermore, a small ditch came off the flat and into the road bed. Best of all, the grass in the area was submerged, meaning most of Williams’ fellow competitors overlooked it. 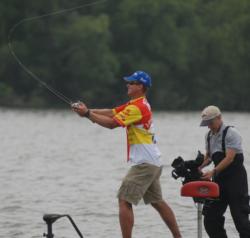 “All of a sudden, I saw (BASS Elite Series pro) Skeet Reese coming right at me,” he said. “That was the final day of their tournament, so, of course, I immediately left. And with him were about 40 other boats, so I kind of wrote the area off.”

But as practice continued, the area continued to replenish. The top of the road bed was approximately 10 feet deep, and it contained the perfect mix of shell beds and hydrilla. Williams estimated this spot was 75 miles south of the Kentucky Lake Dam Marina, the takeoff location the first two days of the tournament. Within this general area, he had three 100-yard stretches of ledges among which he rotated.

For most of the week, his primary bait was a big 3/4-ounce football-head jig that he tipped with a Zoom Brush Hog. But after seeing his co-angler partner from day three catch 19-11 on a big worm, he made the switch. His worm of choice on day four was a 10 1/2-inch Zoom Ole Monster in plum color. He Texas-rigged the worm with a 5/16-ounce Tru Tungsten weight and tied it on 20-pound Berkley Trilene 100% Fluorocarbon line.

“Seventy percent of my bites came on the initial fall. I would put the boat in anywhere from 20 to 30 feet, and I would make long casts up toward the ledge. In the morning, especially on cloudy days, they were way on top of the road bed, and I was keeping my boat deep and making really long casts to keep from spooking them, and I was throwing shallow – maybe even 8 feet.”

Williams’ five-bass limit weighed 24 pounds, 3 ounces, bringing his two-day total in the final round to 42 pounds even. 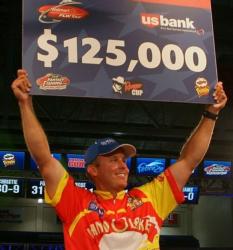 His kicker fish weighed 9 pounds, 1 ounce and was the biggest bass caught during the entire four-day event.

“That was the first fish I caught this morning. Right then I knew that I had a chance to win if I could settle down and catch a limit. When you catch a 9-pounder, it’s your time.”

The Conway, Ark., pro has fished the FLW Tour since 2000. He’s had considerable success, including seven top-10 finishes, but this is by far his biggest paycheck. He said the $125,000 is great, but the self-assurance it will give him for the future is what means the most. After all, Williams didn’t just defeat the FLW Tour field, he out-dueled the area’s top local angler and perhaps the greatest pro to ever pick up a rod and reel.

“There have been a lot of ups and downs over the years, and this will really give me a confidence boost. I had a few good years when I first started fishing the Tour, but then I hit a dry spell. I even considered not fishing, but Land O’Lakes has always been there supporting me. If it wasn’t for them keeping me in it, this wouldn’t have happened.”

David Young has had a tremendous run on his home waters of Kentucky Lake. At the recent Stren Series event, he finished second by a tiebreaker. He also took second this week, but by a larger margin – over 2 pounds. In 1997, he also finished second at the FLW Tour event on Kentucky Lake. That tournament, won by David Fritts, was decided by only 2 ounces. 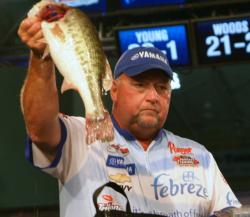 While Young has several victories, the major win still eludes him. Early this morning it looked like a sure thing.

“I told my cameraman to get ready right before I made my first cast,” he said. “Sure enough, I caught a nice keeper, and I caught another keeper on my second cast.”

From there, the day took a difficult turn. Young had a 7-pounder all the way to the boat that actually broke off his hook. He lost another 7-pounder and a 5-pound smallmouth that rolled off right at the edge of the net. Needless to say, it will make for some excellent television coverage.

“It was unbelievable; I should have had 30 pounds. It was absolutely heartbreaking to see those fish come off.”

Young said the key to his success this week was fishing a mixture of mussel and rock. The Mayfield, Ky., pro estimated that half of his spots were homemade.

“I never went to the spot I had saved for today. I never went four or five miles from where we took off this morning (Kenlake).”

Young’s key bait was a 1-ounce Spaits Spoon. As day four concluded, he used a Bill Norman DD22 in chartreuse and blue to give the fish something they hadn’t seen yet.

“When the sun was shining, that spoon was just like a flashlight going off down there. The fish could see it from 20 to 30 feet away.” 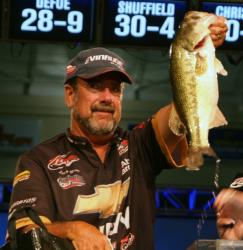 Like many others, Chevy pro Larry Nixon targeted mussel-laden ledges in 18 to 22 feet of water. Day four was by far his toughest day as he managed only 14 pounds, 3 ounces. The three previous days he surpassed the 20-pound mark with relative ease.

When practice began, he used a crankbait and a jig, but all they would produce were tons of little fish. He then switched to the Spaits Spoon, and it made all the difference in the world.

“I got my tail kicked on that thing two years ago in Ultimate Match Fishing by Kelly Jordon,” said the three-time FLW Tour champion. “It is huge and it floats kind of funny, but they absolutely hammer it. Once the tournament started, I never weighed a bass on another lure. Sometimes you had to force-feed them, but if you got one, you could get them every cast.”

Nixon said he lost two bass early in the day, and then his best school shut down.

“I was fishing from the Eggner Ferry Bridge (Highway 68/80) down almost to Paris.”

“That was one of the most fun tournaments I’ve fished in a long time. But I’m still not happy. Every time you make a top-10, you want to win.” 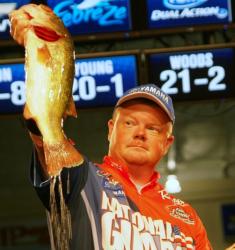 Mark Rose is known as an excellent TVA angler who loves to drag a jig over deep main-river ledges. He did plenty of that this week, and his jig of choice was a 3/4-ounce Strike King football head tipped with a Strike King Rage Chunk. He also mixed in a Strike King Series 6 crankbait.

The Marion, Ark., pro would start every morning just south of the Eggner Ferry Bridge. He would then make a long run about 15 miles south of Paris. Rose weighed 18-11 today after catching only 14 pounds Saturday. His final-round total was 32 pounds, 11 ounces.

“I just fished a conservative tournament the last couple of days,” he said. “I had a small one today that I couldn’t cull; I was hooked up with a 4-pounder, but it jumped and spit my jig.”

After taking second at the recent Walmart Open, this was Rose’s second consecutive top-10 finish. For finishing fourth, he earned $30,000.

“Confidence brings success, and I’m really starting to feel comfortable out there again.”

During the opening round, Fox caught his fish on a PJ’s football-head jig with a Yamamoto twin-tail grub. He said the jig helped him locate and feel the shell beds. During the final round, he caught his bass on a blue-and-chartreuse DD22 crankbait and a 10-inch Lucky Strike Worm. He tied his baits to 12-pound Berkley Trilene 100% Fluorocarbon line.

“Practice was awesome, the tournament was awesome – my week was just outstanding,” said the Springdale, Ark., native.

Fox focused on ledges north of Kenlake State Park Marina. When the fish were on top of the ledges, the crankbait was his best lure.

Rounding out the top 10 pro finishers at the FLW Tour event on Kentucky and Barkley lakes:

National Guard pro Brent Ehrler saw his comfortable lead in the Land O’Lakes Angler of the Year race shrink to only three points after five events. To date, Ehrler has accumulated 905 points, and two-time Angler of the Year Clark Wendlandt, a Kellogg’s pro, has tallied 902 points. Behind them are Chevy pro Luke Clausen with 900 points and Andy Morgan with 881 points.