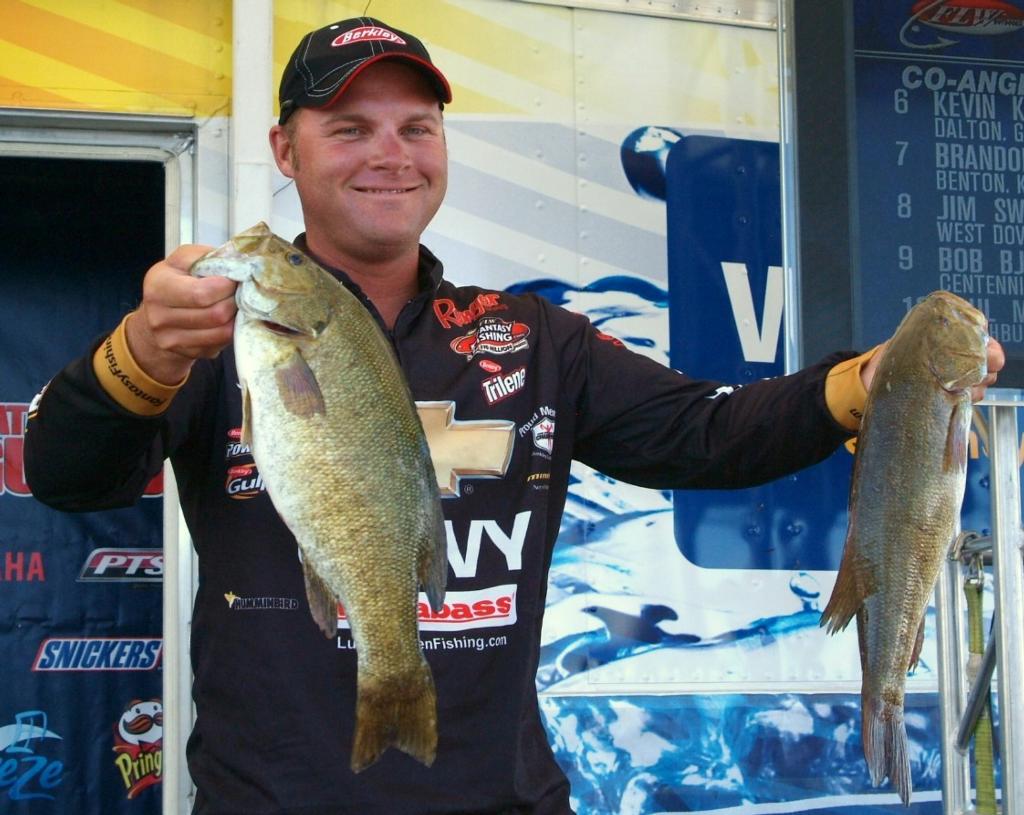 PLATTSBURGH, N.Y. – Each year when FLW Outdoors brings a major tournament to Lake Champlain, Kellogg’s pro Clark Wendlandt targets smallmouths on the north end of the lake. But this year he’s fishing down south in Ticonderoga – figuring largemouths would be needed to make the top-10 cutoff and subsequently claim his third Land O’Lakes Angler of the Year title. Ironically, Luke Clausen might just steal AOY from Wendlandt with his beloved brown bass.

Surprisingly, the Ticonderoga area did not produce as predicted by many. In fact, only Mike Hawkes, Wendlandt and his fellow Kellogg’s teammates Dave Lefebre and Alvin Shaw were able to manage respectable limits from the area’s famed grass mats. For whatever reason, the bite down south was clearly off. 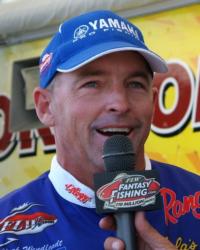 “I just feel fortunate to catch what I did today and still be in it,” said Wendlandt, who caught 17-14 and is tied for 14th place with two other fishermen.

Clausen’s 18-15 put him in sixth place overall and he started the tournament only two points behind Wendlandt in the standings. That means AOY is a virtual dead heat, but Clausen has a slight 6-point advantage. The race could be decided by tomorrow or both anglers could make the top-10 cutoff and the drama could continue into the weekend. Brent Ehrler led coming into the event but caught 16 pounds today and is currently in 46th place, roughly 40 points behind Clausen. But with a big bag Friday he could easily surge back into the picture.

As it stands now, Wendlandt thinks he is returning to Ticonderoga tomorrow.

“Down there all I need is two big bites to get it done. I actually left Ti at about noon today and came up to my best smallie spot and I didn’t catch much. The largemouths down there are fat and I just don’t think I can catch the smallies up here as good as I need to.” 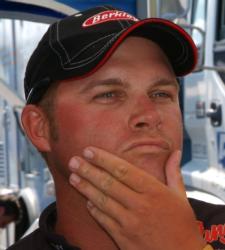 Clausen is full of confidence with his smallmouth program. He caught 15 to 20 keepers today and said the bite was slower than it has been in practice.

“I’ve been catching at least that much everyday,” the Chevy pro said. “I had been catching them on reaction baits but that didn’t work today with the calm weather. If it’s windy, I can catch them all day and cull all day. When it’s slick, I only catch about one or two every hour.”

Clausen said he’s targeting postspawners that are cruising on flats. Today, he drop-shotted a Berkley Gulp leech but he’d prefer to throw the reaction baits. When the wind blows, his fish congregate more on grass lines and drops on the flat.

“Angler of the Year would probably mean more to me than winning the Bassmasters Classic or the Forrest Wood Cup. Instead of being the best angler for a given week, you’re the best from the entire year.”

Outside of AOY, Mark Hardin’s 22-pound, 2-ounce catch was the story of the day. The Jasper, Ga., 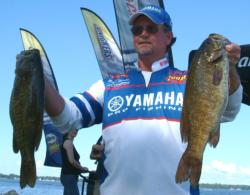 pro threw Lucky Craft and Mega Bass jerkbaits early and then slowed down with a Carolina Rig and a Zoom Speed Craw.

Like Clausen’s, Hardin’s smallmouths are postspawn. He estimated he caught 15 to 20 fish throughout the course of the day after making a 25-mile run.

“They’re sitting out deeper in 14-16 feet of water. I think they’ve been out there a while too.”

Hardin’s best spot is the top of a point that has a mixture of grass and rock.

“I’ve got several good places that are holding fish, but the quality is a little better at this one spot.”

Pete Gluszek nearly won the 2008 FLW Series event on Lake Champlain with largemouths. But this time around, he’s targeting smallmouths – mainly out of necessity.

Gluszek used just about everything in the tackle box today from a jerkbait to a tube to drop-shots and Carolina Rigs.

“When I go smallmouth fishing I have about 10 rods on deck because I believe they go through different phases throughout the day. To be honest, I feel more confident on Champlain when I have a largemouth pattern, but I’m no stranger to catching smallmouths.”

Chevy Open champion David Fritts is back at with the crankbait. Today on Lake Champlain he used it en route to a 19-pound, 5-ounce limit. The Lexington, N.C., angler estimates he caught 30 largemouths and 20 smallmouths. His five heaviest bass were all largemouths.

“I am using the crankbait some but I’m actually catching more fish on plastics,” he said. “I’m around good fish and with the championship already made I’ll be fishing to win again.”

Kindy caught all smallmouths on a unique swimbait pattern. The primary forage for smallmouth bass on 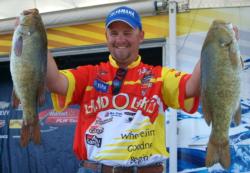 Lake Champlain is perch. But since there are no perch-colored swimbaits, Kindy painted his own with fellow Arkansas pro Scott Suggs. He fished this bait around transitions that changed from rock to sand.

“Today was just one of those phenomenal days where I had a limit by 8 a.m. or so and I culled pretty much all day.”

The final result was a 19-5 limit that Kindy said did not come from his best spot.

“I honestly don’t think I fished my best area today. I had a better day in practice on a different spot but I really wanted to save it. I know I’m around big ones; I just need five a day.” 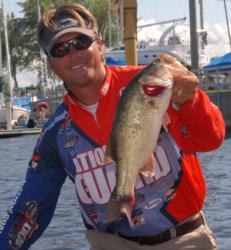 Seemingly unable to do any wrong at Lake Champlain, Clewiston, Florida’s Scott Martin earned the fifth spot in the Pro Division after catching a limit weighing 19 pounds, 2 ounces on day one. Martin won the FLW Tour event on Champlain in 2004 and took fourth in 2006. At both of those tournaments he fished exclusively spawning smallmouths.

At this event, he is primarily targeting largemouths. He has a few spawning smallmouths marked on his GPS, but he didn’t have to go to them today.

“I’ve always chased brown bass up here, but I have an area with a lot of 4-pound largemouths and I really wanted to work it and learn more. The spot I’m fishing, the tournament could definitely be won there.”

Martin says he plans to stick with largemouths tomorrow. Smallmouths could provide a fall-back plan, but he didn’t even check on them today to see if they were still on bed. The two baits he used were a Berkley Chigger Craw and a crankbait.

“They key wasn’t the baits, it was knowing exactly where the fish were and making precise casts.”

Rounding out the top 10 pros on day one at Lake Champlain:

Notable: Even though the calendar says mid-July, Pugh is targeting spawning largemouths. Although he caught 18-11, he lost two sight-fish that each weighed over 4 pounds.

Outpacing 108 other five-bass limits in the Co-angler Division, Justin Lucas of Folsom, Calif., took top honors from the back of the boat with five bass weighing 19 pounds, 3 ounces. Lucas fished with Gluszek and combined the two caught 39 pounds of bass. All five of the ones the National Guard co-angler weighed were smallmouths.

“I had all my fish by like 10 in the morning,” said the four-time FLW Series winner. “I threw mainly a Lucky Craft Pointer 100 jerkbait and I also mixed in some Berkley Gulp leeches. I tied 10-pound Berkley 100 percent fluorocarbon line to my jerkbait and that seemed to work really well.”

This is Lucas’ first visit to Champlain and needless to say he is impressed. After prequalifying for the Forrest Wood Cup through the FLW Series, Lucas’ sights are set solely on victory.

In second place for the co-anglers is James Schneider with 18-12. Schneider is a local who lives in Watervliet, N.Y. In 2006, he took fourth at the FLW Tour event on his home lake. Overall, he has three FLW Outdoors top-10 finishes on Champlain.

“I fished with Mike Hawkes today and we flipped down south,” he said. “I caught all largemouths on a 3/4-ounce Lil’ Hustler jig and I had most of my fish by 9 a.m.”

Schneider recently had surgery on his right shoulder. Today he had to use his left arm to set the hook. It was a little unorthodox, but he didn’t lose any fish. His largest bass weighed 5 pounds, 7 ounces and was the Co-angler Division Big Bass of the day.