Hackney hauls in a half million 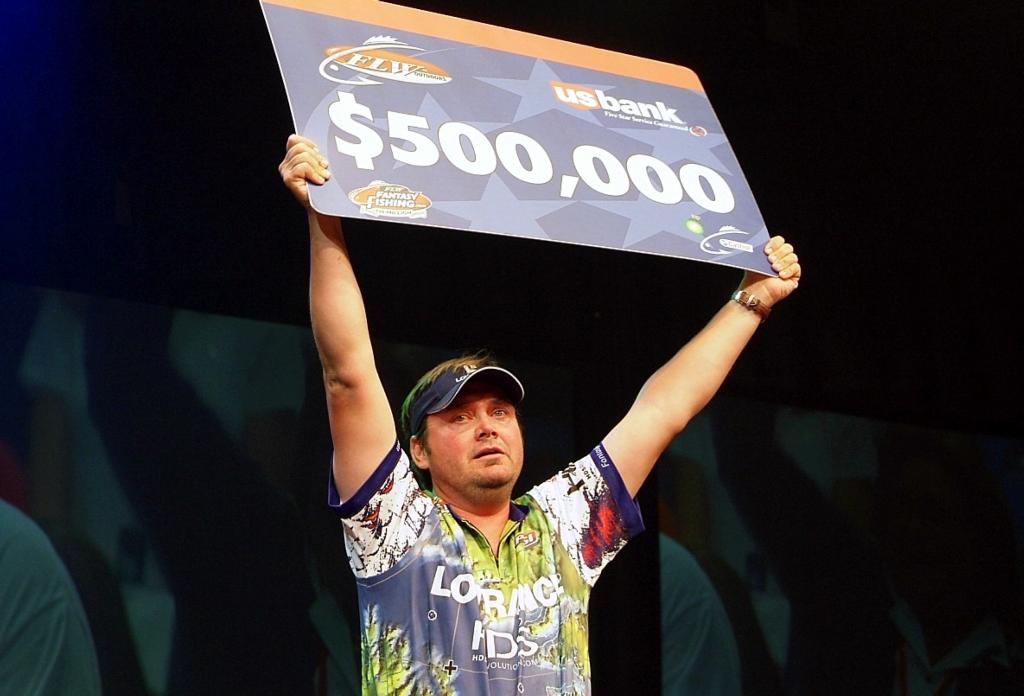 PITTSBURGH – At the 2005 Bassmaster Classic on the Three Rivers, pro Greg Hackney failed to catch a keeper bass in two days of competition. Four years later he arrived in Pittsburgh for the Forrest Wood Cup with a singular focus of targeting 12-inch fish. At the Classic, Hackney gambled on largemouths and came up empty-handed. This time around he fished for smallmouth bass, and the end result was a $500,000 payday, the largest in his eight-year career.

Hackney began the four-day tournament in the Pittsburgh pool. On day one he limped in with just three bass weighing 3 pounds, 1 ounce. On day two he traveled through three locks, heading up the Allegheny River, and fished an area just below the dam. With perfect conditions, he stunned the Mellon Arena crowd with an 11-pound, 12-ounce stringer, by far the heaviest of the entire championship event. 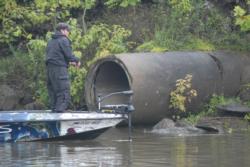 “My best day of practice was three pools up, but I wanted to lay off of it until I had to,” he said.

This area had a mix of everything a river angler could want including drains, lay-downs, rocky banks and current seams. Flowing in from the east was the Kiskiminetas River, and where the Kiski met the Allegheny was a perfect seam of clean and dirty water. With the heavy rains received early in the tournament, the water in the Allegheny had only a foot of clarity, whereas the Kiski still was offering 3 feet.

While the seams were a major part of his winning pattern, Hackney would cover water throughout the day – starting below the dam and venturing so far as a half-mile into the Kiski. On day two he actually sight-fished a smallmouth off a log in the Kiski.

As the Allegheny changed each day, so did Hackney’s approach. It may sound like junk-fishing, but there was some method to the madness.

“The fish were on a rock break behind the dam. On day two we finally got enough current where they pushed off the dam into the seams. My key bait that day was a 1/4-ounce Strike King spinnerbait in golden-shiner. The golden shiner seems to be a really good color for smallmouths.” 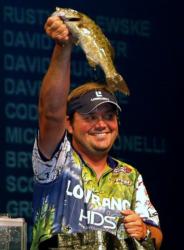 “All of my better fish today came off a hard break. This place had everything – current, mixing water and structure. And to sweeten the pot, there were mayflies in the overhanging trees. This all looked good, but it seemed wherever there was a hard bottom is where the better fish were. Where there was mud, there were short fish.”

To illustrate Hackney’s junk-fishing, consider this chain of events. While fishing a jerkbait under overhanging trees, Hackney hooked up with a small keeper. It came off, and the Gonzales, La., pro immediately threw out a drop-shot. The fish bit but came unbuttoned again, and Hackney subsequently pulled out a buzzbait. Amazingly, the aggressive smallmouth bit three times, and this time the pro winner got it in the boat.

In brutally tough conditions, Hackney calmly caught a 5-pound, 6-ounce limit Sunday, which brought his two-day total to 9 pounds, 9 ounces. The most nerve-wracking part of the week was day three when 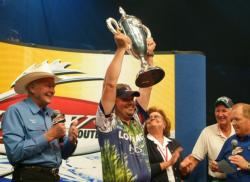 he caught his biggest fish with only five minutes remaining. Up until that fish, he felt his opportunity to win was slipping away.

Hackney won the Land O’Lakes Angler of the Year award on the FLW Tour in 2005. He also won the 2008 FLW Series East-West Fish-Off on Falcon Lake, which earned him his Forrest Wood Cup berth.

“This is the best day of my professional life. It’s been awhile since I won Angler of the Year, and at the time I thought that was the best (accomplishment). Now I don’t know. This is one of those deals where it takes awhile to sink in. This is not about the money though – it never has been.”

Hackney then pointed to the Cup and said, “That’s what it’s all about.”

On day four he caught a limit weighing 4 pounds, 10 ounces, and on day three he caught only four that 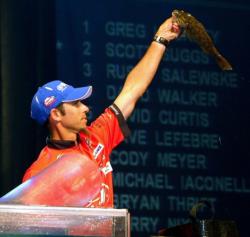 went 4-12. Yesterday he lost two small fish, but fish that would have met the minimum 12-inch length requirement. While they only would have weighed 11 or 12 ounces, they would have easily made up the 3-ounce difference between Iaconelli and his fellow BASS Elite Series pro Hackney.

While Iaconelli agonized over that missed opportunity, he acknowledged that, for the most part, he fished a clean tournament. He started the event two locks up in the Allegheny. He switched to the Ohio during the final round in an effort to target less-pressured fish.

“The first two days my key baits were a Jackall jerkbait and a Berkley Gulp Alive Minnow on a drop-shot. The last two days the best bait was a green-pumpkin 5-inch Gulp Sinking Minnow. I would cut off about a half-inch, make a blunt end and put it on a 1/4-ounce Ikey Head jig.”

The 2003 Bassmaster Angler of the Year fished these lures primarily on 10-pound Trilene 100% Fluorocarbon line. Of all the pro finalists, he probably had the steadiest pattern.

“I basically ran around and tried to fish 100 eddies a day. I would cast upstream and bounce the bait over rocks. Anywhere where there was a backswirl, I stopped and fished it. The current was heavy in the Ohio, so the bait had to be bulky for the fish to be able to find it.”

For nine bass over two days that weighed 9 pounds, 6 ounces, the Runnemede, N.J., pro earned $100,000. He noted that the two Pittsburgh events are the toughest tournaments in which he’s ever competed.

“It was just a grind, and I was mentally prepared for that coming in.”

Iaconelli’s journey that began at the Lake Champlain Stren Series tournament last July ended by the slimmest margin of defeat in Forrest Wood Cup history. Iaconelli fans will want to know that his popular “City Limits Fishing” show on the VERSUS network will be filming in Pittsburgh at the end of August.

“I don’t think I’ve ever felt this confident in my whole life, even when I was fishing club tournaments. It’s just a matter of time before I close one of these up.” 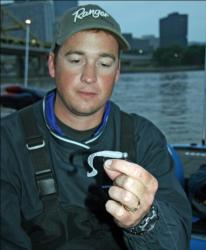 impersonation of Brent Ehrler and Michael Bennett, finishing with a two-day total of 7 pounds, 15 ounces worth $75,000.

Meyer fished a drop-shot with a 4-inch Jackall Crosstail shad and an 1/8-ounce Mass Menu jig and 4-inch single-tail Yamamoto grub. The drop-shot was effective early in the tournament, but the grub caught most of the fish the last two days. Tied on to these baits was 8-pound Trilene 100% Fluorocarbon line.

Meyer’s primary area was located three locks up the Allegheny, just behind the two islands. He skipped his baits along the rocky bank, focusing on shady, overhanging trees. On day one he fished in the Monongahela.

“I would pitch the grub up under the shade lines and then bring it back down to about 6 feet,” said the 26-year-old from Redding, Calif.

Although he caught 40 bass Sunday, only three were keepers.

“I had more bites today than I had all week, but I knew I had to get a limit to win. To me, it’s more fun to fish a tough tournament like this than a slugfest. A keeper means so much.”

This is Meyer’s fifth top-10 finish of the season. His previous four came in the Stren Series Western Division and the FLW Series National Guard Western Division. His next tournament is a Walmart FLW Series tilt at the California Delta the third week in September.

“Just to come out here and represent the West Coast is amazing.” 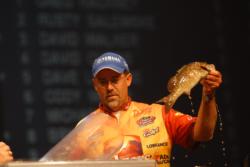 worth $60,000. Suggs caught three bass each of the last two days, his day-four stringer weighing 3 pounds, 4 ounces. Furthermore, he was the only pro finalist who never caught a five-bass limit all week.

Before the tournament began, Suggs was dialed in on an offshore pattern one lock up in the Allegheny. On day one, he fished some water two locks up the Allegheny near Iaconelli, but his main area was after the first lock. Unfortunately, the rain and added current ripped his fish downstream. On day two he was able to find success behind an island that broke the current, but that was only temporary.

“With the current, I had to resort to junk-fishing, or what I call trash-fishing,” said bass fishing’s first instant millionaire.

On day three Suggs retreated into a backwater area and caught two largemouths on back-to-back casts. Essentially, Suggs was at a crossroads the last two days. He needed the water to come down and clear up for his offshore smallmouth pattern to work. Had the water continued to come up, he could have safely entered his shallow backwater area.

When fishing for smallmouths, Suggs used bigger, heavier tubes, which he Texas-rigged, in green-pumpkin color. 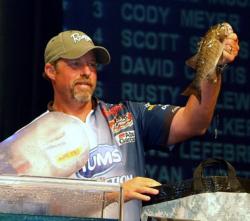 Falling from first to fifth was Alpine, Calif., pro Rusty Salewske, who earned $50,000 with a final-round total of 7 pounds, 4 ounces. Salewske weighed in a limit yesterday, but caught only a single 14-ounce bass on day four.

Salewske, who qualified through the FLW Series Western Division, fished four locks up the Allegheny and traveled the farthest of any pro. He found his primary area with friend and fellow Western pro Brett Hite on the last day of practice.

Earlier in the week he threw topwaters, but the last few days he primarily pitched a 1/4-ounce jig tipped with a Smallie Beaver into shade pockets along a seawall. He would fish extremely fast for 100 yards or so until he received a bite. Once he got that bite, he would then slow down and thoroughly work the shady area.

Salewske emphasized that baits were not the reason for his success, but instead the key was figuring out where the ever-transient river fish were positioned.

Rounding out the top 10 pros at the Forrest Wood Cup on the Three Rivers: