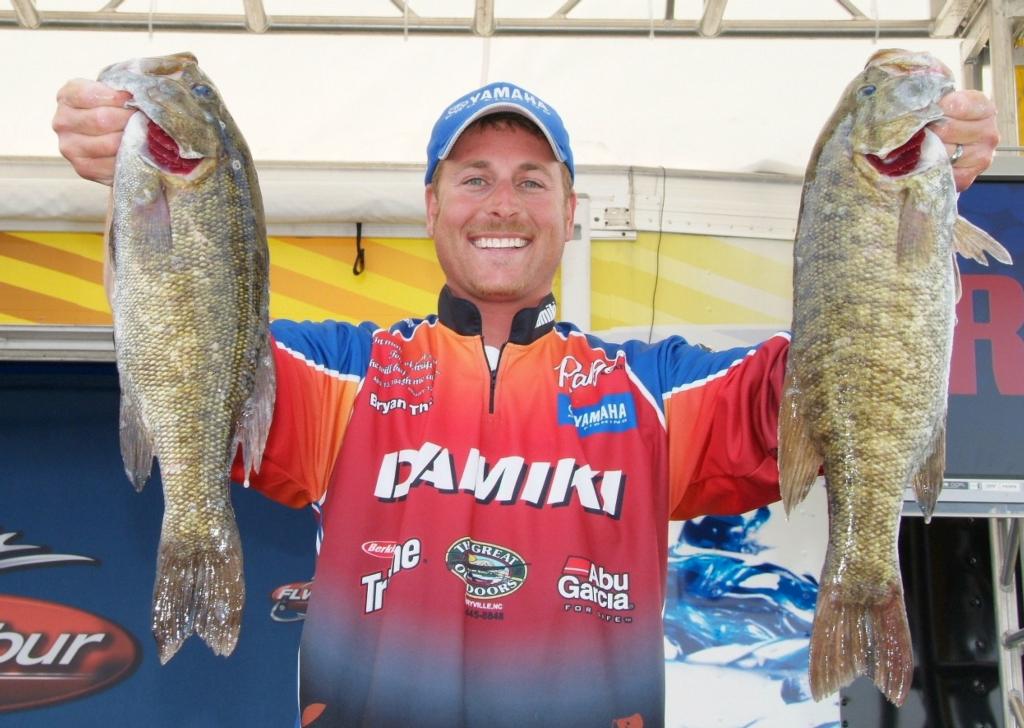 LENOIR CITY, Tenn. – Brent Ehrler’s ascension to the top of the FLW Outdoors pyramid may be short lived. While Ehrler, currently in 20th place, is putting together a solid tournament, another FLW Tour pro looks unstoppable. After winning the second qualifier of the year on Lake Norman, Bryan Thrift leads the Fort Loudoun-Tellico lakes event at the halfway point.

Yesterday Thrift said he pretty much burned all the bedding smallmouths he had. But to his delight, one of his areas replenished.

“I figured it would be a lot tougher today,” he said. “I had two left on bed this morning. I caught those, and then I started looking some more. On the same bank I caught those big ones yesterday, I caught four more. I guess some new ones moved up.”

Thrift only caught seven keepers Thursday, but he also foul hooked a 3 1/2-pounder that had to be 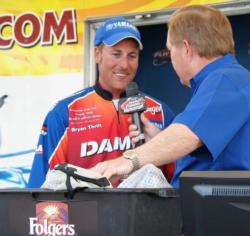 returned to the lake. According to rules, all fish caught outside of the mouth while sight-fishing must be immediately released. Knowing the aggressive nature of smallmouth bass, he thinks he can get it to bite again.

“I found another one that I think will keep, and if that one that I foul hooked will bite again, I’ll have two for tomorrow.”

Friday’s forecast calls for scattered thunderstorms, which could severely hamper the sight bite.

His main sight-fishing bait is a Texas-rigged Damiki Hydra (green-pumpkin). He’ll also occasionally mix in an unnamed soft-plastic crayfish. Ideally, Thrift will catch the two smallmouths early tomorrow and then switch to throwing a swimbait or topwater if the weather gets dicey.

“I caught one largemouth doing that on the first day and two today.”

With major momentum on his side, the Shelby, N.C., pro looks almost invincible. After registering 15-15 today, his total weight stands at 36 pounds, 2 ounces.

“I don’t know what it is; it’s hard to explain. To be honest, I don’t feel like I have enough to win. But I didn’t think I had much going before today.” 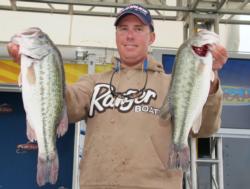 two – catching another limit that weighed 16 pounds, 15 ounces. All of Browne’s fish thus far have been largemouths. The Ocala, Fla., native said the bite was actually stronger today.

“I caught two limits yesterday, and I think I caught about three limits today. I must have caught 30 to 40 fish total. I’m having a blast.”

When Browne is having fun, you can safely assume he’s fishing shallow, dirty water. And that’s precisely the case this week as he targets lay-downs and docks on Fort Loudoun.

“Yesterday I caught a few on the new Gambler Big E-Z swimbait, but today they all came on the 4-inch Gambler flipping tube.”

While excited, Browne is also somewhat apprehensive about what lies ahead.

“I’ve been in this position a few times before, and shallow-water fish tend to peter out. But the weather could really hurt the sight-fishing guys. I’m just going to try and catch 11 or 12 pounds tomorrow; I feel like that’s realistic.”

Goodwill pro Chad Grigsby had an eventful day sight-fishing for smallmouths on Fort Loudoun. The end result was an 18-pound, 1-ounce limit, the heaviest registered Thursday. It looks great on paper, but it was extremely dicey at times. 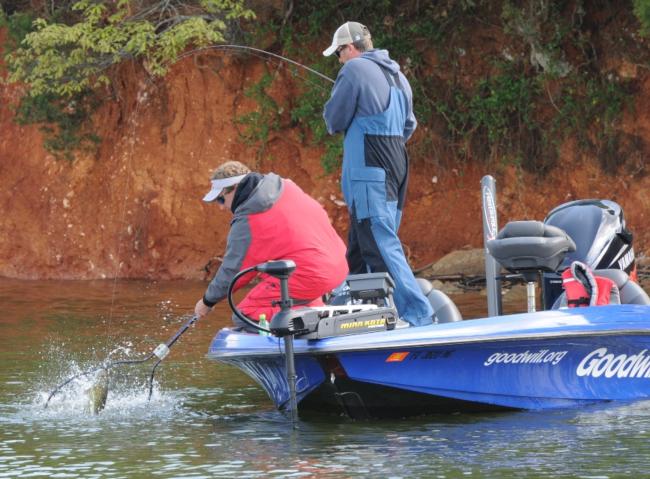 “I had no fish in the livewell at 11 a.m., but in the next three hours, I had all of my weight,” Grigsby said. “I lost one of my big fish seven times before I got it in the boat. The sixth time it actually jumped, and the hook hit the side of the boat and popped free. But I eventually got her – so it’s all good.”

Grigsby thinks he’s got one keeper left on bed. Like the other sight-fishermen, he’s keenly aware of the forecasted weather.

“I had to have it slick calm to catch them today. So I don’t know what’s going to happen tomorrow. Hopefully I will catch that one, and then maybe I’ll go flip for largemouths.”

Grigsby said the smallmouth beds he’s targeting are in 3 to 4 feet of water, but the water clarity in his area is only 2 feet.

“I’m basically throwing to little dark spots. And the frustrating part is that I can’t tell if they’re 16 inches or 19 inches. I worked on a 16-incher today for over 15 minutes, thinking it was a keeper.”

The Michigan transplant and current Twin Cities resident is using a drop-shot and a Berkley Gulp minnow.

“The hardest part about catching these fish is finding them. It doesn’t matter what you throw. If you get one that is running and chasing, she’ll bite anything.” 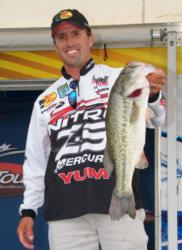 Bassmaster Elite Series pro Edwin Evers has had a pretty quiet 2010 FLW Tour season. That all changed this afternoon when he brought 16 pounds, 13 ounces to the scale, bringing his total weight to 29 pounds, 5 ounces.

“I caught about eight or nine keepers today; I figured something out late yesterday that really helped me.”

Anchoring Evers’ limit was a 5-pound-plus largemouth. Amazingly, Evers said he lost two fish that were in the same class.

“I really like my chances. I think it actually might get better for me with the weather tomorrow.” 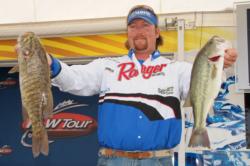 “I caught only two smallmouths off bed today,” said the Palm Bay, Fla., pro. “I thought I had enough saved, but some definitely vanished.”

Kenney adjusted late in the day and dialed into a largemouth pattern. He caught two nice green ones and lost another.

“I also found another smallmouth late. I’ll go back to her right away, and then I’ll expand on this largemouth deal. The weather we’re supposed to get should help for just fishing. I’m really excited for tomorrow.”

Rounding out the top 10 pros at the FLW Tour event on the Fort Loudoun-Tellico lakes after day two:

Darrell Mitchell of Taneyville, Mo., leads the Co-angler Division with a total of 10 bass weighing 18 pounds, 10 ounces, followed by Kevin Hawk of Ramona, Calif., in second place with eight bass 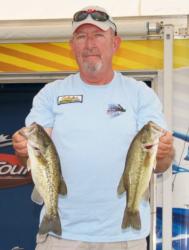 “I have been very pleased with my draws, and I think I have another good one tomorrow in Terry (Bolton). It’s been a great tournament.”

Mitchell is catching his fish with a 5/16-ounce PJ’s Lil jig. Yesterday he used a Yamamoto twin-tail grub as a trailer, and today he switched to a Paca Chunk.

“The pressure is on tomorrow. I think my wife is more nervous than I am. She almost needed CPR.”

This is Mitchell’s rookie season on the FLW Tour. He finished 11th at the season opener on Table Rock – his home lake.

Following him is local angler Keith Iddins of Knoxville, Tenn. Despite not catching a keeper on day one, Iddins sacked up 14 pounds, 2 ounces today. That stringer is the heaviest of the tournament thus far for the co-anglers.

Rounding out the top 10 co-anglers at the FLW Tour event on the Fort Loudoun-Tellico lakes after day two:

Day three of the FLW Tour event on the Fort Loudoun-Tellico lakes will begin Friday at 7 a.m. at the Tellico Recreational Area Ramp.