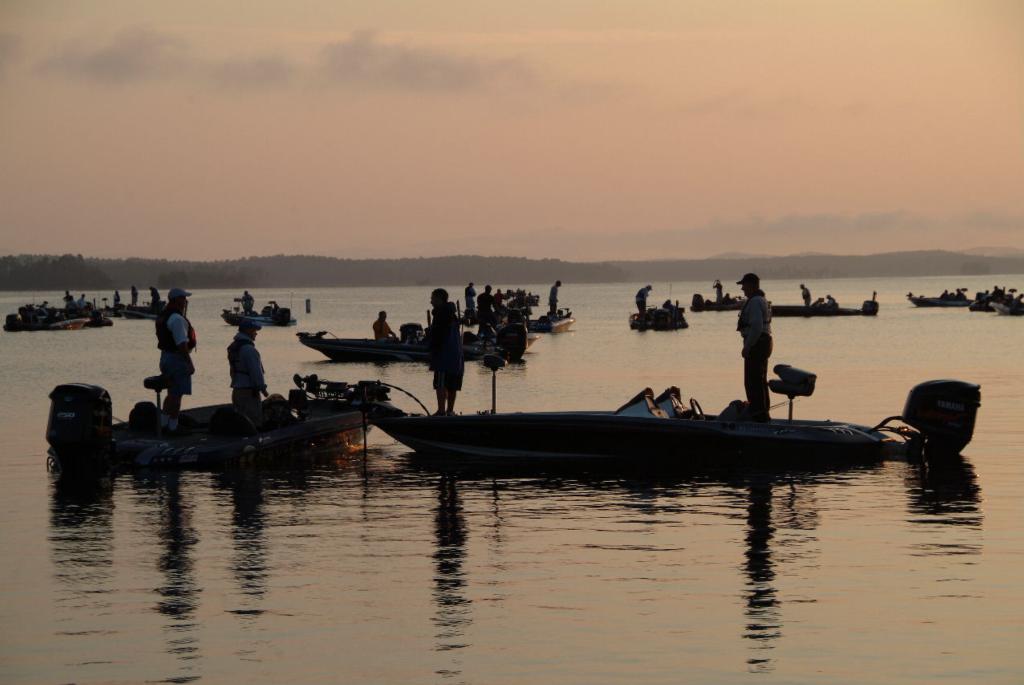 HOT SPRINGS, Ark. – With no fog in sight and relatively clear skies on the horizon, FLW Tour anglers were able to kick off Thursday’s takeoff on time, departing Mountain Harbor Resort marina shortly after 6:30 a.m. However, while there were no morning fog delays to slow anglers down like yesterday’s competition, anglers still faced the prospect of falling water levels and potential changes to their strategic outlook.

Although water levels had been anywhere from 3 to 4 feet above normal pool due to flooding at the start of the week, the Lake Ouachita spillover has continued to recede with each passing day. Most affected by the changing conditions were anglers who had been pinning their hopes on the shallow-water bite. As the water levels pull back from the shoreline, less cover is available on the banks for the fish to congregate in. Consequently, a larger population of fish – especially post-spawn bass – will begin to gradually move back out into deeper water in search of new cover.

And that means that shallow water anglers will have their work cut out for them. 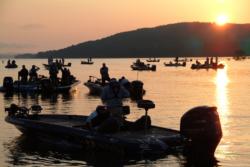 “The falling water levels are definitely going to change the shallow water bite,” said veteran FLW Tour pro George Cochran, a local Hot Springs, Ark., resident who knows Lake Ouachita as well as anyone on the tour. “At the beginning of the week, the (available fishing areas) were wide open. But with the falling water, the fish’s feeding areas have gotten smaller and smaller. And that’s starting to play into the hands of the guys fishing deep.”

“They’re going to keep pulling water until it gets back to normal,” said Cochran. “For me, I don’t like to fish deep unless I really have to. So I’m going to have to keep looking for shallow cover that has more water on it than other places. But there are definitely more and more fish moving deeper everyday. And they should be, because it’s summertime for them.”

Making matters even more challenging for shallow-water anglers is the recent changes in water clarity.

“Not only is the water falling but it’s gotten clearer,” said Cochran. “The fish are cruising around and they’re already hard to catch. But with the clear water, they’ve gotten spooky as well. So that makes it more difficult.” 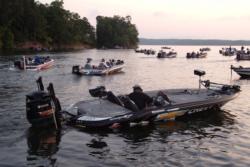 The entire FLW Tour field will compete for three days with the top-five pros advancing to the fourth and final day of competition based on their overall accumulated weight. At the end of day three, a co-angler champion will be crowned. After the conclusion of Saturday’s weigh-in, the tournament title will be awarded to the pro who has recorded the most combined weight over all four days of FLW Tour competition.

Fans will be treated to the FLW Outdoors Expo at the Hot Springs Convention Center on Friday from 4-9 p.m. and Saturday prior to the final weigh-in from 10 a.m. – 4 p.m. The final weigh-in will be held at Summit Arena. There will be a drawing for a Can-Am ATV and rod and reel combos will be given to the first 300 kids under 14 in attendance on Saturday. The FLW Outdoors Expo includes Ranger boat simulators, the opportunity to interact with professional anglers, enjoy interactive games, activities and giveaways provided by sponsors, and learn more about the sport of fishing and other outdoor activities. All activities are free and open to the public. For a full schedule of events, additional information and to register for the ATV, visit FLWOutdoors.com/chevyopen.

In FLW Tour competition, anglers are also vying for valuable points in hopes of qualifying for the 2010 Forrest Wood Cup, the world championship of bass fishing. This year’s Cup will be in Atlanta Aug. 5-8 on Lake Lanier.

Coverage of the Lake Ouachita tournament will be broadcast in high definition (HD) on VERSUS. “FLW Outdoors” will air June 27 from 12:30 to 1:30 ET. “FLW Outdoors,” hosted by Jason Harper, is broadcast to approximately 500 million households worldwide.

Want to watch the weigh in live but can’t make it in person? Then tune into FLW Live on FLWOutdoors.com shortly before 3 p.m. Central Time to watch live streaming video and audio of today’s opening-round weigh in. 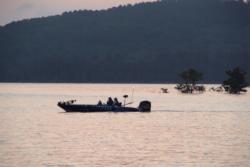 Wind: From the west-northwest at 3-6 mph