Ouachita title up for grabs 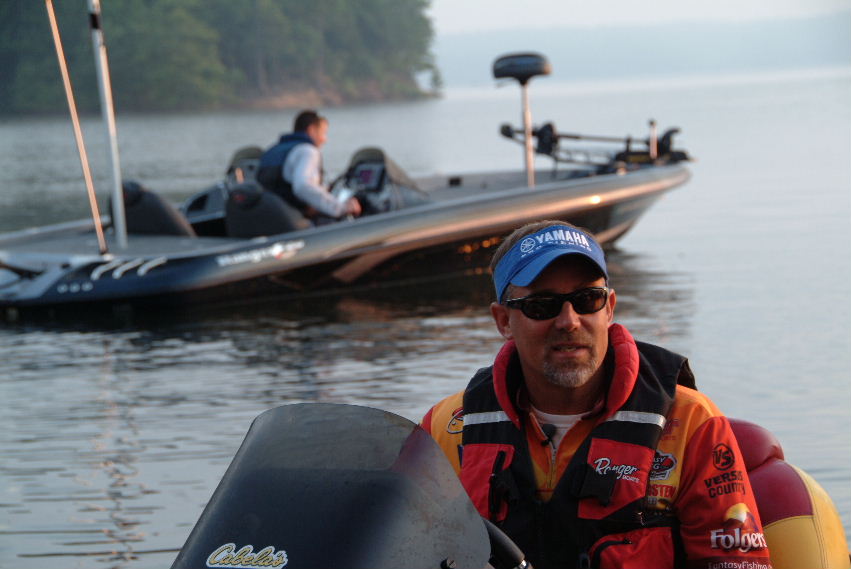 HOT SPRINGS, Ark. – After three long and hard-fought days of tournament competition, the top-five FLW Tour finalists departed Mountain Harbor Resort marina shortly after 6:30 a.m. with the full realization that a tournament title and the $125,000 top prize is now within their grasp.

For bass-fishing fans, the finals should be as compelling as any in recent memory. With the entire field separated by just a little over 4 pounds, and 20-pound stringers a distinct possibility on Lake Ouachita, the tournament title is truly up in the air at this moment.

Currently, Brent Ehrler of Redlands, Calif., leads all pros with 46 pounds, 6 ounces. But to underscore just how close this competition has become, Ehrler’s lead over fourth-place competitor David Dudley of Lynchburg, Va., is only a mere 2 pounds, 4 ounces. Throw in the fact that second-place qualifier Scott Suggs of Bryant, Ark., has already won a title here on Lake Ouachita – the prestigious 2007 Forrest Wood Cup – and it becomes even more apparent just how tightly contested the finals will be.

Even fifth-place qualifier Ishama Monroe of Hughson, Calif., has a very legitimate shot at walking away with the first-place trophy after today’s competition. And he knows it.

“I’ve had an opportunity for a 17-, 18- or 20-pound bag every day,” said Monroe. “I started yesterday with a 7-pound deficit and now that’s down to 4 pounds. Now it’s just the difference between one big bite. If I get that one bite I need in the morning, it’s on.” 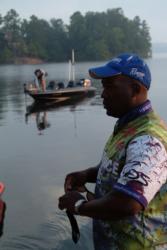 Monroe said there are plenty of variables to keep things interesting during today’s finals. For starters, Lake Ouachita is full capable of yielding a 20-plus-pound stringer – something that has yet to be accomplished by any pro this week. Secondly, there is the issue of the holiday boat traffic which could greatly affect some of the best fishing areas during the finals.

“I have a game plan I set that I was going to specifically implement just for today with all of the boat traffic,” said Monroe. “Basically I’m going to go out there and do what I do. I’m not going to change anything up. At this point, I have nothing to lose.”

Monroe, who came into the tournament sitting in eighth place overall in the 2010 FLW Tour Angler of the Year standings, said that he’s got his eye on variety of other goals as well.

“I’ve already achieved one goal of making my first FLW Tour finals,” said Monroe. “My next goal is to win. Then my goal is to win Angler of the Year and qualify for the Forrest Wood Cup. My final goal is to win the Cup. And I can do all of those things in the next few months. If I do that, who knows, maybe I’ll just retire.”

The top-five pros that survived Friday’s cut have now advanced to the fourth and final day of competition based on their overall accumulated weight. After the conclusion of Saturday’s weigh-in, the tournament title will be awarded to the pro who has recorded the most combined weight over all four days of FLW Tour competition. 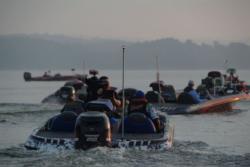 Fans will be treated to the FLW Outdoors Expo at the Hot Springs Convention Center on Saturday, prior to the final weigh-in, from 10 a.m. – 4 p.m. The final weigh-in will be held at Summit Arena. There will be a drawing for a Can-Am ATV and rod and reel combos will be given to the first 300 kids under 14 in attendance on Saturday. The FLW Outdoors Expo includes Ranger boat simulators, the opportunity to interact with professional anglers, enjoy interactive games, activities and giveaways provided by sponsors, and learn more about the sport of fishing and other outdoor activities. All activities are free and open to the public. For a full schedule of events, additional information and to register for the ATV, visit FLWOutdoors.com/chevyopen.

In FLW Tour competition, anglers are also vying for valuable points in hopes of qualifying for the 2010 Forrest Wood Cup. This year’s Cup will be in Atlanta Aug. 5-8 on Lake Lanier.

Coverage of the Lake Ouachita tournament will be broadcast in high definition (HD) on VERSUS. “FLW Outdoors” will air June 27 from 12:30 to 1:30 ET. “FLW Outdoors,” hosted by Jason Harper, is broadcast to approximately 500 million households worldwide.

Want to watch the weigh in live but can’t make it in person? Then tune into FLW Live on FLWOutdoors.com shortly before 3 p.m. Central Time to watch live streaming video and audio of today’s opening-round weigh in.

Wind: From the northeast at 6 mph