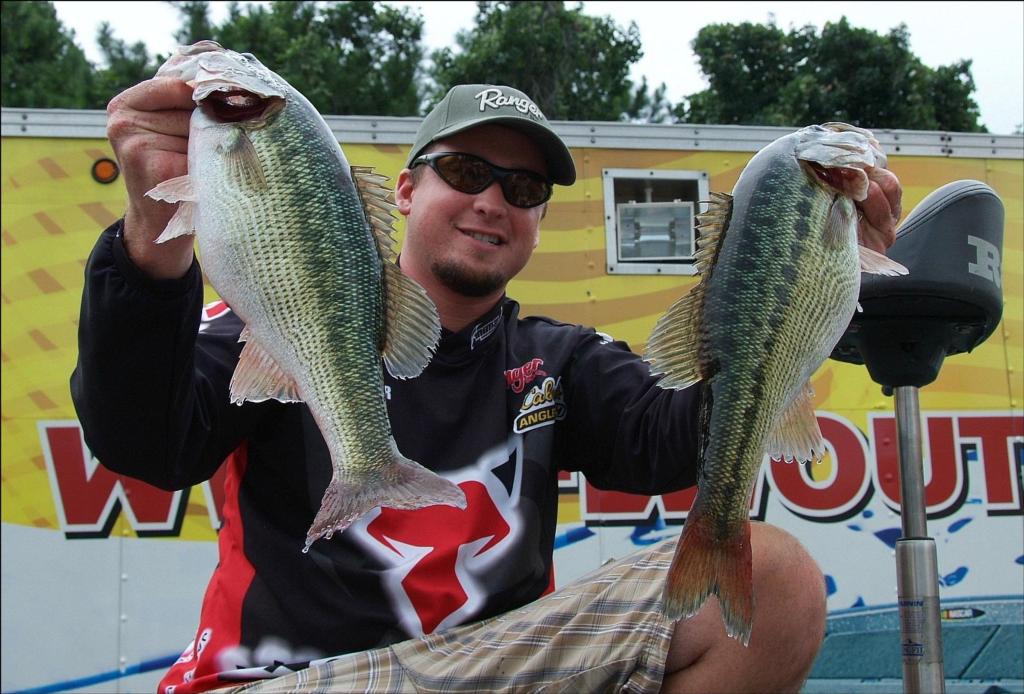 GAINESVILLE, Ga. – A quick look through the FLW Outdoors history book reveals an interesting pattern. Every other year, a young Western pro claims the Forrest Wood Cup – the richest championship in bass fishing. And at the halfway point in the 2010 Cup, pro Cody Meyer is doing his best to continue that trend.

Despite the impressive results, Meyer said day two on Lake Lanier was much more difficult. On day one, he was mostly targeting suspended fish. But on day two, he returned to some of his better areas and saw a blank screen on his graph.

“They kind of vanished,” Meyer said. “It was weird, I didn’t catch a single fish the way I did yesterday. It was the same type of stuff but they weren’t up (in the water column). I had to fish mostly new areas and all of it was on the bottom around brush. I only had seven bites and I missed two. Thank God the five that I got in were all keepers. It was brutal at times.”

Meyer finished the day with a weight of 13 pounds, 3 ounces, bringing his two-day total to 27-6.

Like most in the field, the Grass Valley, Calif., native is working a drop shot on the lake’s lower end. He is using a 1/4-ounce dropper weight, an 18-inch leader and his bait of choice is a Jackall Cross Tail Shad in baby bass color. He hooks the Shad with a No. 2 Roboworm Rebarb hook so he can fish the bait weedless through the brush.

Meyer took third at last year’s Forrest Wood Cup and felt that he let the title slip through his fingers. Numerous times this week he’s mentioned that he still thinks about that tournament every day. Clearly it’s motivating him and when you pair motivation with talent, good things are bound to happen.

“I’m stoked big time to be leading but we’ve got two more days. And I don’t really have anything saved. 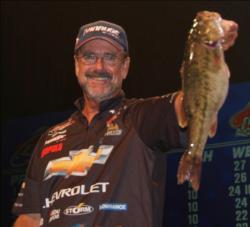 If I can put myself back in position it would be awesome.”

Just like Meyer, Chevy pro Larry Nixon felt he had a legitimate shot to win last year’s Cup on the Three Rivers in Pittsburgh, Pa. And like Meyer, Nixon has wasted no time getting back in contention. After catching a 12-10 limit on day one, Nixon caught 13-8 on day two, the heaviest stringer of the day. He finished the opening round with 26 pounds, 2 ounces.

“Today I had perfect conditions,” said the General. “We had lower light until 11 and that made a difference. They stayed shallow and they bit this morning. My goal was 12 pounds a day and I’m above that so I’m pleased.”

Nixon is being tight-lipped about the details of his presentation. He told the media this afternoon that he would reveal more at the conclusion of Saturday’s weigh-in. But every so often, he’ll make a reference to being comfortable reading his electronics and dangling a drop shot. That sounds like what everyone else is doing but Nixon curiously prefers cloud cover. If he was fishing brush, it would make more sense to want bluebird skies.

Nixon also said he had an unbelievable practice – catching quality bass at will on a Texas-rigged worm. At times it was so good that he could call his shot. And that was when the jet skis and recreational boats were out in full force on Saturday and Sunday.

“I’m just dying to win this tournament. I’ve always wanted to win the Forrest Wood Cup and I’ve been close two times, but it always alludes me. I want that trophy before I retire. It’s about the only one in bass fishing that I don’t have.” 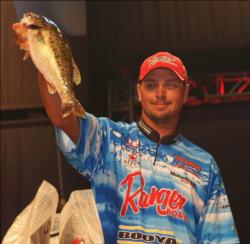 After a surprisingly good opening day, Oklahoma pro Jason Christie fell back a bit Friday. After catching 14-8 on day one, he came in with 10-9 today.

“I only had five keeper bites,” Christie said. “The fish just didn’t set up like they did yesterday.”

What Christie saw yesterday on his graph was a dome-like image of spots and baitfish surrounding a brush pile. When he comes across this scenario, the fishing has always been fantastic. But he only found one spot like that today. And it wasn’t a spot that produced any fish yesterday.

At 10 a.m., he didn’t have a keeper in the livewell. Then he found the golden dome and had a limit by 11:30. Once he left that area, he never got another bite the rest of the day.

“I probably hit 25 waypoints and fished 15 real hard. But if I hadn’t hit that one spot, I wouldn’t be standing here interviewing with you all.

“It’s weird; this is kind of like Guntersville where you look around to see where everybody else is fishing. Because you don’t want to go to a spot that has just been hammered. It’s all about finding spots that are rested and have been left alone.”

Christie is also employing a drop shot. But he’s added a little bit of power fishing to this tried-and-true finesse presentation. In other words, he’s Okie’d it.

“I use a big 1-ounce weight because as soon as I see a fish on the graph I drop it down immediately. I want it to be a reaction strike.”

Christie is adding a 4-inch Yum Dinger (watermelon) on his drop shot. If he’s around brush, he rigs it Texas style. If he’s not, he’ll rig it wacky. 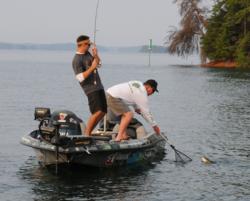 Local Gainesville, Ga., pro Jason Meninger rose from sixth to fourth on the strength of an 11-pound, 14-ounce limit. Amazingly, that sack came from only five keeper bites.

“It was a real grind, I probably caught a keeper every two hours or so. That was basically the deal. I’m happy to have a limit but I had one squeaker that I couldn’t get rid of. If that would have been a 4-pounder, I would have been right where I wanted.”

Meninger said he’s been fishing from the Chestatee River down to the dam. On day two, he spent more time in the dam area. He still visited 40 to 50 spots.

“I fished pretty much all new stuff. And I caught all my fish today on the bottom in 25 to 42 feet.”

Meninger said the key to his success is stopping on the right places at the right times and making subtle adjustments in his drop shot setup. His bait, a Jackall Flick Shake 4.8, usually stays the same. But just about everything else changes.

“I change my leader lengths, my colors, my weights – everything based on the conditions. That’s the thing about Lanier, the conditions constantly reposition and change the mood of the fish.”

From the day Lake Lanier was announced as the site of the 2010 Cup, Meninger has been focusing on first making and then succeeding on his home fishery.

“I’m in contention and that’s all you can ask. I’ll be real excited if I get to fish Sunday.” 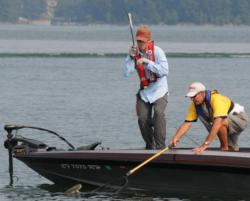 “I started out in the same creek and gave it about an hour but I just saw vacant brush piles (on his graph),” Hawk said. “I moved to some other fresh spots and found some fish, but it was mainly a struggle. I thought the bite would keep improving as the afternoon wore on but that wasn’t the case.”

Yesterday Hawk mainly used a Fish Head Spin but today all seven of his keepers came on a drop shot and a 6-inch Roboworm. Hawk said some were suspending but when he’d drop his bait down they’d follow it to the bottom.

“Today concerns me. After yesterday I was 100 percent confident, but now I’m shaking; I’m worried. I’m going to have to fish fresh water tomorrow for sure.”

When Hawk reaches one of his GPS points, he’ll line himself up and then intently stare at his electronics.

“If I don’t see any fish, I’ll make one drop right in the middle of the brush and then leave. If I see fish, then I’ll make four or five drops and work around the brush.”

“I thought running more spots would be better, but I’m kind of second guessing that right now.”

Rounding out the top 10 pros at the Forrest Wood Cup: