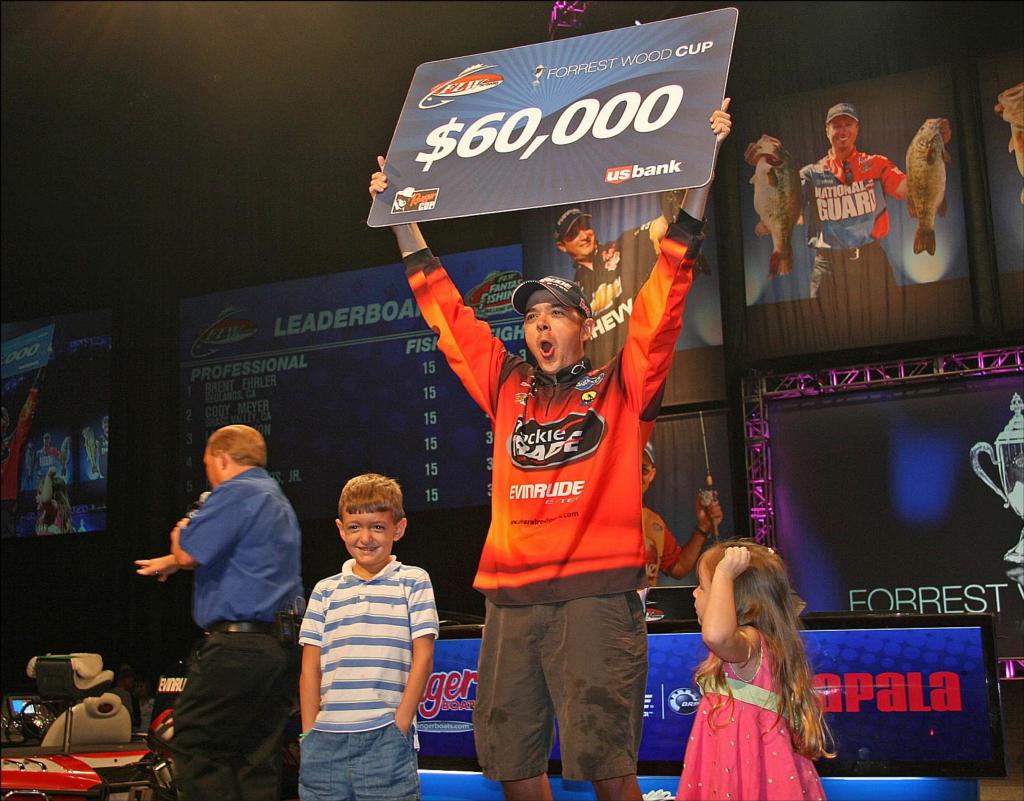 GAINESVILLE, Ga. – Dearal Rodgers had been waiting six years for his first tournament win, and achieving that special moment at the Forrest Wood Cup on Lake Lanier must have made the taste of victory infinitely sweeter.

“This is about one dollar for every morning I’ve woken my wife (April) up early, getting ready to go 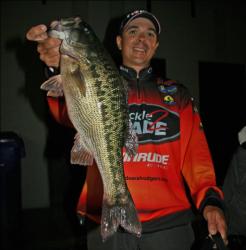 fishing,” Rodgers said. “It’s been a long time, and I’ve been trying hard.”

Patience proved to be an essential skill for Rodgers, as his victorious performance took way too long to materialize. Fishing behind ultra-efficient pro, Cody Meyer, the eventual winner found most of his productivity in the latter part of the day.

“Cody’s a really good angler, and I had to be patient,” Rodgers said. “I only had one fish by 1:30. I really stretched them out today. It was a grind – this lake is tough. But you have to have confidence in what you’re throwing.” 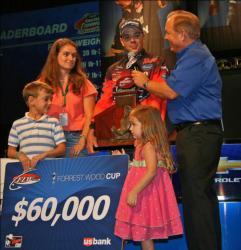 minimize visibility, he and his wife, April, took black Sharpie markers and darkened his weights. For optimal presentation with less snagging potential, Rodgers rigged his drop-shots with extra long leaders – about 3 to 4 feet was most common.

“That way, the weight would be down in the brush, but the worm would be working on top of the brush,” he said. “That was really key for me this week.”

Another important rigging point for Rodgers was his bait hooking style. He basically nose-hooked his worm, but kept the point from exiting the plastic. This afforded maximum bait action with a weedless presentation.

“As a co-angler, you have to have a better presentation than your pro,” Rodgers said. “Most of the pros are fishing Texas-rigged baits to get through the brush and it makes it difficult to catch fish behind them if you’re using the exact same thing. With nose hooking, you get a little better action and I think that helped me this week.”

Most of Rodgers’ fish came out of about 30 feet of water. “It’s tough to get a bite in that deeper water, 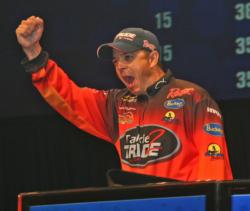 and when you get a bite, he may get in the brush and break you off. I broke two off today but I didn’t let it bother me because that’s something I can’t control.”

J.R. Wright of Truckee, Calif., led day one with 12-5 (the event’s largest co-angler bag). He stumbled on day two and caught just one fish weighing 2-8, but redeemed himself on day three with the day’s only limit – a 12-pound effort that moved his total to 26-13.

Here’s the bummer: Wright finished just 6 ounces behind Rodgers, but his day three score included an 8-ounce penalty for an expired fish. Ever the gentleman competitor, Wright showed no bitterness over 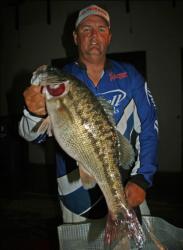 “I did my best to take care of my fish, but sometimes that happens,” he said.

Wright, the only co-angler to break 10 pounds on day three, said his pro pairing enabled him to focus on tactics with which he’s most comfortable – dropshotting.

“Today, I got to do what I love to do,” he said. “I fished with Jason Christie and he fished really slow and methodically through these bushes. I was able to keep a dropshot rod in my hand the whole day and I just slowly got the bites.”

Wright used Robo Worms in the margarita mutilator and morning dawn colors. He also employed a longer leader to entice fish suspending away from brush piles.

“My pro was concentrating on the brush, but it seemed that some of those fish would swim out from the brush and bite my bait,” Wright said. “I could feel brush a little. I was using a tungsten weight, which 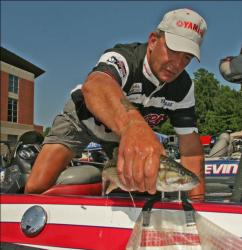 really made a difference in (sensitivity).”

Frank Divis Sr. of Fayetteville, Ark. said he had a nearly perfect tournament by converting all but one bite into catches. Unfortunately, that one missed opportunity likely levied a heavy toll.

“I fished flawlessly this week, but I lost a fish at 2:30 today that cost me this tournament,” he said. “I’m using 40-pound braided line and an 8-pound fluorocarbon leader, so I’m not afraid to pull them out of anything.

“I got a good hook set on (the fish), the rod bent over and everything was fine. Then, all of a sudden, the line just went limp. What can you say? That was the first fish I lost all week. I fished probably the best I’ve fished in 20 years.” 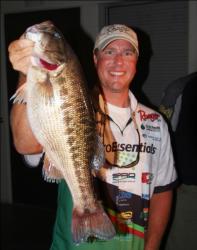 Divis’ three day total of 25-9 fell less than 2 pounds from the winning score. He’s confident that the fish he lost would have easily bridged that gap. On the upside, Divis was one of the event’s most consistent performers with daily totals of 8-12, 8-8 and 8-5.

Divis caught his fish on a dropshot baited with Zoom finesse worms in the natural light color.

Blanking on day one of any tournament is a tough setback to overcome, but recognizing the magnitude of the Forrest Wood Cup competition, Matt Peters of Gainesville, Ga. put his nose to the grindstone for the second and third days and ended in fourth place with a 19-14 total.

“Day one was tough,” he said. “I caught six short fish, but wasn’t able to get any of the quality bites I needed. I was glad to catch what I caught on the second day. I drew out with a great pro – Troy Morrow – and was able to get five good ones for 9-15.”

Oddly enough, the day three pairings found Peters again fishing with Morrow, so the established rapport and tactics allowed for an easy continuation during which Peters sacked up another 9-15. He 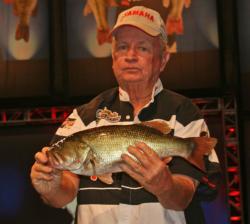 fished Roboworms on a drop-shot and a Spro Little John DD crankbait, which was custom painted by Rob Jordan of Xtreme Lure Creations.

John Niedosik of Avondale, Ariz., caught three fish that weighed 6-1 and gained one notch to finish fifth with 17-15.

Rounding out the top-10 co-angler leaders at the Forrest Wood Cup were: