Hawk circles back for storybook ending 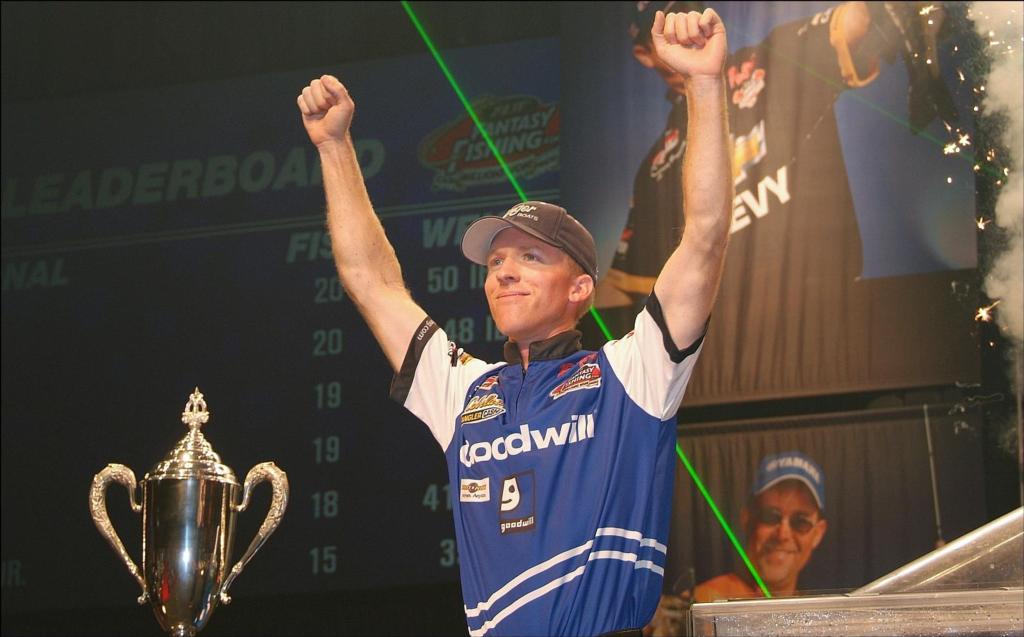 GAINESVILLE, Ga. – When Kevin Hawk qualified for the Cup back in October 2009, he knew at that moment he wanted to become a full-time professional bass fisherman. With the economy lagging and sponsorships scarce, he picked up his bags and moved from Ramona, Calif., to Buford, Ga. His goal was to win the 2010 Forrest Wood Cup on Lake Lanier and use the money to launch his career. Nine months later he accomplished that mission in front of a capacity Gwinnett Arena crowd.

On a day where none of the other five finalists reached double digits, Hawk turned in an impressive 14-pound, 13-ounce limit. That stringer, the second-heaviest of the event, sprang him from fourth to first. He finished the tournament with a four-day total weight of 50 pounds, 14 ounces.

Hawk’s comeback victory was impressive, but the back story is even more compelling.

Last fall Hawk thought he blew his chance after finishing 30th on Clear Lake, the last stop in the FLW Series National Guard Western Division. Having done the math in his head, Hawk was convinced he fell 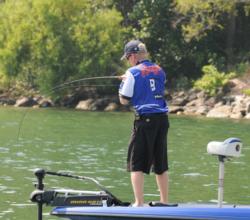 just outside of the top 20 and missed the Cup. On his drive home, pro Justin Lucas called to tell him that he made it by the slimmest of margins – finishing exactly 20th in the year-end standings. One day later, Hawk had already found a small pool house to rent and his bags were packed. For the next nine months, he practiced diligently from sunup to sundown – becoming a spotted bass disciple. Although Hawk qualified for the Cup as a professional, he fished the 2010 FLW Tour season as a co-angler. And when he wasn’t away on Tour, he was probing Lanier’s brush – spending approximately four days per week on the water.

All this extra preparation gave Hawk a sizable head start. Coming in, he knew his plan was to fish as many brush piles as humanly feasible in a given day. That number turned out to be approximately 45 to 50.

“My goal was to hit as many spots as possible,” he said. “It was a run-and-gun tournament because you usually only get one fish, if that, off each spot.”

When Hawk reached one of his many GPS points, he’d line himself up and then intently stare at his electronics. 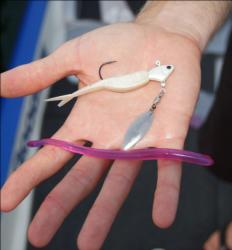 “If I didn’t see any fish, I’d make one drop right in the middle of the brush and then leave. If I saw fish, then I’d make four or five drops and work around the brush. I’d spend no more than five to seven minutes on each spot.”

Nearly all of these spots were located on the south end of the lake in between Browns Bridge and the dam. The piles he fished, which he did not plant, were located on drop-offs in approximately 25 to 30 feet of water.

The 2010 Cup was not a diverse tournament in terms of tackle. Nearly everyone in the field threw some form of a drop-shot and finesse worm. But the key difference for the top finishers was the 6-inch Roboworm. And one color in particular stood out – “morning dawn.” That’s the only color Hawk threw when he was drop-shotting.

When he saw suspended fish on his graph, he would use a 1/2-ounce Fish Head Spin with a white Super Fluke Jr. as a body. Today the Fish Head Spin accounted for three of his five keepers. Incidentally, they were his three biggest fish. 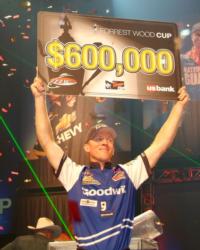 For the record, the Fish Head Spin was tied to 10-pound Trilene 100% fluorocarbon line. The drop-shot setup included a 3/8-ounce weight and a 12-inch leader on 7-pound Sunline Sniper.

“Using a heavy weight was key. You’d see the fish on your graph and you’d want to drop it down immediately and that would almost cause a reaction strike. Those fish would nose down on the bait as soon as it went by their face.”

Those that watched Hawk fish this week described him as focused and meticulous to the point where he resembled a robot on the water. Even when he was handed the Cup he remained calm and collected. But inside this stoic individual was a man who had just realized his dream.

“I’m super-happy. I might not be showing it, but I’m blowing up inside right now. I’m going to take awhile to think about this, reflect and enjoy it. Right now I’m kind of in awe still.”

Hawk, who would have earned $500,000 for his Forrest Wood Cup victory, was pleasantly surprised when T. Boone Pickens, a new equity partner in FLW Outdoors, personally contributed an additional $100,000 to the first-place purse. With that, the 31-year-old took home $600,000 for his victory.

Now that the tournament is over, Hawk’s immediate plan is to move to Alabama’s Lake Guntersville, room with Lucas and possibly start a guide service. From there, he’ll take the next few weeks to think about his tournament-fishing future – a future that looks incredibly bright. 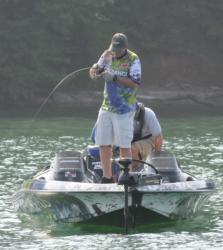 With two expired fish during the week and a 3 1/2-pounder that broke his line today, Grass Valley, Calif., pro Cody Meyer had his chances. Ultimately he finished the Cup in second place – one spot higher than he did last year on the Three Rivers.

“If everything would have gone right, it could have happened,” Meyer said. “That fish was 5 feet from the net. I got it on the surface, and it broke the line as I reached for the net.”

Using 6-pound Trilene 100% fluorocarbon, a 3/16-ounce weight and a No. 1 ReBarb hook, Meyer fished his drop-shots vertically with either a Jackall Cross Tail Shad or a Roboworm (again in morning-dawn color). Earlier in the week, the Cross Tail Shad was the better bait. But by the weekend, that trend reversed.

“The last two days, they all came on the Roboworm.”

Meyer had a few productive brush piles outside of Six Mile Creek, but most of his water was on the dam side of Lake Lanier Islands and out front of the Three Sister Islands. While Hawk mixed in new water every day, Meyer never had that luxury.

In addition, he had early-morning problems with his electronics Sunday. His transducer failed on the bow, and he had to fish blind until Lowrance responded and quickly resolved the situation.

“I should be happy with second, but you’re so close. I’m definitely disappointed.”

His consolation prize was a $100,000 check. He’s also currently second in the FLW Series Western Division standings, meaning his spot in the 2011 Cup is likely a formality. 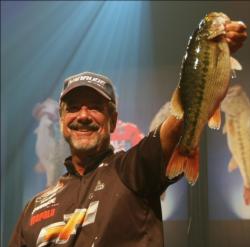 Chevy pro Larry Nixon has won just about everything professional bass fishing offers – except the Forrest Wood Cup. And for another year, that lone blemish will remain on his impressive angling résumé.

This morning Nixon went to his best spot, saw a graph that was full of both baitfish and bass, and promptly caught a 4-pounder on his first cast. But after he caught that chunky spot, he noticed the school had scattered.

“After that, I never caught another fish from that area,” said Nixon. “It is never a good sign to catch a fish on your first cast.”

While most of the other finalists fished the main lake, Nixon worked creek arms – in particular Six Mile Creek and Young Deer Creek. But he still probed the deep brush on vertical breaks (27 to 30 feet) with a drop-shot. Nixon went as far back in the creek as he could until it shallowed up. This allowed him to have water to himself, a rarity in a tournament dominated by hopping and rotating.

“I knew I couldn’t run to a hundred holes a day like some of them younger guys. But the quality was there in my areas.”

“I’m just disappointed that I had another chance and missed it. Two more of those good ones like today and I'd probably have owned the thing.”

The General said he used several worms (including morning dawn) this week, but his biggest fish came on a Berkley Shaky Worm. 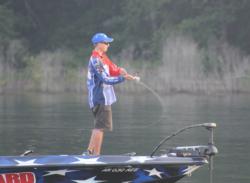 Ehrler started the day leading and was seeking to become the first pro to win two Forrest Wood Cups. But the Redlands, Calif., native knew he was playing with fire. He was only receiving a handful of bites each day, but they were usually good ones. For whatever reason, those fish didn’t bite Sunday. And the ones that did were considerably smaller. After catching a 14-14 stringer yesterday, he weighed only four today that went 7-5.

“I was really worried around midmorning. I’d been catching a couple key fish by about 9:30 each day, and when I didn’t have one at 10 [a.m.], I knew I was in trouble. When I got off the water this afternoon, I was just sick.”

Ehrler targeted main-lake brush, but he fished shallower than most. His drop-shots were hitting approximately 15 to 25 feet of water. He concentrated in the Aqualand Marina area and the stretch of water from Browns Bridge to the Lake Lanier Islands. Early in the tournament, he covered a lot of water. But the last two days he fished eight to 10 places, three of which he considered big-fish spots.

“It was weird, my fish were relating to the brush, but not on it. Everyone one of them would be about 15 or 20 feet off the brush.”

Ehrler used a Thin Senko (green-pumpkin) and a Roboworm (morning-dawn and plum berry) on his drop-shots. He said that although he wanted to win, he was happy for Hawk, a good friend and travel partner.

“I was bummed with my performance, but I was thrilled to see Kevin do well.”

Rising from sixth to fifth was Toccoa, Ga., native Troy Morrow, who earned $50,000 with a cumulative weight of 41 pounds, 13 ounces. Morrow, who qualified for the Cup as the BFL All-American champion, weighed in three bass Sunday that weighed 6 pounds, 12 ounces.

For most of the tournament, Morrow fished deep with a drop-shot. But each day he’d dedicate approximately a half-hour to throwing a Brian’s Bees Prop Bee (No. 2) in the backs of creeks. Earlier in the week, it accounted for a few key largemouths, but it didn’t produce each of the last two days.

“I had four blow-ups today, but they never ate it,” he said. “They’d just come up and slap it or jump over it.”

In addition to the drop-shot, Morrow also did some deep cranking with a Spro Little John DD.

“The drop-shot let me down today. I should have bailed on it earlier. All three of my keepers came on the crankbait. If I would have thrown it all day, I don’t know if I could have caught Hawk, but I would have at least scared him.”

Morrow’s four-month journey, which started the day he won the All-American, ended on a high note.

“I basically lived here for four months. And my goal was to make the top six. Now that I have the money banked, I’m going to fish the FLW Tour next year.”

While Morrow mixed in some shallow-water stuff, Ronald Hobbs Jr. was the only pro who made the cutoff exclusively from the skinny water. But today his pattern dried up; he received two keeper bites all day, but both came unbuttoned.

“I had two stretches of good water way up the Chestatee River in Thompson Creek,” Hobbs said. “The edges of the creek channels have a little trough that baitfish run through. And if you found something intersecting that channel, whether it was a tree or a dock, it was really good. I milked those two areas for all they were worth.”

“I made my goal. I wanted to make the top six and ride in the helicopter.”