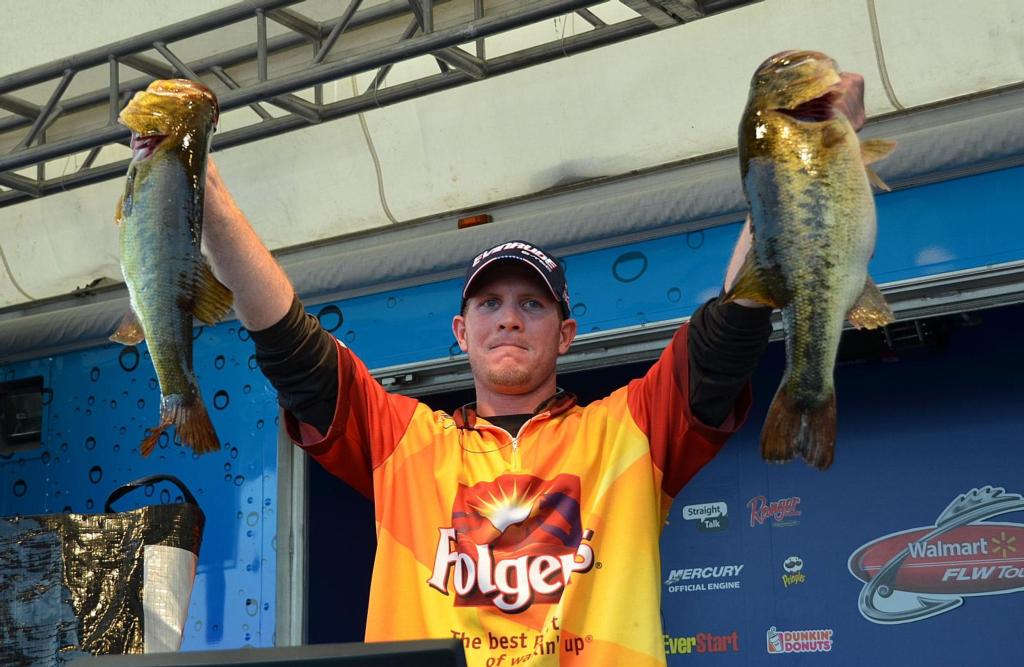 CLEWISTON, Fla. – Lake Okeechobee is back, and the bass fishing has never been better. No one knows that more than local Belle Glade, Fla., pro Brandon McMillan. Fresh off a second-place finish at the recent EverStart Series event, McMillan surpassed the coveted 100-pound mark and set the new Walmart FLW Tour record for heaviest total weight.

The win is special for McMillan for several reasons. For starters, he led the EverStart event with one day left only to slip to second. And in 2009, his father Jimmy won the FLW Series event on Okeechobee. The family now has claimed two Tour-level victories in three years on the Big O, hauling in a quarter-million dollars in the process. 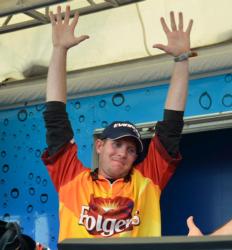 McMillan started the tournament determined to flip mats, despite the urge to sight-fish in the warm, sunny weather. The more pressure the lake received, the stronger his pattern got as the chopped-up vegetation (eel grass, cattails, hydrilla, Kissimmee grass) served as the perfect retreat for weary prespawn females. Later in the tournament he caught a few postspawn bass – meaning he worked the ideal pattern in that fish were both coming and going to the mats.

He wasn’t getting as many bites as the other finalists, but the average size was much bigger. McMillan focused on the Dyess Ditch area of the lake, located approximately 12 miles southwest of the Kissimmee River. This was the same area he fished during the EverStart event. On day one he caught 27 pounds; on day two he sacked 28-14. Yesterday he put 25-5 in the boat, and today he rallied from fourth to first on the strength of a 25-pound, 7-ounce limit.

“When I started this tournament, I didn’t think sight-fishing could go the distance,” McMillan explained. “I thought flipping was the deal, but when they whacked them like that the first two days it worried me. I didn’t know if I’d be able to catch up. I didn’t know I could win under the mats, but I thought I had enough to make the top 20.” 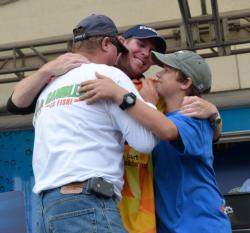 rolled in and the wind picked up – all but killing the sight-bite for pro leader Chad Prough and second-place Peter Thliveros. While the minor front made a difference, McMillan said that his experience at the EverStart event taught him how to relax and execute when the title is on the line.

“I never missed a beat today, and that’s what I’m most proud of. I got five good bites, and I put all of them in the boat.”

McMillan’s key baits this week were a black-and-blue Bruiser Intruder and a Gambler BB Cricket in river-bug color. He mainly used the Intruder, but if the mat was too thick, he’d pitch the Cricket. Both lures were tied to 80-pound Sufix braid and presented with either a 1-ounce or 1 1/2-ounce weight. His preferred rod was a 7 1/2-foot G. Loomis flipping stick.

As for his future fishing plans, the 27-year-old UPS driver is signed up for the remaining three FLW Tour Opens.

“I am going to see how I do in those and then reevaluate. But this win changes everything; I won’t have 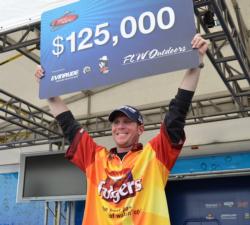 to make a house payment for many years.

“I’ve dreamed about this (winning) for a long time; I watched my dad do it. To go head to head against guys like Tharp, Morgan, Scroggins and Peter T. is just unbelievable. And to win it here, in front of everybody I know and grew up with – it doesn’t get any better than that.”

For a total weight of 106 pounds, 10 ounces, McMillan earned $125,000. He also etched his name in the FLW Tour record books next to heaviest total weight.

One of Randall Tharp’s biggest goals in bass fishing is to win at Lake Okeechobee. While Guntersville is considered his home lake, he travels to Okeechobee every winter to enter a few tournaments and sample some of the best bass fishing southern Florida has to offer. This year Tharp moved to Okeechobee early and has spent nearly two months whacking and stacking. He took fifth at the EverStart and was among a handful of pretournament favorites for the Tour event.

The title once again proved elusive, but Tharp seemed comfortable with this result. In years past, he’s lost under some unusual circumstances such as mechanical failure.

“I just wanted one of us to win this tournament,” said Tharp, who fished within sight of McMillan all week. “I would have liked it to be me, but Brandon’s a class act. If you would have told me that I 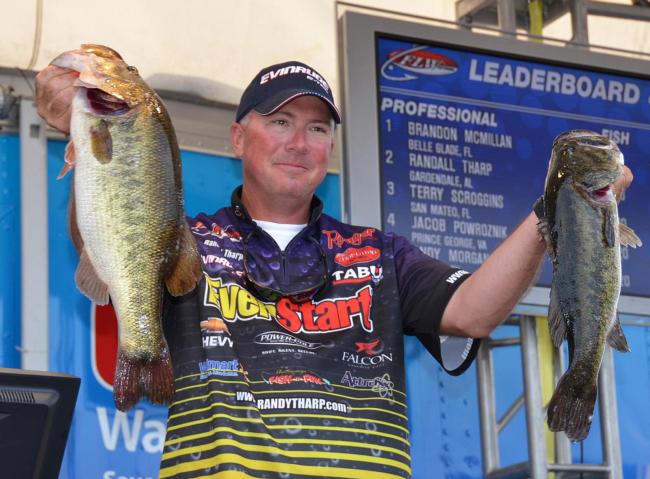 would’ve caught over 100 pounds and not won the tournament, I would have said you’re crazy. I will get my win down there (Okeechobee), there is no doubt I will.”

There is clearly a mutual respect between the two anglers. McMillan said the most nerve-wracking part of the entire week was watching Tharp stick fish. When Tharp caught his kicker Sunday, McMillan said he about puked. On day two when Tharp broke his strongest flipping stick, McMillan was kind enough to loan him one. Each angler would start on opposite sides of the 300-yard stretch and work their way to the middle, which was typically the best part of the mat. They’d meet each day at approximately 9:15 a.m. Amazingly, neither angler broke the pattern to start on the sweet spot.

“We slugged it out; I can’t describe how intense it was. I have never experienced the emotions I felt that final day. My adrenaline is still going. I really knew it was going to come down to either him or me.”

Tharp’s day-four stringer weighed 20 pounds, 14 ounces – pushing him over the century mark to 102-2. For finishing in second place, he earned $35,000. Before he heads to Beaver Lake for the first FLW Tour Major, he’ll make a detour and fish his first-ever Bassmaster Classic in New Orleans.

Tharp’s main flipping bait was the Attraxx Mystic Bug with either a 1 1/4- or 1 1 1/2-ounce tungsten weight. When he spotted a fish on bed, he would use the new Attraxx Predator Craw with a 1/4-ounce weight, a bait he specifically designed. Tharp tied 70-pound Diawa Samurai braid to the Bug, 55-pound braid to the Craw.

After catching 30-pound-plus limits each of the first two days, Prough slowly saw his bountiful 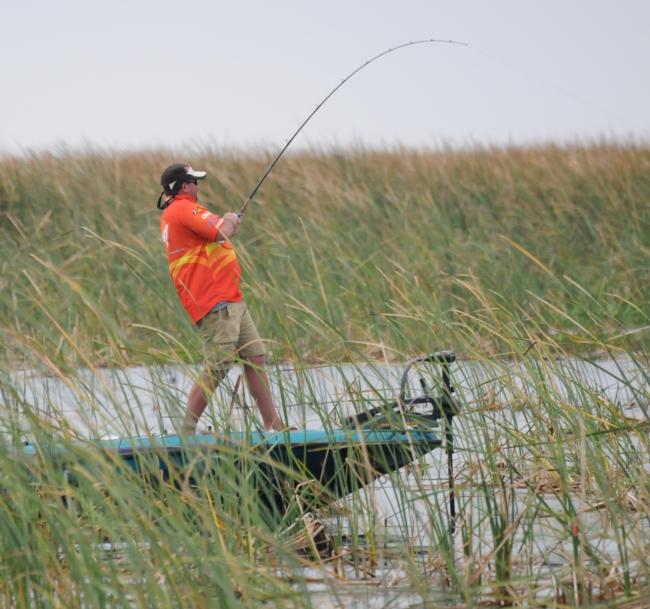 “I have no regrets,” said Prough. “These were the best four days of my life, and I gave it everything I had.”

Prough shared the Kings Bar area with Thliveros and Fred Roumbanis. As the bite dwindled, Prough performed the best among the three – an impressive feat considering this was his first Tour-level event.

“It was cloudier and windier for sure, but I think most of the females finished and left. This morning I had to resort to catching a limit of bucks. At 10 a.m. I knew it was time to vacate, and I ended up upgrading in other areas.”

Like McMillan, Prough used the Bruiser Intruder. He also mixed in a Reactions Innovations Trixie Shark as a search tool. The Trixie Shark was especially productive early in the tournament.

Terry “Big Show” Scroggins put on a big show in his first-ever FLW Tour event – catching a 12-pound, 2-ounce bass Sunday, the biggest of the four-day slugfest. He found that brute at 9 in the morning. 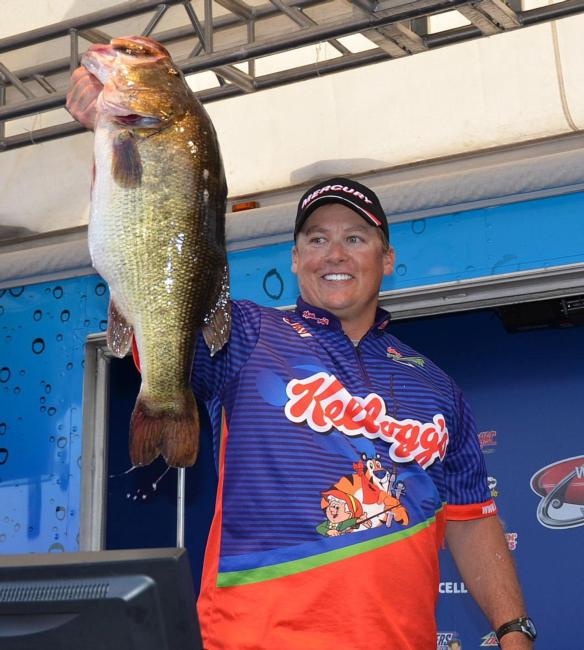 Unfortunately, he was unable to pair it with any other kickers, and his stringer weighed only 22 pounds, 1 ounce. Scroggins finished the tournament with 99 pounds, 9 ounces – earning $25,000.

Like many, Scroggins employed a two-pronged approach. His search bait was a Smithwick Devil’s Horse, which was particularly effective because he could stop it over a bed and it would retain its position. In contrast, some of the more popular swimbaits like the Skinny Dipper and Big EZ sink when paused.

“I nicknamed the Devil’s Horse the donkey, because you fish it slow and steady. A lot of times they just roll on it, but then they’ve shown themselves and I could pitch back to it.”

Once he had a female located, Scroggins would employ a Yum Money Craw (molting-craw color).

“I had three 7-pounders saved for today, but they must have swam off over night.”

Scroggins’ primary area, located near the mouth of the Kissimmee River, was shared earlier in the week with 11th- and 12th-place pros Glenn Browne and Trevor Fitzgerald.

Each of the last two days, Duracell/Gillette pro Jacob Powroznik covered so much water in search of 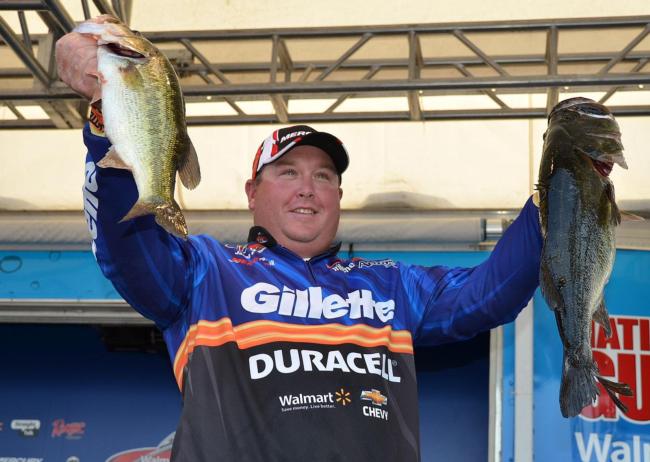 spawning bass that his trolling-motor batteries died. It was a pattern he committed to from the start, and instead of focusing on open areas, he pushed his boat back into thick reeds and hydrilla. He focused his efforts on the north end of the lake, up around Horse Island.

On day four the Prince George, Va., native caught a limit worth 18 pounds, 2 ounces – by far his lightest sack of the week. His lone kicker Sunday weighed 7 pounds, 13 ounces and fell to a Gambler Big EZ swimbait. Powroznik’s four-day cumulative weight registered 95 pounds even, good enough for fifth place and $20,000.

“I caught 95 percent of my fish this week on a new Attraxx bait I designed called the Jacobug,” said Powroznik. “The best color was watermelon-red, but I also used white.

“Today might have been a different story if the weather had been different. The clouds and wind made it much harder to sight-fish. Where I was fishing, there was 4 feet of water. They were spawning underneath the hydrilla, and you had to look under there, which was tough without the sun.”

Rounding out the top 10 pros at the FLW Tour event on Lake Okeechobee:

The next FLW Tour event is slated for Beaver Lake in Rogers, Ark., March 3-6, the first of six Majors.