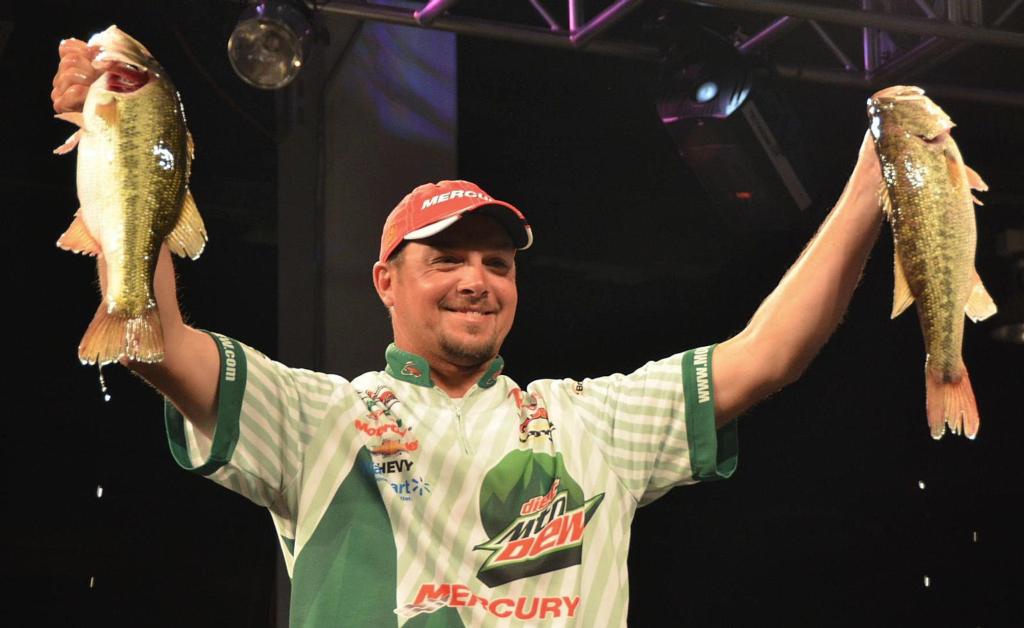 GREENVILLE, S.C. – Many professional anglers go their entire career questioning if they’ll ever win a tour-level bass tournament. But for Jason Christie, a fisherman of immense talent, it was never a question of “if” but “when.” When turned out to be the third Walmart FLW Tour qualifier of 2011 on Lake Hartwell.

Four times in his career Christie has led an FLW Tour event, only have to have it slip away for one reason or another. In 2009, he led the Beaver Lake tournament heading into the final day only to fall to fourth. But Christie never doubted his breakthrough win would come and neither did those who know him well.

Although he had never previously visited Lake Hartwell, Christie immediately liked what he saw – especially the backs of the creeks that contained what he called “Oklahoma water.” The best water he found in practice was located in Beaver Creek. It was dirty, extremely shallow and had a ditch running through it. And it proved to be the perfect place for the largemouths that are staging and spawning.

“One of the reasons I picked that creek was it had the most feasible water and it was landlocked with riprap, which allowed it to heat up faster,” said the Diet Mountain Dew pro. “So you’re going to have some prespawn fish, some fish that are spawning and maybe some postspawn fish. I mean, they’re going to spawn in there for another month. It’s just a big area with some really big fish. And it looked like Wolf Creek back home on Grand Lake.”

During the first two days of the tournament, those big fish showed up in bunches as Christie sacked over 20 pounds both days. But things got tougher the last two days and the Park Hill, Okla., native almost abandoned his honeyhole on day four.

“I made an entire pass through my best stretch of water this morning and I didn’t get a bite. I was on the 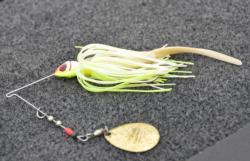 verge of leaving. Then I moved off the bank a bit, across to a little half-moon – a little notch in the bank that has a deep cut that runs into it and caught my first fish and that told me to stay. You don’t know how close I was to leaving. And if I would have left it wouldn’t have been good. I just settled down and that’s the wisdom you get the older you get.”

From there, the fish came much easier and Christie finished the day with 14 pounds, 13 ounces. His main lure this week was a 1/2-ounce Booyah spinnerbait (white and chartreuse) with a single gold Colorado blade. On day two, he sight-fished three of his keepers with a Yum F2 Mighty Bug. Christie tied these baits to 25-pound Silver Thread fluorocarbon.

“The wire on that spinnerbait is light, so when you throw it, it has the same thumping vibration as a Boogie Bait. And the fish like that vibration, especially this time of year.”

While he had the right bait, Christie’s stealth approach was crucial. In addition to making long casts, he would turn off his electronics and put his Power-Poles down for long stretches.

“It was super shallow and the fish were spooky so the key was not putting the boat on top of them.”

With a total weight of 70 pounds, 11 ounces, Christie won the tournament wire-to-wire with a 10-pound 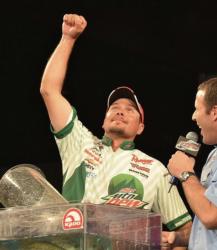 margin. Of his 20 weigh fish, all were largemouths and all but four came from Beaver Creek. The others came from Shoal Creek.

“People don’t realize how hard it is to win a four-day tournament. And it’s not done very often out of one area. After the second day I had come in with two big bags and I still had to catch them two more days to win. There’s a lot of pressure leading wire-to-wire, no doubt. But I felt like I coped with it better today than I have in the past.”

Christie earned $125,000 for the win and he now has victories at FLW Outdoors’ three different circuit levels – the Bass Fishing League, EverStart Series and FLW Tour.

“This win goes to the people who support me back home in Oklahoma,” said an emotional Christie. “They’re sitting there watching me right now – my wife, my kids, my parents, uncles and friends.”

Being an ultra-competitive angler, Brent Ehrler never likes finishing runner up. But this was one second-place finish he could handle.

“I’m ecstatic,” said the Redlands, Calif., native. “I had no chance to catch Christie at all. It almost feels like winning the tournament for me. I was just looking to move up today.” 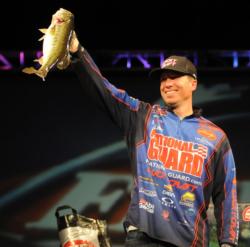 Ehrler fished different patterns and different water each day of the tournament. He started on day one by sight-fishing and making casts to bass suspended under docks. Later in the day he also mixed in a jerkbait. On day two, he had a few sight-fish left then got on a real strong pattern skipping a weightless wacky-rigged Senko way under docks.

That pattern completely died on day three, but Ehrler discovered a new, bizarre pattern. He noticed that as he pushed his trolling motor pedal, the commotion of the prop caused the bass to rise up. Ehrler believes the movement of the water perhaps resembled that of a school of blueback herring. Once they came up, they’d follow his Yamamoto Kut Tail worm and shaky head all the way down to 15 feet and eventually eat it. In addition to this off-the-wall pattern, Ehrler threw a Swimming Senko.

On day four, he fished the wacky-rigged Senko and shaky head/Kut Tail worm combination. His key areas were the three major creeks near the dam. True to his western roots, he preferred the clearer water.

“This was an interesting tournament in that I caught almost all my fish in areas I never practiced. I was just fishing new water every day and that’s really nerve-wracking.”

Ramie Colson Jr. continued his steady ascension up the leaderboard Sunday. With a 14-pound, 4-ounce limit, Colson rose from sixth to third. He finished the tournament with 59 pounds, 4 ounces, 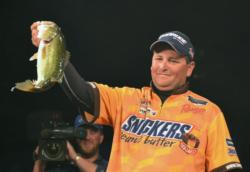 earning $30,000. For most of the week, Colson fished near Christie in Beaver Creek. While Dan Morehead and Christie shared one side of it, Colson had the other side pretty much to himself.

“My side was flatter; his side had a ditch running through it which brought in more fish,” explained Colson. “But I really didn’t have to share any water.”

Colson started each morning throwing a wacky-rigged Zoom Trick Worm (green pumpkin magic). He would slide a nail weight into the worm to give it extra action and throw it around clumps of stickups.

“Later in the afternoon the fish would get more active and I’d throw a 5/16-ounce War Eagle spinnerbait in white and chartreuse. The Trick Worm was almost guaranteed to get me a limit, but the best quality came on the spinnerbait.”

While Christie thought most of the fish in Beaver Creek were spawning, Colson wasn’t so sure.

With the bite slowing and Christie looking to seal the deal Sunday, Colson ran to Shoal Creek and ended up catching his best three fish there.

“I climbed each day of the tournament so I’m pleased. And I never lost any fish that hurt me.” 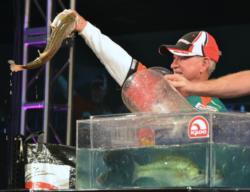 Stacey King wasn’t particularly excited about his chances of catching a big bag on day four. He was worried the cooler temperatures combined with overnight thunder and lightning would push his shallow-water spawning fish off the bank. But King still caught 12 pounds, 1 ounce Sunday, which pushed his total weight to 57 pounds, 10 ounces.

“For most of the week, I threw a Zoom lizard (black) and a Chompers Salty Sinker (green pumpkin candy) in the stained water,” said the Reeds Spring, Mo., pro. “I fished them Texas-rigged with a 3/16-ounce slip sinker. But today I caught two of my biggest fish on a ChatterBait.”

King fished a handful of creeks in the Tugaloo River, including Gum Log and Eastanollee.

For fourth place, he earned $25,000. But most importantly, King shares the Angler of the Year lead with Thrift with 396 points apiece. And with a Tour qualifier on Table Rock, his home lake, left on the schedule, King likes his chances.

“It’s a long road, there’s no doubt about it. But I really feel good about the way I’m fishing.” 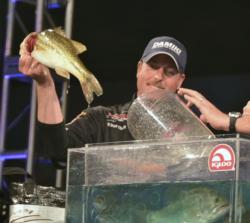 Thrift’s attempt to win back-to-back qualifiers came up just short as the Chevy/Damiki pro finished in fifth. Thrift found a great area – a riprap bank around a bridge in Gum Log Creek. He pounded this shallow-water staging area with crankbaits – primarily a Damiki DC 100 in real shad color. And while the area was good early, it slowly depleted and Thrift didn’t know where else to turn.

“There was one rock on that stretch that I made repeated casts to,” said the Shelby, N.C., native. “I bet I caught over 40 fish on that one rock on the first day and a bunch of big ones on the second day. If they ever drop the water down, I have about $150 worth of crankbaits on it.”

“I really stubbed my toe the first day when I dumped a couple big fish.”

Rounding out the top 10 pros at the FLW Tour event on Lake Hartwell:

The next FLW Tour event is slated for Lake Chickamauga in Chattanooga, Tenn., April 14-17, the third of six Majors.