Wrapping it up on the Red 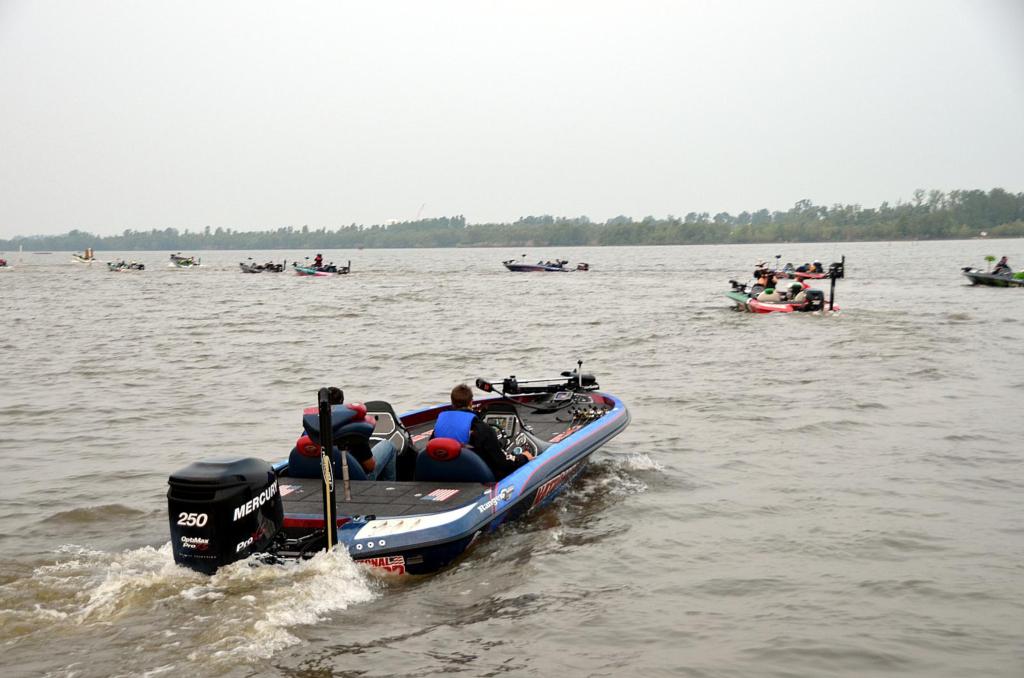 SHREVEPORT/BOSSIER CITY, La. – As the final day of the fifth FLW Tour event of the 2011 season (fourth Major) began Sunday morning, John Cox might have seemed like the Gingerbread Man to nine of the 10 finalists: uncatchable. But if this event is to have a fairy-tale ending for the Debary, Fla., pro, he is undoubtedly hoping there isn’t a fox in the field to catch him at the Red River.

Right now, the pro with the best chance of assuming that role is Tifton, Ga., pro Clint Brownlee, but he’ll need to overcome an 8 1/2-pound deficit to snap up the win. And the stakes are high for both Cox and Brownlee: victory would mean a six-figure payday and a first Tour win for either competitor. 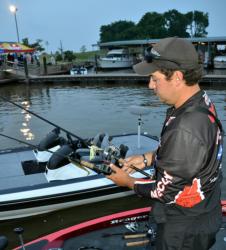 But there’s a lot of talent among the 10 finalists – including a former Angler of the Year, Forrest Wood Cup champions and Tour veterans – so this event isn’t over until the last largemouth bass is weighed.

Cox fished in Pool 4 the first two days of the event in a small backwater area he could only access by forcing his stripped-down aluminum boat through a shallow culvert; on Saturday he stayed upstream in Pool 5, fishing a secondary spot after finding the shallow spawning area he had hoped to fish occupied. But he also found a new area that yielded a nice fish and offered another good one that he lost, so he plans to revisit it today.

“I can get in that hole, but I don’t know if I can get out,” Cox said of the initial area he had hoped to target yesterday (he is also fishing out of a heavier boat today). “Today I’m just fishing lily pads and just throwing spinnerbaits and a frog [as well as a swimbait rigged on a jighead].”

Brownlee, on the other hand, has stayed true to his primary spot in Pool 5 all week and plans to return there today. It is a backwater area about two miles south of the Red River South Marina on the east side.

“I’ve just got to get two or three good bites … as far back as I am, hopefully four today,” he said, adding that he has managed at least one good keeper per day so far. “If I get a little lucky, it could be interesting.” 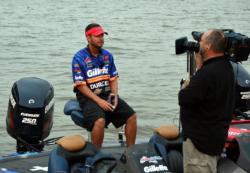 Brownlee likes the overcast conditions forecast for today as his go-to bait this week has been a buzzbait fished on top. He hopes the water level stays up today to keep his bass in the grass, because if it falls like it did Friday, he’ll need to attract a strike with the buzzbait, but then close the deal with a worm on a second pass – essentially doubling the time it takes to land each keeper.

The point tally is unofficial at this time, but it appears that Castrol pro David Dudley of Lynchburg, Va., will take over the lead in the FLW Tour Angler of the Year race as of the conclusion of this week’s competition. The 2003 Forrest Wood Cup champion and 2008 AOY has positioned himself as the frontrunner in this year’s race after making the top-10 cut on the Red River.

How many points he earns will be determined by his ultimate place finish today, but he will have enough to climb two slots to No. 1 in the FLW Tour standings. If he can capture the AOY title again this year (with one Major left in the season still to go), he would add another $100,000 in prize money to his more than $2.5 million in career earnings with FLW Outdoors. 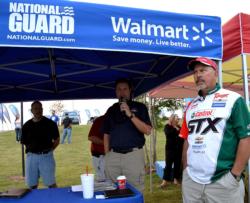 Hosted by the Shreveport-Bossier City Regional Sports Authority, this week’s Walmart FLW Tour Major, presented by OFF!, offers a top award of up to $125,000 cash in the Pro Division.

In FLW Tour competition, anglers are also vying for valuable points in hopes of qualifying for the 2011 Forrest Wood Cup presented by Walmart, the world championship of bass fishing. This year’s Cup will be in Hot Springs, Ark., Aug. 11-14 on Lake Ouachita where they could win as much as $600,000 – the sport’s biggest award. Anglers are also vying for the prestigious 2011 Walmart FLW Tour Angler of the Year title that will be determined by the most points accumulated over the six Tour Majors.

Sunday’s final weigh-in will be held at the Shreveport Convention Center located at 400 Caddo St. in Shreveport beginning at 4 p.m.

Fans will be treated to the FLW Outdoors Expo at the Shreveport Convention Center on Sunday from noon to 4 p.m. prior to the final weigh-in. The first 300 kids 14 and under will receive a free rod and reel combo compliments of KTBS 3. Fans can also register to win a Can-Am ATV courtesy of Kiss Country 93.7 and 99X which will be given away following the final weigh-in. The Expo includes Ranger boat simulators, the opportunity to interact with professional anglers, enjoy interactive games, activities and 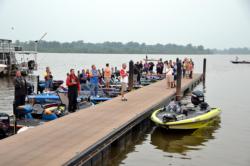 giveaways provided by sponsors, and fans can learn more about the sport of fishing and other outdoor activities. All activities are free and open to the public.

Get reports throughout the day on competitors’ progress via FLWOutdoors.com’s On The Water Updates brought to you by Chevy. For bass-fishing fans unable to attend the weigh-in festivities in person, you can catch all the action live at FLWOutdoors.com with FLW Live. Show time starts at 4 p.m. Central today.

Coverage of the Red River tournament will be broadcast in high-definition (HD) on VERSUS. “FLW Outdoors” will air June 26 from 1 to 2 p.m. ET. “FLW Outdoors,” hosted by Jason Harper, is broadcast to more than 500 million households worldwide.