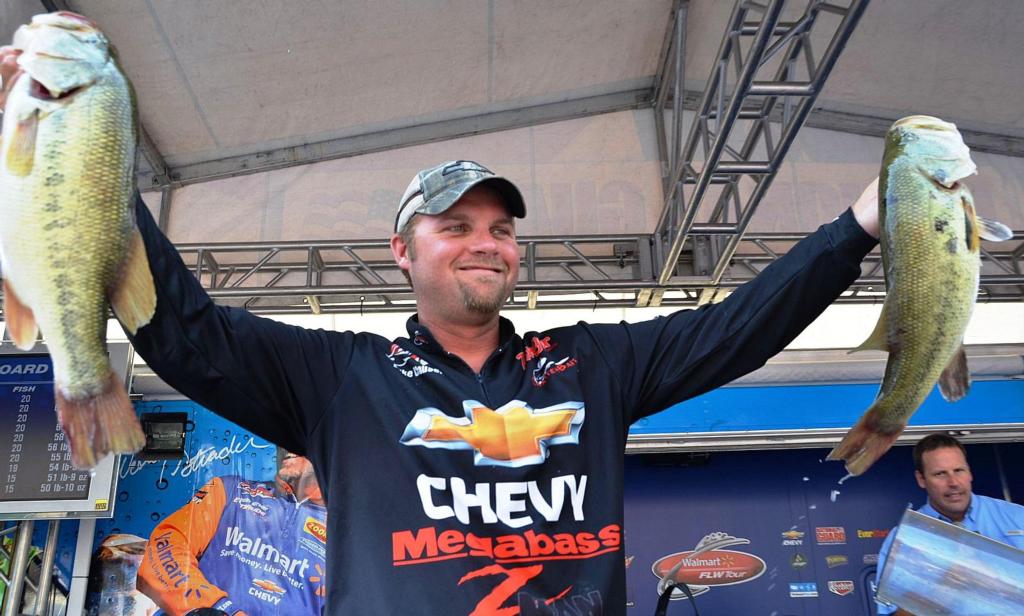 NATIONAL HARBOR, Md. – From 2004 to 2006, Luke Clausen of Otis Orchards, Wash., was living a dream. During that magical period, Clausen accomplished something that very few anglers in the history of professional bass fishing had ever achieved – he won both the Forrest Wood Cup and the Bassmaster Classic. At the time it seemed that the sky was the limit for the young gun from Washington. But then things changed. Suddenly, Clausen found that duplicating his earlier success was nearly impossible.

For the next five years, Clausen struggled to live up to his own expectations – failing to win any tournament of major significance. But as Clausen headed to the Potomac River, unbeknownst to him, his luck was about to change. 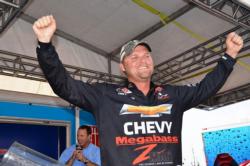 While fishing icons like Larry Nixon, Bobby Lane and Michael Iaconelli dominated the headlines over the first three days of FLW Tour Potomac River competition, Clausen was quietly putting together a fishing clinic of his own. However, before departing National Harbor marina on the final morning takeoff, even Clausen had expressed some doubts about his chances.

“Honestly, I’m still figuring things out,” he said. “I could wind up with five big bites today or I could end up with zero. I really don’t know what’s going to happen out there today.”

But what happened out there today was that Clausen, with everything on the line and five years of frustration resting on his shoulders, turned in one of the greatest performances of his career. Walking up to the weigh-in stage, Clausen produced a staggering limit weighing in at 19 pounds, 4 ounces – a full 2 pounds more than any pro to weigh-in that day.

“Coming back to weigh-in I was just hoping for second place,” said Clausen. “But when I saw the scales say 19 pounds, I almost fell over backwards. I never would have guessed I had that much weight. As it turned out, my two big fish were a lot bigger than I thought they were.” 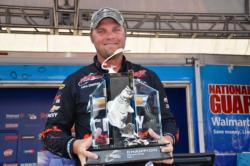 As a result of his four-day, 69-pound, 14-ounce catch, Clausen was finally able to knock the monkey off his back, winning the tournament title as well as a whopping first-place check totaling $125,000.

“In 2006, I was on a high of all highs,” said Clausen. “But it’s been frustration ever since. So for me it’s a huge relief to have won this tournament more than anything. If people really knew how hard we work, how we put in 12 and 14 hour days, they’d know what this means to me. Finally all of this work paid off.”

Clausen said the key to his success was his discovery of a 500- by 300-yard area housing a variety of barely submerged specialty grass.

“I wound up fishing a lot of emerging coon tail grass,” he said. “I don’t think anybody in the tournament was trying to fish it because it was really hard to see. I found that area in practice and it was so good I just decided to stay there all tournament. That area had a lot of big fish – a lot of 5-pounders. So I knew it had the type of fish to win.” 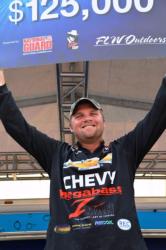 Clausen said he continued to fish both inside and outside the grass edges all four days – moving deeper and shallower depending on the state of the tides – with a combination of swim jigs and Z-Man finesse worms.

“Fishing that area was a real grind,” he said. “You either caught 4- or 5-pounders or 2 1/2-pounders – there wasn’t a whole lot in between. But I knew if everything went exactly right on the final day, I could catch a big limit.”

And wouldn’t you know it, that’s exactly what happened.

Although day-three leader Michael Iaconelli of Pittsgrove, N.J., seemed almost destined to win the Potomac River event after climbing the standings each and every day, “Ike” came up just short in the end. Although Iaconelli was gunning hard for the victory in his “second hometown,” his 16-pound, 8-ounce stringer ultimately couldn’t compete with Clausen’s monster sack.

While certainly disappointed with the final outcome after being so close to winning a tournament title, Iaconelli was philosophical in defeat. 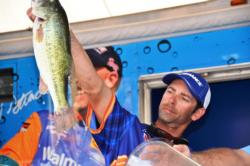 “It was a good week,” said Iaconelli, who boated a four-day total of 68 pounds, 1 ounce to win a second-place prize of $35,000. “I really feel good about my performance. In the end, my main grass spot didn’t produce like I needed it to.”

According to Iaconelli, another major factor in today’s outcome was the surprising appearance of a “flood tide.”

“A flood tide is a natural occurrence and it’s basically a higher-than-normal tide,” he said. “Usually it’s caused by a full moon, which we didn’t have, or by wind, which we didn’t have. But sometimes there are weather conditions far offshore than can cause it as well.”

The end result was that it significantly affected Iaconelli’s prime grass areas. Consequently, the New Jersey native was forced to scramble around a little more than he’d hoped.

“It was a tough tournament,” he said. `I ran around a lot today. I hit a lot of different hard targets (wood, docks, laydowns). And I tried to stay fresh and think on the water as the day went along. But I couldn’t get the bigger bites I needed. I don’t want to say the flood tide messed me up, but I really needed one more big bite. That’s just how it goes sometimes.”

Iaconelli said he fished hard cover with a combination of black Berkley gripper jigs and black Shakey Head worms with Hopper Bottom trailers. For his grass areas, his primary bait was a vibrating Molix Lover jig in black and blue equipped with a Berkley Havoc trailer. 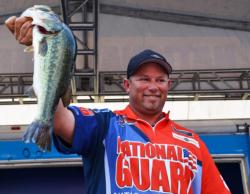 Bobby Lane of Lakeland, Fla., headed into the finals in third place and that’s where he ultimately finished, parlaying a four-day total catch of 65 pounds, 5 ounces into $30,000 in winnings. Although he’d hoped for victory and was fishing for nothing less, he was gracious with his final standing.

“I really love this place. I love fishing the Potomac River,” he said. “All of these anglers in the top 10 are just amazing anglers.”

For the majority of the week, Lane said that he attacked the Potomac River by flipping a variety of self-designed Berkley Havoc soft plastics baits including the Craw Fatty and Pit Boss. Lane also said he used 65-pound Spiderwire with weights ranging from 1 to 1 1/2 ounces.

“Figuring out that exact tide on the right day was very important,” he said. “I was basically flipping matted grass all week. Today, I had a good bite in the morning but then things slowed down for a little bit. But when the tide came back up this afternoon, my bite really picked up.

“I love to flip and that’s been the key to my success,” Lane continued. “But when you get in that grass, you never know what’s going to happen.”

Bryan Schmitt of Deale, Md., finished the Potomac River event in fourth place. But had the contest been decided over fan support, Schmitt would have won hands down as the local crowd was clearly pulling for the Maryland native at every turn. 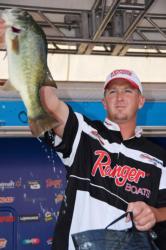 “I feel very honored to have fished with these guys today,” said Schmitt, who produced the second-largest stringer of the day at 17 pounds, 3 ounces, hearing roaring approval from the highly partisan crowd as each and every fish was placed upon the scales. “I really appreciate my friends and family coming out. I just wanted to make everyone proud.”

Without question, he did. Competing against some of the biggest names in professional bass fishing, Schmitt more than acquitted himself. With a fourth-place finish and $25,000 in prize money to his credit, Schmitt now boasts 12 top-10 FLW Outdoors finishes on the Potomac River – a staggering level of success by any measure.

And if things had gone a little differently, he just might have walked away with a tournament title.

“The wind during those first two days killed me,” said Schmitt, who ultimately recorded a total four-day catch of 64 pounds, 12 ounces. “But I’m blessed to be here. I had a fantastic week.” 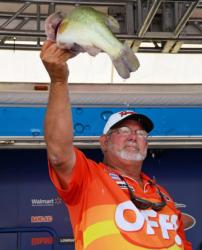 “Today started out real slow for me. I had no fish in the boat until 8:30 a.m.,” he said. “I wound up catching my first big fish at about 11:30 and then I caught a couple more good fish in a row after that. The tide really didn’t affect me too much. I fished one spot about 150 yards square and kept going back there all week.”

Williamson said he caught all of his fish on a Spot Remover and Shakey Head Senko in a watermelon color with a ¼-ounce weight.

For his efforts, Williamson took home a nice check totaling $20,000. 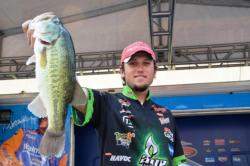 Rounding out the top-10 finalists: