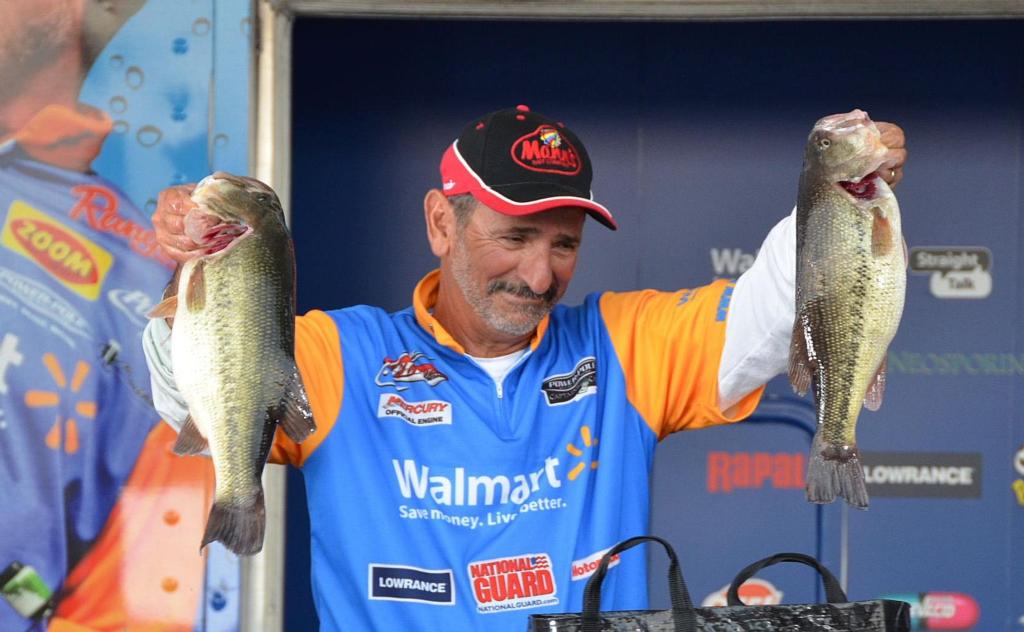 GUNTERSVILLE, Ala. – As a noted structure fisherman, Paul Elias has always had a special connection with Lake Guntersville. But this week he discovered a new technique to ignite its plentiful, yet largely dormant population of largemouth bass. And in doing so, he completely dominated the final Walmart FLW Tour event of the season in wire-to-wire fashion.

After three days of practice, most pros felt like this would be one of the toughest Guntersville tournaments ever. Winning weight predictions hovered anywhere from 50 pounds on the low end to 70 pounds on the high end. Thanks entirely to the Alabama rig, that all changed.

When a new presentation dominates in such a fashion it causes the entire bass fishing community to respond. In short, the demand for the Alabama rig is sky high, mostly due to Elias. For those new to the 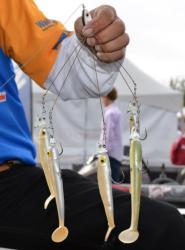 mayhem, the Alabama rig consists of a hard-bait body that trails five wires that have a swivel attached to the end of each wire. Elias started the tournament tipping his rig with Mann’s HardNose Swimshads but ran out and had to use several swimbaits. With heavier 3/4-ounce jigheads, he’d use 6 1/2-inch swimbaits and with 3/8-ounce jigheads he’d use 5-inch swimbaits. The chandelier-looking concoction was heaved on a 7-foot, 11-inch Pinnacle flipping rod, a Pinnacle reel and 65-pound-test Spiderwire Ultracast FluoroBraid line.

The idea behind the presentation, which mirrors a smaller version of the saltwater umbrella rig, is to mimic a school of shad. In the fall, that’s precisely what the Guntersville giants prey on.

“The majority of the fish in this lake are suspended right now and that’s why everybody was struggling early on,” Elias explained. “I’ve been an offshore fisherman my whole career and I’ve always struggled when they suspend too. But this new rig is just incredible.”

The Laurel, Miss., pro said that most of the fish were positioned 5 to 10 feet off the bottom.

“They absolutely would not bite it on the bottom. The whole key to this tournament was knowing how to count it down to keep it in the zone.”

While Elias was the most effective angler, his win wasn’t just about the A-rig. He also found two giant schools of bass, located around causeways and bridges (Spring Creek Bridge). While he caught some fish near the pilings the key areas were ridges and quick-dropping points around current that was causing the fish to stage to ambush shad. Elias positioned his boat in 25 to 40 feet of water and was catching fish in 20 to 30 feet. On the tournament’s first day, Elias caught all his fish in 15 feet or less. Day two was when he figured out the deep pattern. 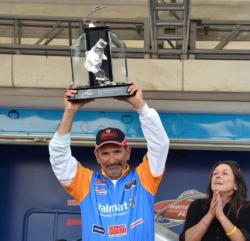 On the final day, Elias calmly put the finishing touches on an unforgettable week – catching his fourth consecutive stringer over 20 pounds – this one going 23 pounds even. With a total weight of 102 pounds, 8 ounces, his margin of victory was a staggering 17 pounds. He missed the four-day cumulative FLW Tour weight record by just 4 pounds. Consider that record was set during the spawn on Lake Okeechobee, while this event was held during perhaps the toughest time of the year.

“It was crazy. I would throw everything a bass pro would normally throw at these fish and I wouldn’t get a bite. Then I’d throw that Alabama rig and I’d catch one immediately. Those fish were there the entire time and that rig absolutely transformed this fishery.”

For his second FLW Tour win, the 60-year-old Elias earned $100,000. But more importantly, he got his long-coveted Guntersville victory.

“This is one awesome lake. I’ve had some great Octobers on this lake and I had been wanting a win on it for a very long time.”

If not for Elias, the talk of the tournament would be Hoover, Ala., pro Bob Behrle, who was also one of the first to discover the A-rig. After a rough start to his rookie season fishing the FLW Tour Opens, Behrle considered dropping out of the Guntersville event. But he kept the faith and the rest is history. 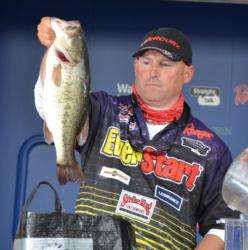 While Elias had several offshore spots and was whacking fish non-stop, Behrle averaged only eight keeper bites each of the first two days. He also only had one offshore spot – a flat off a ledge located within sight of the takeoff location at Lake Guntersville Resort State Park. The flat rose from 25 feet of water to 15 and the sweet spot was a series of stumps on a hump. While he caught 18 fish there Saturday, he essentially depleted it.

“That spot replenished every day but today,” Behrle said. “I only caught one 4-pounder off it.”

Thankfully, he had a backup grass-line spot near his offshore honeyhole.

Behrle’s day-four stringer weighed 20 pounds, 6 ounces, bringing his combined weight to 85 pounds, 5 ounces. He used 3 1/2-inch Storm swimbaits with 1/4-ounce weights on his Alabama rig, which he tipped with small blades – similar to a Fish Head Spin. Behrle explained that his swimbaits were not of the paddle tail variety, instead resembling more of a grub. While others varied retrieve speeds, Behrle ever-so-slowly wound it in and kept the baits close to the bottom. The 51-year-old earned $34,021 for his first FLW Tour top-10 finish.

“I came here just trying to cash a check and I finished second to a legend. I had a great week with no regrets.” 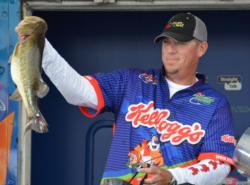 Lane up to third

Although Russell Lane roomed with Elias, the pro winner didn’t clue him in on the Alabama rig phenomenon until after the second day. Once he got the memo, the Prattville, Ala., pro proved to be a quick study. The last two days Lane caught limits worth 19-15 and 24-5 to finish with a cumulative weight of 74 pounds, 4 ounces.

“Early in the week I was flipping a Big Bite Yo Daddy and I was cranking a Spro Big Daddy,” Lane said.

Once he was on to the A-rig, Lane used 3/8-ounce Buckeye JWill swimbait heads and Cane Thumpers. Like many others he eventually ran out of his original baits and tried other swimbaits with equal success.

“I had three good places, but my best spot today was in 25 feet of water. I’d roll the rig about 10 feet down and they would come up and get it. They would eat anything on that rig so the whole deal was finding the school.

“That rig is one of the weirdest things I’ve ever seen; I call it the goofy rig. There’s going to be a lot of tournaments won on that thing.” 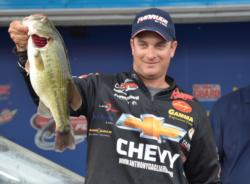 Anthony Gagliardi caught a 24-pound, 9-ounce stringer Sunday to finish the tournament fourth with a total weight of 74 pounds, 1 ounce. Gagliardi too was using the A-rig and claims he was the first FLW Tour pro to purchase one.

“I bought some at the Chevy Pro Night before the Pickwick event,” Gagliardi said. “I threw it some at that tournament so I knew they’d bite it, but I didn’t realize the potential.”

Largely due to the reports of a tough practice, Gagliardi thought he was in good shape midmorning the first day with 13 or 14 pounds fishing grass edges. He then spent the rest of the day flipping, looking for an upgrade.

“Looking back, I could’ve really improved my weight with the Alabama rig. I’m kicking myself for not fishing some stuff harder. But I also got more and more tuned into that rig as the week went on.”

Gagliardi fished Preston Creek and Mill Creek. On the final day, he wanted to stay in one area and probe it thoroughly – that turned out to be Mill Creek. It was a wise decision as he caught his three biggest fish after 1:30 in the afternoon.

“If you could find some shad in the backs of pockets and get it in front of them, they would bite it every time. The Alabama rig is something I am definitely going to keep in my arsenal.”

The Prosperity, S.C., native said he employed two different setups – a heavier one with big swimbaits and a lighter one with smaller swimbaits. He used mostly Buckeye JWill swimbait heads and either Keitech Swing Impact swimbaits or Jack’s swimbaits, a knock-off of the Skinny Dipper. The Chevy pro earned $24,288. 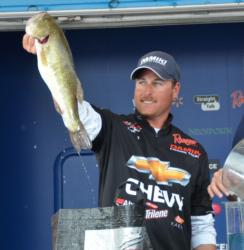 Bryan Thrift started the final FLW Tour event of the year by cranking shallow grass with a Damiki DC 100. He had moderate success with it the first three days – making the cut but never threatening for the top of the leaderboard. That all changed midway through the third day.

“I caught a 14- or 15-pound limit on day three cranking and then I picked up that Alabama rig and culled everything with it,” he said. “There’s no doubt that bait catches fish that no other bait can catch.”

From there, it all clicked as the 2010 Angler of the Year worked the A-rig in the backs of creeks. His specific rig consisted of two 5-inch swimbaits and three 4-inch swimbaits – all of the Strike King Shadalicious variety. Thrift presented the rig in anywhere from 8 to 15 feet as he focused on following bait. He spent most of his time in the Town Creek area of the lake. After making the switch, he upgraded his day-three catch to 18 pounds, 6 ounces and caught 22-8 on the final day.

“I know I caught 20 4-pounders today; it was absolutely ridiculous. If I didn’t have to go Texas I’d stay here for a few more days and just whack on them.”

Rounding out the top 10 pro finishers at the FLW Tour event on Lake Guntersville: