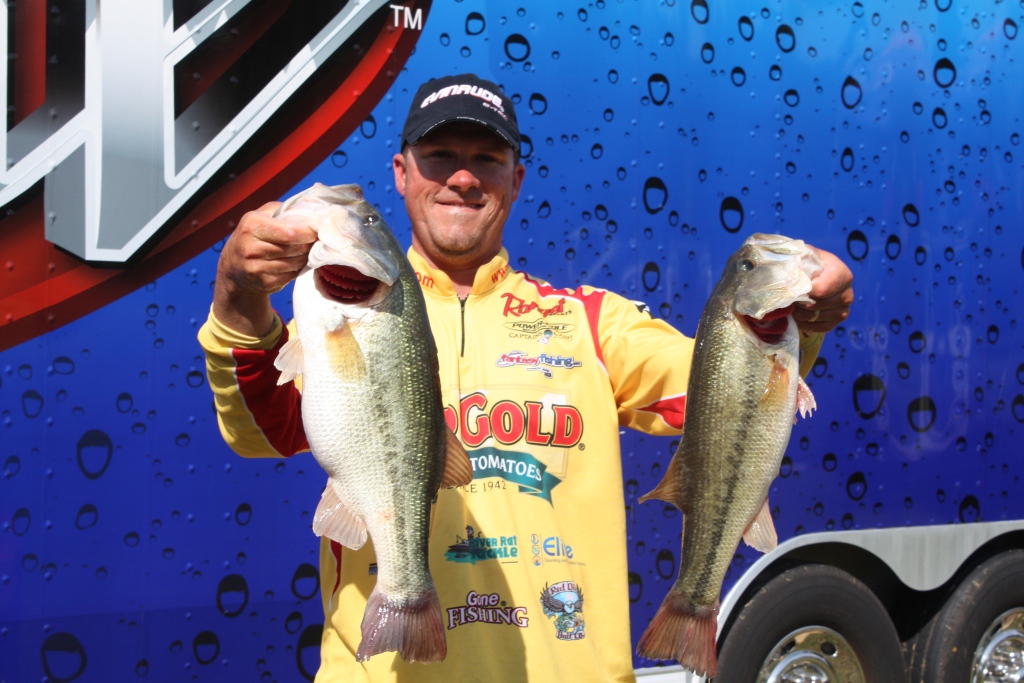 Hollowell’s five-bass limit totaling 19 pounds, 5 ounces barely edged out local pro Terry Bolton of Paducah and Jacob Wheeler of Indianapolis, both of whom weighed in limits worth 19-3. As usual, the fishing on Kentucky Lake was red hot, as nearly 200 limits and more than 3,000 pounds of bass were brought to the scales today by pros and co-anglers.

The twin fisheries of Kentucky and Barkley lakes are offering a smorgasbord of opportunities this week, as one can fish this lake or that lake, run north, run south, stay close, fish deep, fish shallow, fish grass … the possibilities are endless, and Hollowell sampled quite a few of them today.

“I fished the whole lake, from here to New Johnsonville,” he said, referring to the Tennessee hot spot frequented by more than a few contenders.

As for depth, “I’m doing both,” he said. “I saw fish were deep, but I also knew there was grass down south, and I love fishing grass.”

Hollowell caught around 20 keepers today and said he fished for his big bites later in the day.

“This lake is all about timing, trying to hit the right place at the right time,” he said. “I probably ran 130 miles up and down.”

Hollowell’s hodge-podge approach, though successful, was primarily a result of an illness he suffered in the days prior to the tournament.

“I wasn’t sure what to expect,” he said. “I only practiced a few hours.”

That said, Hollowell knows a thing or two about what he’s doing – he has a BFL victory and top-10 finish here as well as a top-10 showing at an EverStart Series event on Kentucky Lake.

Though local hotshot Terry Bolton of Paducah has fished these lakes for decades, he says this week it’s a whole new playing field because of the unusual depth – drought conditions have forced the water levels to around 2 feet below summer pool. 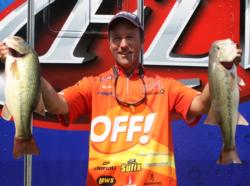 “I’m running around fishing like I’ve never done and thought I’d never do on this lake,” he said. “I’ve fished places I’ve never fished before. I did things I never really liked to do, but it worked.”

Bolton’s day-one haul of 19 pounds, 3 ounces were caught almost entirely in deep water, though he admits to catching a few shallow.

Bolton is tied with Jacob Wheeler for second and might have shot to the top of the leaderboard, but he missed a 5-pounder at the trolling motor.

“I’m fortunate to get all the ones I got in,” he said. “I’ve got four or five places I didn’t bother to go to today – I don’t know what’s there.”

Sharing second with Bolton is Fatheadz pro Jacob Wheeler of Indianapolis, also with a limit weighing 19-3.

“They weren’t pulling a lot of current, so I’ve been finding spots where the fish weren’t relating to the current as much,” he said. “They’re always, for the most part, eating.”

Wheeler fished ledges today, hitting three out of his seven schools of fish that he found in practice.

“I was fortunate to pull up on the right one,” he said. “Hopefully I can do the same thing tomorrow.”

Wheeler also benefited from a relative lack of company today.

“I was fishing an area that wasn’t as pressured,” he said. “I was fortunate to get a couple of big bites. I feel really good about tomorrow. I actually pulled off the school, so I’m pretty excited.”

Cox, Moynagh round out top five

In the fourth spot after day one is John Cox of Debary, Fla., with a five-bass limit weighing 18 pounds, 15 ounces. 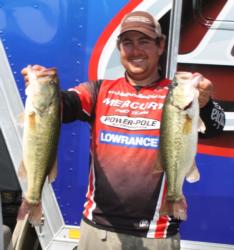 “I committed to fishing deep this week,” Cox said. “I’m kind of learning how to catch them that way. It’s all location here. Some spots have good-sized fish; some spots are all small fish.”

Cox said he hit two spots today and didn’t catch any small fish on his main hole. He caught his bass in the first half hour of the morning but said he didn’t do as well the rest of the day.

Jim Moynagh of Carver, Minn., sits in the fifth position with a limit weighing 18-11.

Rounding out the top-10 pros after day one:

Taking a decisive lead in the Co-angler Division is Casey Martin of New Market, Ala., who brought in the heaviest stringer of the day – an eye-popping limit weighing 22 pounds, 12 ounces caught from the back of Chad Grigsby’s boat. Grigsby won this event last year. 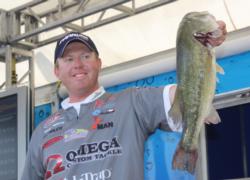 “I tried to stay out of the way,” Martin said. “I guess I just had the right bait.”

Martin owned up to catching his bass on a Picasso lure, though he was understandably reluctant to give specifics. He and Grigsby were fishing offshore ledges.

In the No. 2 spot among co-anglers is Mark Myers of Cedar Falls, Iowa, with a five-bass limit weighing 18 pounds, 15 ounces. He fished today with pro Travis Loyd and said he could not have asked for a better partner.

“Every spot we were on, we caught fish,” Myers said.

The two were fishing mid-lake on Kentucky, with Myers throwing a Lethal Weapon Drag Queen football jig as well as some plastics. He said his fortunes tomorrow depend largely on his draw, though he may have figured out a thing or two.

“I’ve got a combination of baits that’s working on deep fish,” he said. 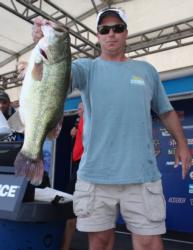 Kurt Chelminiak of Delafield, Wis., caught five weighing 18 pounds to take third. In fourth is Jeff Sprague of Forney, Texas, with five weighing 17-4. Behind him in fifth is Bob Ebel of Concord, Calif., with a limit weighing 17-3.

Today was quite a banner day for co-anglers, as not only was the day’s heaviest stringer caught from the back of the boat but also the day’s heaviest bass. Matt Krekovich of Granite City, Ill., weighed in an impressive lunker worth 7 pounds, 9 ounces that helped propel him to sixth place.

Rounding out the top-10 co-anglers after day one: