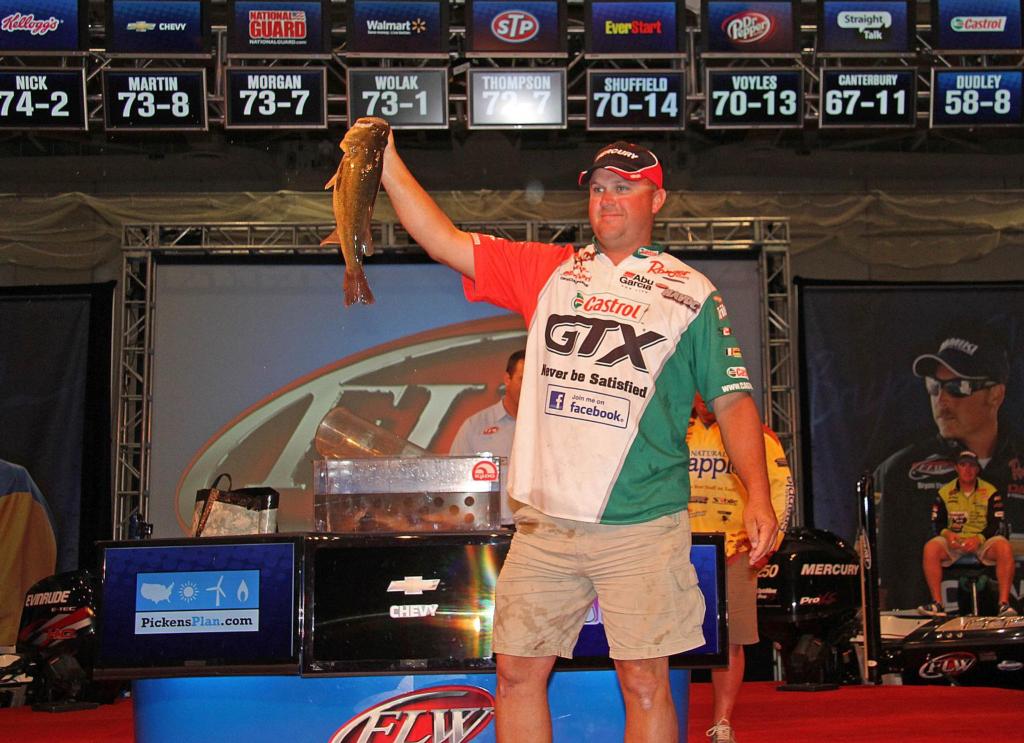 PLATTSBURGH, N.Y. – David Dudley makes no bones about the fact that he went through a slump. But if anyone needed evidence to prove that he’s fully recovered from that downturn, this would have been a good week to be watching.

Not only did the Castrol pro from Lynchburg, Va. win his second FLW Tour Major event of 2012 – this one on Lake Champlain, following an April victory on Beaver Lake – but he also clinched the Angler of the Year title. Notably, he’s tied with Texas pro Clark Wendlant for the most AOY titles (3), but Dudley also won the points race in 2011, so this year’s title gives him the distinction of becoming the only angler in FLW history to win consecutive years. All this, Dudley said, came after some serious soul searching and a firm commitment to recapturing the passion and precision that led to his first AOY 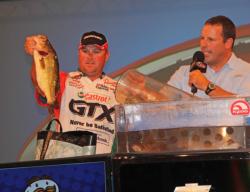 A few years ago, when he found his performance slipping, Dudley did a couple of things to get himself back on track: First, he upgraded his equipment by fitting his boat with PowerPoles and investing in new electronics with all the bells and whistles. That’s the hardware part. The other part, arguably the most significant, involved taking himself through an intensive refresher course on what it means to do this stuff for a living.

“In 2008, I got a pretty big head because I started looking at my stats and thinking, ‘Wow, I’m pretty good,'” Dudley said. “Then, in 2009, I did okay, but I faltered. After 2009 and into 2010, I realized I wasn’t doing something right. Typically, I never fish unless I have a tournament, but in 2010 I started bass fishing; going to lakes like Smith Mountain and Buggs Island. It’s like a runner who runs 5 miles. You can’t just get up and run a 5-minute mile without training yourself. I realized that so I started training myself again.

“Even though, I’m thinking about this win now, when it’s all said and done, I try to block it out of my head and get myself back to reality and say ‘Hey, I need to work harder than anybody else out there’.”

This week, Dudley’s work ethic paid big dividends, as he turned in a dominant performance during which he held off the persistent pressure of good friend and fierce competitor Jacob Powroznik who not only placed second in the tournament, but also finished right behind Dudley in the points race. Dudley stated several times that he feeds off the friendly rivalry he’s long enjoyed with his fellow Virginia angler, to whom he bestows high praise.

Perhaps this rivalry helped propel Dudley to his Champlain victory. In any case, the numbers were 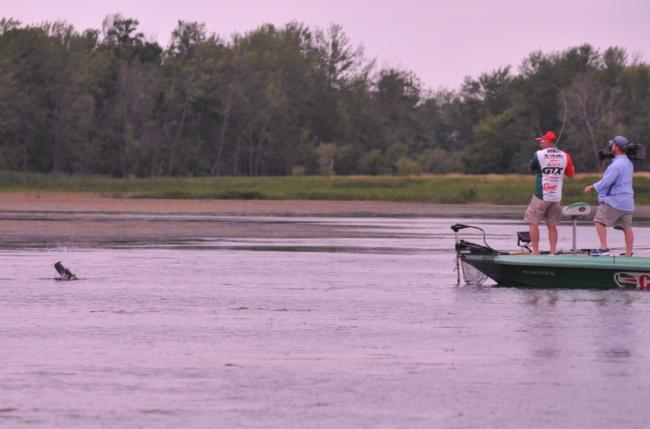 impressive. For starters, he led the show from start to finish. His day-one bag weighed 24 pounds and remained the event’s largest. Additionally, Dudley was one of only three pros to break 20 pounds twice. He caught an even 20 today and pairing these weights with his second and third day bags of 18-15 and 15-9, Dudley finished with 78-8 and a winning margin of 1-10.

In a week that saw many competitors, including most of his top-10 competitors running south to the largemouth-laden grass beds of Ticonderoga, Dudley opted to fish the lake’s north end. Fishing shoreline shallows in Missisquoi Bay, Dudley caught his fish on a wacky-rigged worm, a Texas-rigged Berkley Havoc Bottom Hopper and a chatterbait tipped with a Berkley Havoc Rocket Craw. Most of his bites came in a couple of feet of water and he rotated his baits based on habitat.

“I wasn’t fishing spots; I was just going down the bank and I’d just chose my bait based on what I came across, whether it was grass, wood, rock or whatever,” Dudley said.

Champlain’s bountiful waters hold loads of hefty smallmouth, along with largemouth of impressive quantity and quality. While the former roams the entire lake, the latter tends to be concentrated at either 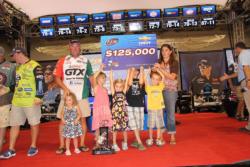 “What happened this year was everybody heard about the south bite and I think that took a lot of the pressure off the north,” he said. “I tried to grind it out up north and it paid off. I still think Ti was the place to be but it got overcrowded and I think that’s what hurt it down there.

“The first day I went up north and had a pretty good stringer that day,” he said. “I knew if I could expand on that a little bit, there were plenty of quality fish up north. Ti, right now, has the better population of fish than up north, but I still caught 50 or 60 today. This is just an incredible fishery, whether you’re north or south.”

Powroznik pushes up to second

Hailing from Prince George, Va., Powroznik caught the day’s second-heaviest bag (behind fourth-place Roland Martin) and his 20-pound, 8-ounce effort lifted his tournament total to 76-14. His week was one of consistency, as he never dipped below third place (day two) throughout the tournament.

Powroznik made the long run to Ticonderoga all week and caught his fish on a variety of baits, including 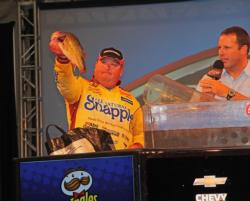 a squarebill crankbait, chatterbait, Texas-rigged Senko and a Spro frog. Today, the Senko produced a quick limit, but after a key location change, he put the frog to good use and stayed busy upgrading to his final weight.

On day three, he and fellow competitor Koby Kreiger had discussed an area where Powroznik had found thickly matted grass. Finishing 13th, Kreiger encouraged Powroznik to give the spot a look, as he had seen several large fish blow up in the mats.

“Today, I left what I was doing and went over there around 11:30 and I never moved the boat the rest of the day,” he said. “I mean, I didn’t move one inch this way or that way and I probably caught them on every other cast.

“It was just the biggest mat in the area and there was a lot of fish off the bank. They just moved up and down under the mat. I caught them until I couldn’t catch them anymore.”

Blake Nick, of Adger, Ala. also had a strong performance on Champlain. He started day one by bagging 19-10 and taking sixth place. He rose two spots on day two with 17-3, but slipped back to sixth a day later after catching 17-5. In the final round, his 20-pound bag allowed him to regain the spots he had 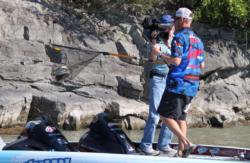 lost plus a little more, as he finished third with 74-2.

Noting that Ti’s grassy habitat reminds him much of Lake Guntersville back home, Nick said his knowledge of shallow grass habitat served him well in this northern lake. Nick’s final-round performance was particularly impressive, as his day was nearly derailed by a lost trolling motor prop – a setback that occurred before he could make his first cast. Fortunately, he was able to figure out a way to salvage his day by using a tactic with which he’s very comfortable.

“I had been catching them on a swim jig, but they got off of that,” he said. “I figured out that I could catch them on a squarebill crankbait,” he said. “It really wasn’t complicated. I did what I do.”

Martin moves up to fourth 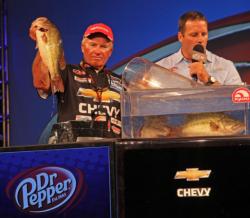 Things didn’t begin so well for Roland Martin, as the legendary bass angler from Naples, Fla. found himself in 68th place after catching 15-5 on day one. However, the cagey veteran quickly showed why he’s still a threat on any lake in the nation, as he improved to ninth on day two, held that spot for day three and them climbed up to fourth in the final round by catching the day’s heaviest bag – 21-9 – and posting a total weight of 73-8.

“I was fishing a jig in the grass (at Ticonderoga) and I got a 20-pound limit early and then all I could do was catch 3 ¾-pound fish one after another,” Martin said. “I couldn’t cull and get an advantage because they were all these little fish. I was hoping to get a 5- or 6-pound fish, but it just didn’t happen.”

Taking the fifth-place spot was Dayton, Tenn. pro Andy Morgan, who has racked up more top-10 finishes (51) than any other FLW angler. Morgan placed 14th on day one with 18-11, improved to 11th 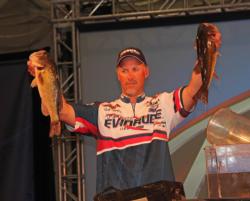 Morgan spent his first two days down at Ti, but he shifted gears on day three and joined Dudley in Missisquoi. He caught his final-round fish on a 1/2-ounce War Eagle jig with a Zoom Super Chunk trailer, a Spro popping frog, and a 3/8-ounce Strike King swimming jig with a Swimming Fluke trailer.

Rounding out the top-10 pro leaders at the FLW Tour Major event on Lake Champlain: