Wheeler is human after all, Chevy pros have a banner day and the ‘Chicken Dance’ rears its ugly head once again 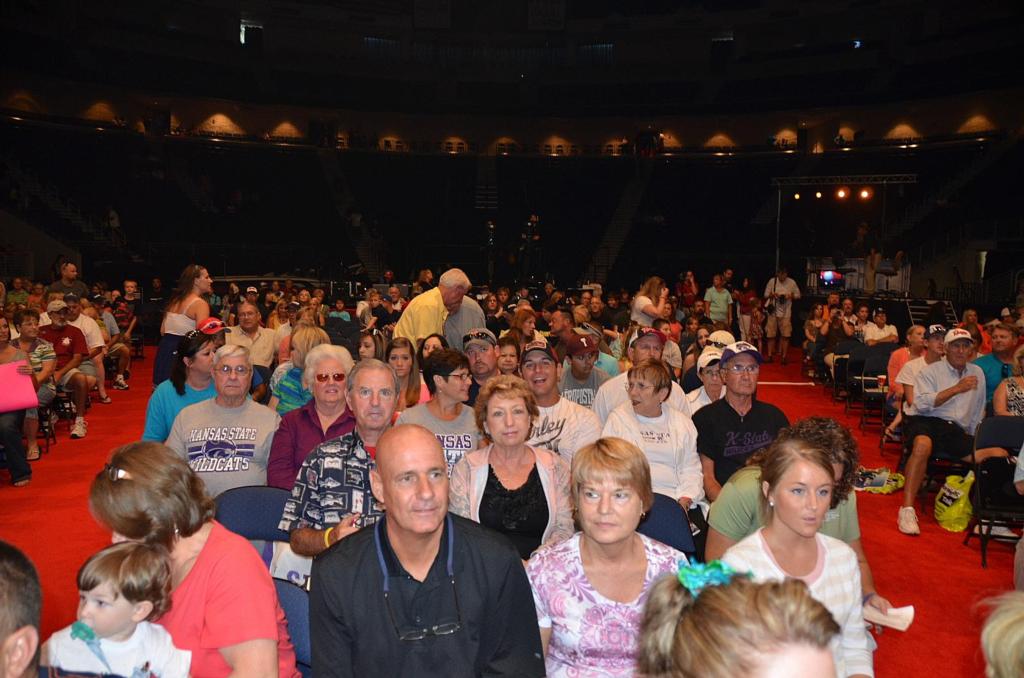 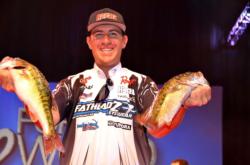 Wheeler comes back down to Earth … After stunning the field and electrifying bass-fishing fans everywhere with his amazing 21-pound, 15-ounce stringer during the opening round of 2012 Forrest Wood Cup competition, 21-year-old Jacob Wheeler found the going a lot tougher during Friday’s action. After playing it a bit more conservative during today’s contest, Wheeler only managed to record a five-fish limit of 11 pounds, 12 ounces – slightly better than half of his opening total. “I switched up my gameplan today,” said Wheeler. “I decided not to swing for the fences. I figured that if I could stay consistent over the next three days I’d still have a good opportunity to win the Cup. I told myself that I was going to go out there, fish my style and whatever happens, happens.” During the first day of tournament action, Wheeler landed five keeper largemouth bass that propelled him to his 20-pound-plus bag. However, today he targeted spotted bass, finishing the day with a total of four spots and one largemouth. While the strategy was to keep it safe and simple, a flock of veteran pros managed to make up some significant ground on the young upstart. After boasting a lead of 5 pounds, 6 ounces after yesterday’s competition, the young man from Indianapolis, Ind., is now holding onto a 3-pound, 3-ounce differential with two full days of competition remaining. So the question Wheeler undoubtedly will be asking himself tonight is: Did he play it too safe? 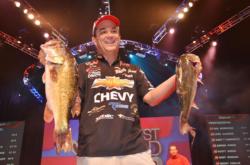 Yelas surges … Perhaps the biggest beneficiary of Wheeler’s modest catch in today’s competition was Chevy pro Jay Yelas. After recording the second-largest stringer of the tournament today at 18 pounds, 4 ounces, Yelas managed to vault all the way up the leaderboard into second place, finally managing to get within striking distance of Wheeler. “I had two good areas after practice and as it turned out, the spot I went to today was better than the area I fished yesterday. On Thursday, I (targeted) the main lake searching for schools of baitfish. But today, I ran way up river flipping shallow wood. After yesterday, I was kind of disappointed. But I had a good comeback today and hopefully I can continue that upward movement up the standings. Right now, sitting in second place, I think I’m in pretty good shape.” Yelas is also vying to become the first angler ever to win the Forrest Wood Cup, the Bassmaster Classic, the FLW Tour Angler of the Year award and the Bassmaster Angler of the Year award. Right now, the Forrest Wood Cup title is the only thing standing in his way of that accomplishment. 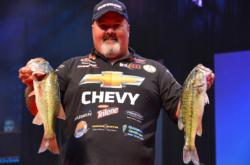 Chevy pros make their mark … In addition to Yelas, two other Chevy pros continue to perform at the top of their game – namely Dion Hibdon of Sunrise Beach, Mo., and Bryan Thrift of Shelby, N.C. On the strength of a 29-pound total catch, Hibdon currently sits in fifth place overall while Thrift (27 pounds, 7 ounces) resides in sixth place with two full days of Cup action remaining. Chevy pro Luke Clausen also qualified for today’s top-20 cut in 12th place with a total catch of 24 pounds, 3 ounces. As such, all four Chevy anglers have a legitimate shot at winning the 2012 Forrest Wood Cup. By contrast, the next closest sponsor team in terms of sheer number of anglers remaining is the National Guard team with two pros (Brent Ehrler and Scott Martin). 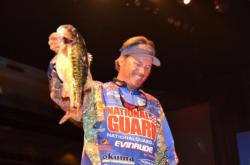 Cup repeat possible … Heading into the 2012 Forrest Wood Cup, six anglers had a chance of making history by repeating as Forrest Wood Cup champions – a feat that has never been accomplished to date. After today’s top-20 cut was announced, that number remains unchanged as all six pros advanced to Saturday’s semifinals. The list of past champions who still have a shot at repeating in 2012 includes: Dion Hibdon (2000), David Dudley (2003), Luke Clausen (2004), Brent Ehrler (2006), Scott Suggs (2007) and Scott Martin (2011).

Heartbreak hotel Kansas State style… After making history at the 2012 FLW College Fishing National Championship by becoming the first angler to ever win the championship while fishing solo (all the rest of the contenders were part of a two-man team), Ryan Patterson of Goddard, Kansas, set his sights on the record books once again this week. While no college pro had ever qualified for the top-20 cut at the Cup before, Patterson thought he had a legitimate chance to do just that during this week’s contest. However, despite a valiant effort, Patterson came up just short of his goal – finishing the Cup in 21st place overall, finishing an agonizing 1 ounce behind 20th-place pro competitor Glenn Browne of Ocala, Fla. However, despite his disappointment, Patterson took the turn of events in stride. “It’s just been an amazing experience fishing shoulder to shoulder with these guys,” said Patterson. However, regardless of the final outcome, Patterson proved that he can fish with just about anyone – even his idols at the Forrest Wood Cup.

Overcoming adversity … Heading into the 2012 Forrest Wood Cup, National Guard pro Brent Ehrler and Rayovac pro Jason Christie were nursing some significant injuries that seemed all but certain to have a negative impact on their performance. Ehrler was still struggling from the effects of a mid-July auto accident while Christie was fresh out of the hospital after enduring the ramifications of a nasty spider bite. However, when today’s top-20 cut was announced, both anglers had survived to fish another day – a true testament to their perseverance. 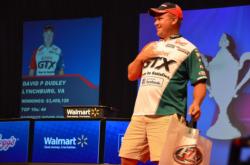 Chicken anyone? … Not only did Dudley turn in top-10 finish in today’s second day of Cup competition, he continued to turn heads with another rousing rendition of the “Chicken Dance.” For the second day in a row, Dudley entered the stage and engaged tournament host Chris Jones in an arm-locked twirl to the tune of the wedding song staple, much to the delight of the crowd. But this time, Dudley didn’t stop there. Appealing to the audience in a bid for increased participation, Dudley delivered fans a message: “Whoever I see out there who can out-dance me tomorrow is going to get a t-shirt.” Whether or not fans will take him up on his offer remains to be seen. However, one thing is clear, there will be a scene during tomorrow’s weigh-in … regardless. 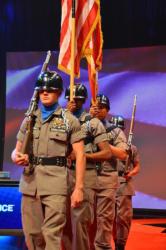 1: Total number of limits caught by co-angler field during the second day of Cup competition.

3-3: The total weight in pounds of ounces separating first-place pro Jacob Wheeler from his next closest competitor (Jay Yelas) after the second day of Forrest Wood Cup competition. 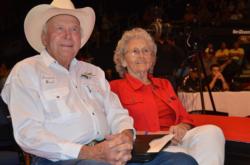 10: Total number of stringers recorded over 14 pounds during the first two days of 2012 Forrest Wood Cup competition on Lake Lanier.

167-10: Total weight in pounds and ounces of fish caught on day one by co-angler field.

433-8: Total weight in pounds and ounces of fish caught on day one by pro field. 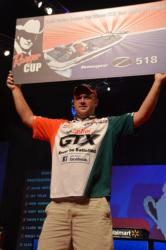 “This is not for doing the Chicken Dance I assure you,” – Bart Schad, vice president of sales and marketing for Ranger Boats while presenting David Dudley with the 2012 Ranger Cup award.

“This is why I fish so hard – I have a lot of kids and they eat a lot,” – Chevy pro Dion Hibdon joking about his tournament fishing motivation.

“The fish would just sit under my Ranger boat and they wouldn’t do anything,” Snapple pro Jacob Powroznik lamenting the difficulty of getting Lake Lanier bass to bite.

“Finishing in last place at the Cup is still better than sitting at home,” – Pro Craig Dowling finding the silver lining to his tough two days of Cup action.

“I had two great partners this week, David Dudley and Clark Wendlandt. Between the two of them, they have six angler of the year titles. And you can’t ask for more than that” – Co-angler Rob Hicks on his stellar draws at this week’s Cup.

“This is my Olympics,” Cheez-It pro Shinichi Fukae on his quest for a Forrest Wood Cup title.

“For the last two years I’ve been making good decisions. But if you’re going to make bad decisions in a tournament, it (helps) if it’s a tournament where they pay down to last place,” Straight Talk pro J.T. Kenney acknowledging the benefits of having a minimum Cup payday regardless of the outcome.

“If I didn’t do well today I told my wife that I was going to sell all of my tackle and start training for the 2016 Olympics in badminton,” – Co-angler Rich Dalbey.

“You know when you have days where everything goes right? Well today was just the opposite. It was a good year for me but an awful tournament,” – Pro Blake Nick on his disappointing finish at the Cup.

“I broke the cardinal rule of fishing, I caught a fish on my first cast. For the rest of the day, I didn’t catch another fish,” – Co-angler Corey Leonard perfectly summarizing the superstition of many anglers.

“I never thought I’d be standing here; I’m just an ordinary guy,” – 2012 TBF National Champion Gilbert Gagner on how tremendous the experience was to get to fish the Cup.